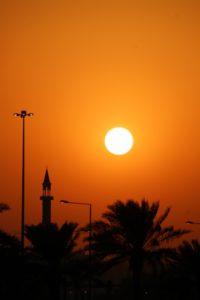 minaret along the Corniche of Doha at sunset

We spent two days in Qatar, visiting relatives, after our Iran trip of September/October 2016. Great opportunity to also check out this small Arab country, with surprisingly good results! To the effect that we came back in February 2017, once again on the way home, this time from Oman. After a brief introduction, we look at Doha, and then at some of the sights outside Doha, including the Khor Al Adaid inland sea. A seperate entry shows some of the treasures of the spectacular Museum of Islamic Art. In fact, there is enough to do in Qatar to keep you busy for a couple of days, or even more. 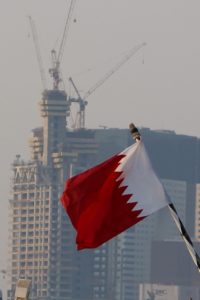 the flag of Qatar, in front of ongoing construction

Introduction: For most people Qatar is perhaps not the first travel destination that comes to mind. With only 1% arable land, the rest desert, and with daytime temperatures from March to December well over 25 oC and summer temperatures regularly over 45 oC, the geographical and climatological parameters aren’t the most favourable for tourism. The legal framework, a mixture of civil and sharia law, is also not very inviting, with the death penalty specified for homosexuality as well as for apostasy, severe prison sentences for blasphemy and proselytizing, and stoning and floggings for such major offenses as adultery and alcohol consumption.

However, writing off Qatar as a travel destination would be a mistake. For starters, the strict laws regulating liquor apply to Muslims only, and some 5-star hotels do serve their non-Muslim guest alcohol on request. Foreign residents, who make up more than 85% of Qatar’s population of about 2 million, can apply for alcohol permits, which allows them to buy the stuff, in quantities defined by a percentage of their income (!!!). And it may be hot and dusty outside, every conceivable closed space is air-conditioned – and there are even plans to provide air-conditioning for open air events, like the FIFA Football World cup in 2022. 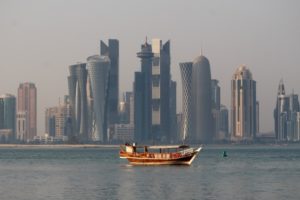 Doha skyline, and a traditional dhow in front 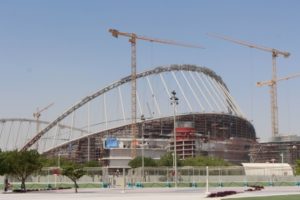 It wasn’t always like this, of course. The desert peninsula may well have been inhabited for over 50,000 years, and stone age tools and petroglyphs from 4000-5000 BC, found in coastal settlements, indicate an early position as trade centre. In the 3rd Century, Qatar rose to importance thanks to its sought-after export products, pearls and purple dye, a unique dye made from sea snails. Especially the Second Persian Empire showed much interest, which in those days came with political control, which only ended with the Arab conquest of the 7th C. Several periods of Ottoman rule followed, first in the 16th C and for a second time at the end of the 19th C, but with the collapse of the Ottoman Empire after WWI the country became a British protectorate. Independence followed in 1971; by then, pearls and purple dye had been replaced by oil, and especially natural gas, of which Qatar has a lot – a country about a quarter of the size of The Netherlands sits on the 3rd largest natural gas reserves of the world. Which pays for all those foreign workers, and for all the air conditioners. 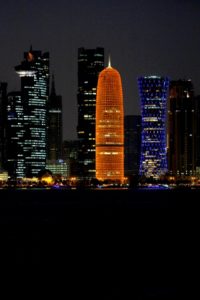 Doha: Almost everybody in Qatar lives in Doha, the capital and quite an attractive city. Its skyline of high rise modern buildings, seen from the Corniche at the opposite side of the bay that forms Doha’s natural harbour, is very impressive, yet, a lot less ostentatious than in many other comparable cities; it is just no só high, not só big. Somehow, Doha has retained a bit of a provincial atmosphere – and that is meant as a compliment! In some of the older neighbourhoods – nothing is really old, of course – narrow streets are blocked by the cars of residents doing a bit of shopping in the neighbourhood shops – there are neighbourhood shops.

The Souq Waqif is nicely restored, tastefully, too, yet, has not been turned exclusively into a designer outlet; local business seems to be thriving, and at the end of the day it is busy with shoppers. 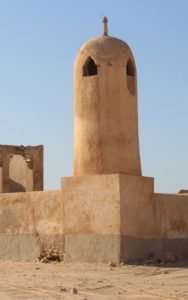 Outside Doha: And the rest of the country? Plain desert? Mostly, but that doesn’t mean that there is nothing to see. Having a long-standing interest in all matters rock-art, I had to see the petroglyphs of Jebel Jassassiyeh. These rather mysterious rock carvings have not been conclusively dated, neither have they been well-described, it seems. Apparently, there are some 900 of them on the ‘jebels’, the sandstone outcrops in the coastal desert in the northeast of the peninsula (as well as others, in other locations in Qatar). To call them petroglyphs is perhaps misleading… 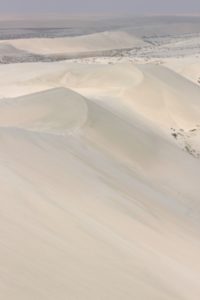 Khor Al Adaid: The Khor Al Adaid is Qatar’s prime natural beauty spot, located to the south of Doha, on the border with Saudi Arabia. Popularly known as the Inland Sea, it is in fact not an inland sea (like the Caspian, for instance), but a lagoon with a connection to the Arabian Gulf. Surrounded by extensive dune fields and salt flats, only accessible by 4WD, this sounds like the ideal retreat for those seeking the virgin desert environment, peaceful, idyllic and romantic. Indeed, it has been on a list of tentative Unesco World Heritage Sites since 2008, on account of its “diverse scenery of exceptional, undeveloped natural beauty, in what remains predominantly a ‘wilderness area”

the night skyline of Doha