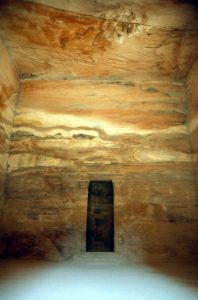 sandstone sedimentary patterns inside one of the tombs in Petra, Jordan’s foremost archaeological site

In 1992 we spent a week in Jordan. It is long ago, I have few memories, and even fewer notes of that trip, but enough to share here, with a couple of photographs (scanned slides, that have been discoloured a bit over time, prior to scanning) .

We arrived in Amman from Egypt, just before Christmas, and we will never forget that Christmas. It was our first experience with a Muslim culture, that too. 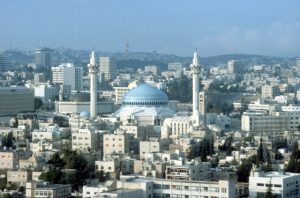 When we left, a few days later – we had rented a car, and took the so-called King’s Highway to Petra, Jordan’s foremost tourist destination -, the manager of the hotel insisted that we would pass by the health clinic of his brother, who was a doctor, with was more or less on the way. The doctor received us, treated my wife’s back problem, insisted that we would enjoy the sauna and spa facilities for a couple of hours, and wished us a Merry Christmas. He refused to charge us.

Coming from a Western culture, we were not used to that sort of kindness. 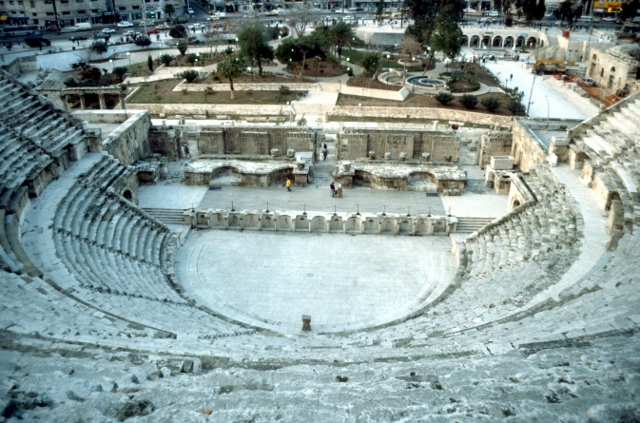 the Roman amphitheatre, the only archaeological remnant in Amman

About 50 km north of Amman is Jerash, with the remains of an important Roman settlement. Although the city was already prominent during the times of Alexander the Great, it received a major boost when around 100 BC the Romans annexed the Nabatean Kingdom – rulers of Petra, see below. Jerash became a trade centre, and extremely wealthy in the process. Until the third C AD, when overland trade was more and more replaced by marine trade, and Jerash started its decline.

At the time we visited you would enter the site on an oval-shaped forum – the ancient market place -, lined with Ionic columns. One of the most impressive sights I remember is the Colonnaded Street, that leads to the temple ruins deeper inside the complex. And as every self-respecting Roman site, Jerash, too, has its amphitheatre. 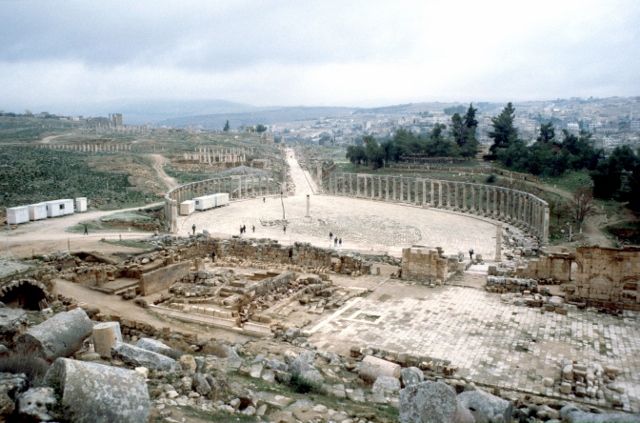 an overview of Jerash, the remains of a Roman city 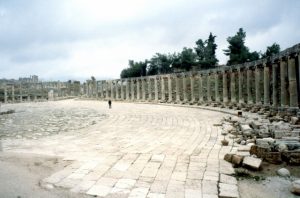 the oval-shaped forum, lined by columns 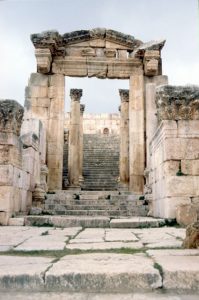 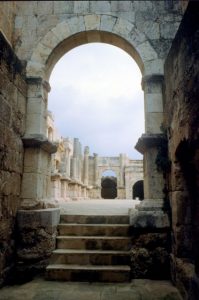 an arch towards the stage of the amphitheatre 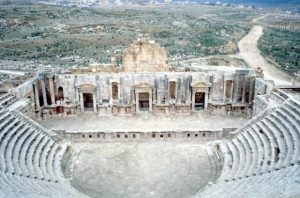 the amphitheatre in Jerash 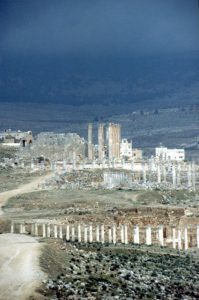 the tall columns of the main Artemis temple 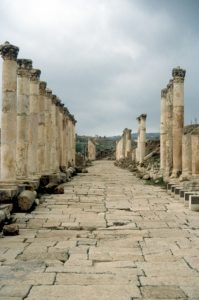 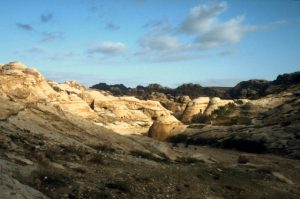 the views, before the fog sets in

There are two routes south of Amman, the Desert Highway, which is precisely that, a highway through the desert, and the far more picturesque King’s Highway, twisting and turning through the mountains in the direction of Petra. No points for guessing which one we took. Which turned out a lot less picturesque, because the entire way we drove in a dense fog, from which it miraculously, snowed, as well. We couldn’t see more that 10-20 meters ahead, and it took us the whole day to cover the approximately 270 km to Petra. I seldom had a more horrible driving experience than this trip.

There are more places in the world where relatively soft rock has been worked into tombs, churches, temples and other buildings. Whole troglodyte villages have been created. But few, if any, are so expressive as the outside temple-like facades of Petra. 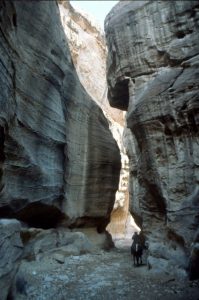 entrance to the Petra archaeological site 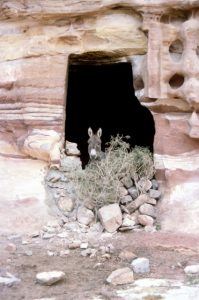 a donkey keeping watch in Petra

In fact most of these represent tombs, although some of the minor caves may also have served as dwellings, constructed during the height of the Nabataean kingdom from the 2nd C BC to the 1st C AD. The entrances are carved out of the sandstone. Inside, most of them are just square, hollowed out chambers, perhaps with a bench left here and there, but for the most part not decorated. Access to the best part is through a narrow canyon, in places less than five meters wide with walls rising 200 meters. Which makes the site a lot less interesting for mass tourism, because no motorised traffic can enter; most people will walk the 45 minutes or so through the canyon, called the Siq, to the first major temple, the Khazneh, the treasury – so called, probably, because of the local myth that it was used by pirates to hide their treasures. The alternative is travelling by rented horse or camel.

From the Khazneh the wadi in between the mountains widens, and leads to an amphitheatre, and many more tombs and caves, in fact a whole area to explore. Which, of course, we did, but didn’t do enough, at the time. Although one extraordinary feature we did visit: on a hill side to the left of the main wadi an obelisk has been constructed, but then such that the entire mountain around it has been removed! Imagine the amount of work! Obviously considered worthwhile at the time, to equip the sacrificial platform here. 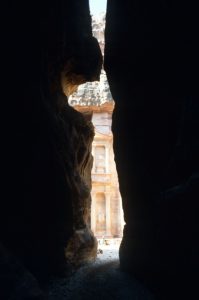 the Siq, with the Khazneh in the back 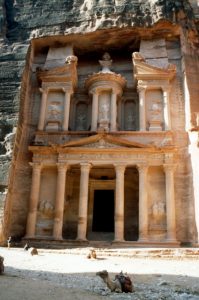 full view of the Khazneh 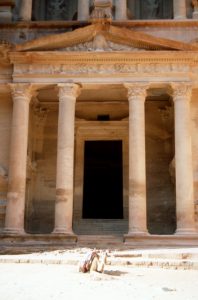 entrance of the Khazneh 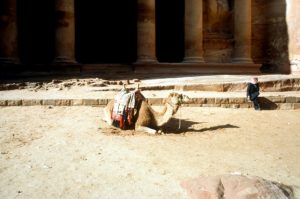 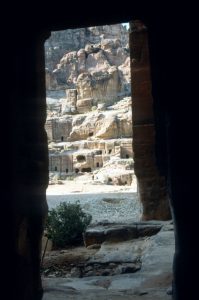 more tombs in the distance 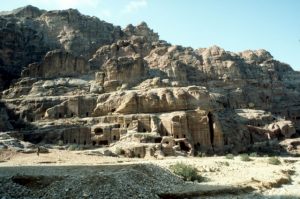 same ones, now in full view 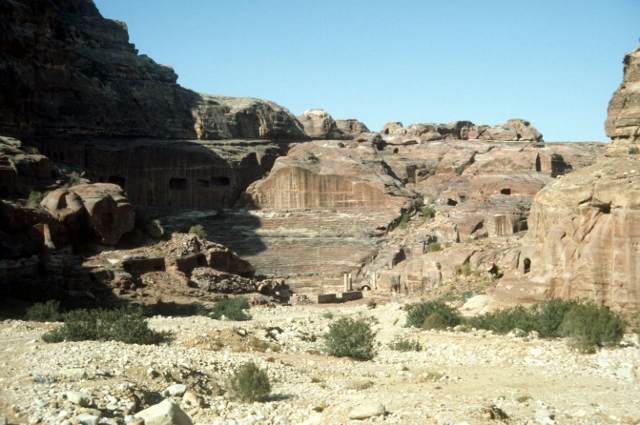 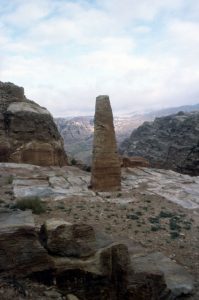 the obelisk (actually, one of several) 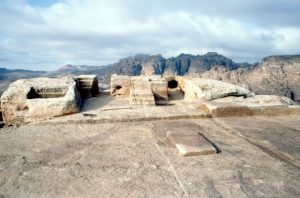 and the sacrificial platform 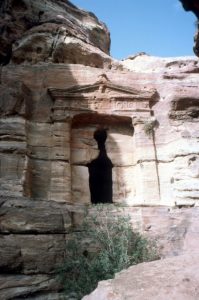 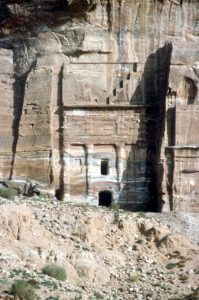 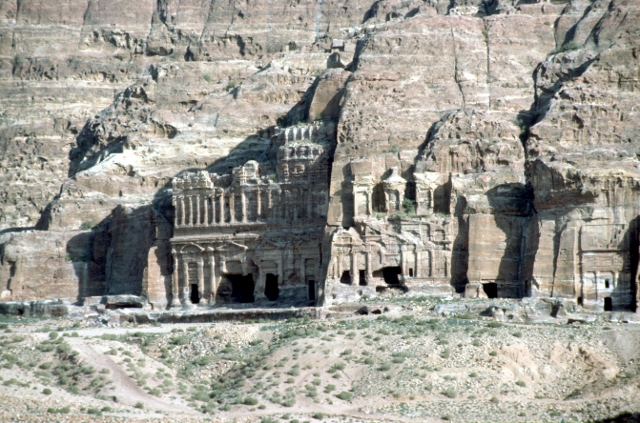 another series of tombs, the Palace Tombs 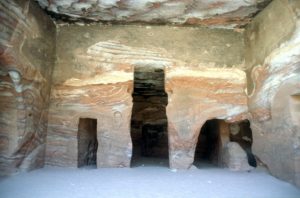 inside the tombs are rather Spartan 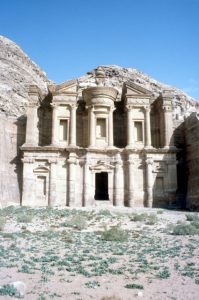 this structure is called The Monastery (El Deir) 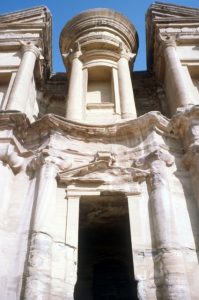 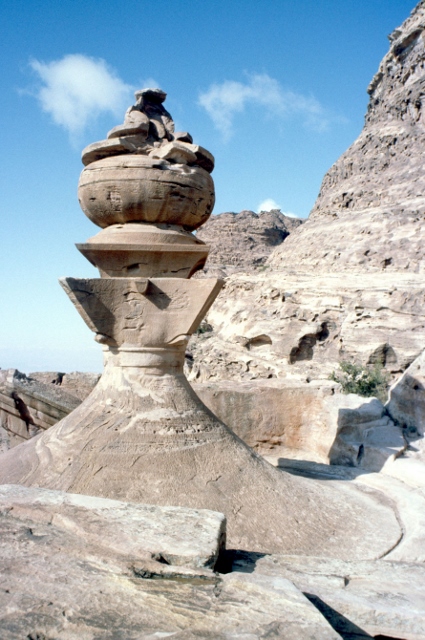 and with a huge inverted urn on top – carved out of the surrounding rock, entirely!

Unfortunately, part of the photographs I took have been lost over the years, between the various moves from country to country. So no photographic evidence of the continuation of our trip, to Aquaba on the Red Sea, and by ferry to Nuwaiba, back to Egypt, on the Sinai peninsula on the opposite shore. In the days that this was a perfectly safe option to travel back to Cairo.