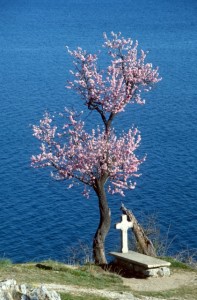 life and death at the shore of Lake Ohrid

At the end of two years Albania we took our car, and drove down to Turkey, where we had spent time earlier. The plan was to travel along the Mediterranean coast, see much of Classical Turkey, as well as some highlights we hadn’t seen yet, inland, and then return to Albania via Greece, and the Peloponnesus.

The road to Turkey took us through Macedonia, where we spent two nights, one in Ohrid and one in Skopje. On account of the developments in Albania just before, and just after we left, we were not entirely focused on the journey. I have kept no notes, and I have only a couple of photos left, so this will be one of the humbler pages of the site – at least until we decide to return one day, and do a more thorough job. 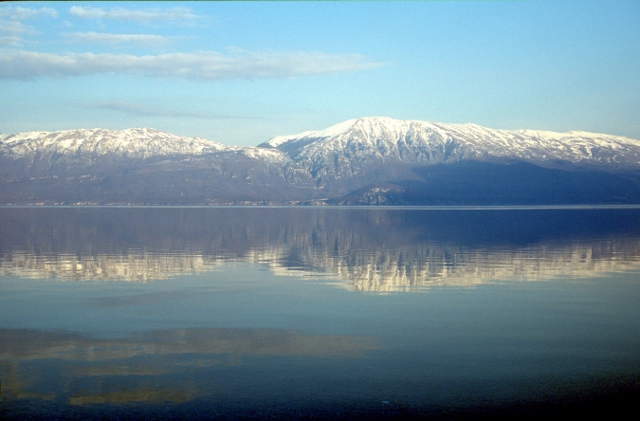 Lake Ohrid and snowy mountain slopes all around 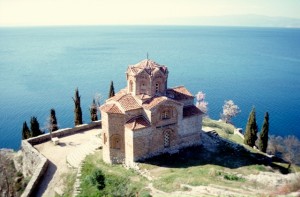 the Saint Ioan Church near Ohrid

We enter Macedonia from Pogradec on the Albanian side, and drive along the shore of Lake Ohrid. The lake, a very deep body of water in between Albania and Macedonia, is a fabulous blue, ringed by lightly snow-covered mountains. It is March, still pretty cold in this part of the world. The countryside is not much different from Albania, with small mountain villages half-hidden in valleys of the steep mountain side that borders the lake – classic half-graben. Minarets of the local mosque give away the dominant religion here, although a couple of old churches survive as well, amongst them the spectacular orthodox Saint Ioan Kaneo church on a promontory high above the lake at the town of Ohrid. This is where we spend the night, not much to do around town as the tourist season has not yet started. In any case, in 1997 there wasn’t much of a tourist infrastructure to speak of, in the first place. 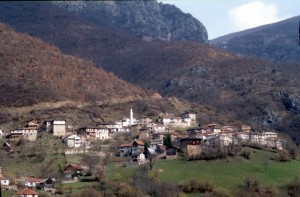 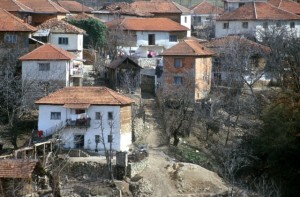 like in Albania, big houses, but no infrastructure to speak of

As so many places in this part of the world, Ohrid has belonged to several empires through history. In Greek times there was already a settlement at the lake, and the town was prominent on the Via Egnatia, the Roman road that connected Durres on the Adriatic with Byzantium, as Istanbul was called at the time. Slavs arrived in the 6th Century, and were replaced by the Bulgarians, who made it their capital of the First Bulgarian Empire, around the first Millennium. They also established an Orthodox Patriarchate (later downgraded to Archbishopric)  in the town, which formed the basis for its religious position throughout the Middle Ages, when it was known as the Jerusalem of the Balkan on account of its many churches, 365 in total, one for every day of the year. 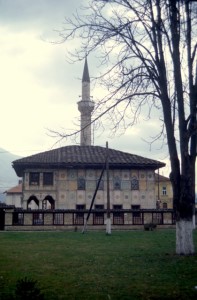 the ‘painted mosque’ in Tetovo 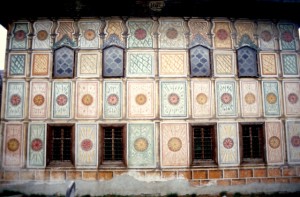 the painted panels of the mosque

From Ohrid we drove on to Skopje the next day, passing through Tetovo. Not because it is the heartland, and the unofficial capital, of Macedonian Albanians, but because of its world-famous “painted mosque”. This is an originally 15th C early Ottoman mosque, beautifully decorated on the outside with painted panels. 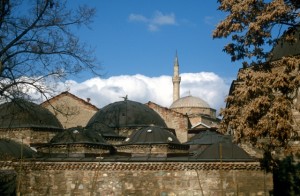 I don’t have many memories, neither photographs, from Skopje, other than that it was a rather provincial town at the time, and especially on the rainy Sunday morning we were there, rather abandoned. As Scupi, the town reached some level of importance in Roman times, but was destroyed by the worst earthquake Macedonia ever experienced, in 518 AD. Yet, in the 10th C it had sufficiently recovered to serve as Bulgarian capital for w while, before Ohrid took over. But its heydays were during the early Ottoman occupation, until the end of the 17th C, after which it was returned to ruins again, this time by the Austrians in what was called the Great Turkish War. Yet, the city once more rose to prominence, albeit slowly, and at the end of the 19th Century became a centre of nationalistic resistance against the Ottomans, who finally left during the First Balkan War in 1912. Serbia took over Skopje, only to be replaced by invading Bulgarians during WWI. After the war Macedonia became part of, ultimately, the Yugoslav Kingdom, which felt more like yet another occupation, this time by a repressive Serbian elite. WWII brought more invaders, German and Bulgarian, once again, until liberation in 1944, and incorporation in the Yugoslavia of Tito.

So I now feel for the Macedonians. Notwithstanding the political mess they have made of their own country since the breakup of Yugoslavia, through the usual corruption, and the ongoing conflict between ethnic Albanians and Macedonians, they should be allowed to, for the first time, carry the name of their independent country with pride, but instead they have been forced to call theirs FYROM, for Former Yugoslav Republic Of Macedonia. And that only because Greek sensitivity over the name Macedonia, also the name of a region in Northern Greece. But probably even more so because of history, the Greeks not going to admit that Alexander the Great was in fact Macedonian, not Greek. 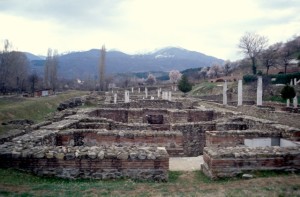 the Roman ruins in Stobi 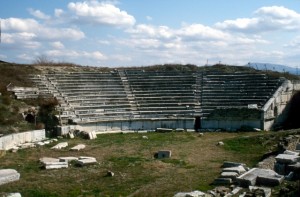 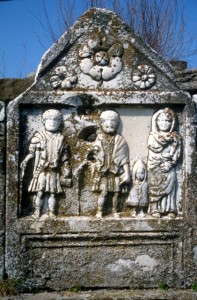 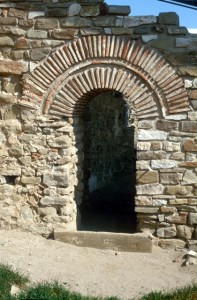 On the way from Skopje to the Greek border and Thessaloniki, we passed by Stobi, a relatively well preserved Roman provincial capital town. Once again, it is long ago that we were there: I remember that much of the site was off-limits because of ongoing archaeological excavations. Yet, the ruins visible were impressive, covering a large area, and with lots of columns still – or again? – standing. The site also contained an amphitheatre, of which quite a lot was still in good condition, especially considering that the site was destroyed by the same 518 earthquake that did Skopje. Carved reliefs and intricately laid mosaics add to the attractiveness of Stobi, as did, at the time, the fact that there were no tourists whatsoever.

From Stobi, it was another hour or so to the Greek border, and to the end of our brief encounter with the FYROM, or just call it Macedonia. A place to come back with more time, one day. 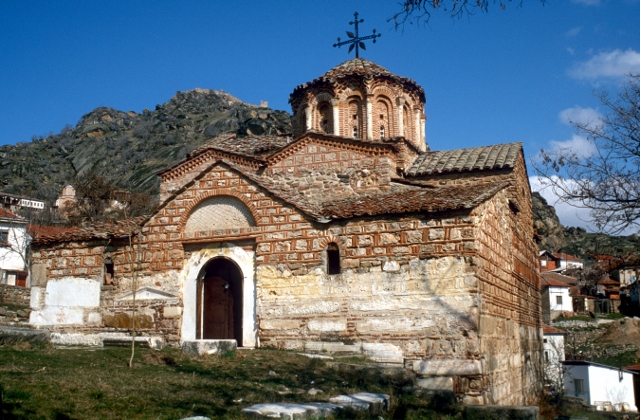 another orthodox church. near Stobi