(2) History of the Harbours 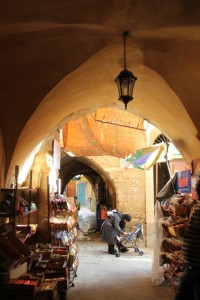 Past glory of the ancient Phoenician city states, precursor to Lebanon, can still be found in Roman, Byzantine, Ottoman and home-grown Lebanese relics in the harbours along the coast, and a little land-inwards in the remarkable Beit-ed-Din palace.

The Lebanese coast is full of small towns, fishing harbours mostly, with a long and rich history. This is where, as much as seven thousand years ago, the Phoenicians lived, in small city states, long before the dominant empires of the Mediterranean established themselves. A sea-faring people cut off from the interior by high mountains, they focused on trade, helped by the world-famous cedar trees that grew on the slopes of these same mountains, and that provided not only wood for ship building, but also a sought-after export product. Because the individual cities never joined each other in a political entity, preferring to stay independent, they never formed a real threat for the early empire builders of the region, like the Egyptians, the Hittites, the Babylonians and the Assyrians, and for most of the time they managed to maintain this status quo. Until Alexander the Great, on his way to Egypt, conquered all of the Phoenician harbours, sometimes through enormous effort. End of independence. After the Greeks, the Romans came, and as so often they have left the most impressive legacy in terms of architecture. The Romans consolidated the land under their rule, and they, too, had no time for small, independent city states (as readers of Asterix & Obelix may well recall).

The rise of Islam provided a whole range of new rulers to the Lebanese coast, but not only that: the perceived threat to the so-called Holy Land next door initiated the Crusades, and Lebanon and its convenient harbours happened to be on the way. A string of Crusader Castles, often utilizing if not cannibalizing the Roman structures, was the result – as well as a long and enduring relationship with France, which through what was then known as the Franks was seen as the leading force behind the Crusades. Ultimately, of course, the Arab Muslim forces were victorious, and what is now Lebanon was brought under Saladin’s empire, followed by Mameluk and ultimately 400 years of Ottoman reign. From this time stem the many examples from exquisitely executed Islamic architecture, whether mosques, madrasses, hammans or other buildings, in many of the coastal towns and beyond. 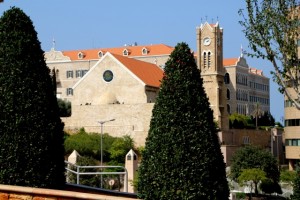 The Ottoman rule allowed sufficient autonomy for its Lebanese province to retain its own identity, not in the least because of the many Christian groups that managed to survive here. The old commercial spirit led to the establishment of an extensive silk industry, focused on growing silk worms and producing raw silk, for export to mostly France. Quite a few people became very rich in the process, which is demonstrated through the many huge patricians’ houses that can be found all along the coast. Ultimately, the Ottomans were defeated in the First World War, and France took up the mandate from the League of Nations to govern Lebanon, and Syria. They created the present-day outline of the country, uniting all the harbours and the westward slopes of Mount Lebanon with a hinterland that hitherto had not been a natural partner. They also created a political system with fixed representation for confessional entities, which protects the minority Christian Maronite faction of the country from Arab Muslim domination, but is also at least part-reason for the string of conflicts that has dominated this country ever since its independence, which came during the Second World War (a border with Israel, and undue influence of foreign powers through Lebanese interest groups is, no doubt, the other part-reason for the conflicts). It may also be the rationale for not doing any census anymore since the 1930’s: any such census may lead to demands of rebalancing of power, not unthinkable in an environment with poor Muslims having much larger families than Christians, and many Maronites emigrating. Given the recent history of Lebanon, such rebalancing is unlikely to be achieved peacefully. Roman baths in the centre of Beirut (2) 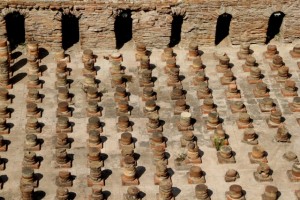 Roman baths in the centre of Beirut (1)

Where in the old days the various city states were comparable in size and power, even if one occasionally, and temporarily, dominated others, today Beirut outflanks them all. Beirut doesn’t have a cute little fishing harbour anymore, only a big, industrious port and a luxury Marina with million-dollar pleasure boats. And as I said earlier, many of the old houses have disappeared, either through war or project developers. However, even in this rapidly modernizing city history is preserved in the Ottoman era Grand Serail, a fabulously impressive building now housing government offices, in a former Crusader church which is now a mosque, and in the many traces of Roman occupation, most notably the extensive Roman baths. Parts of the Roman  road from the port inland have also been unearthed – although I find those less obviously recognizable. The Beirut river, a rather humble stream, at least in September, was once spanned by a Roman aquaduct, of which the two sides still exist, and I am sure there are many other places in town where Roman ruins can be admired.

South of Beirut, among banana plantations and endless orchards that about every ancient traveler has commented upon, are the towns of Tyre and Saida – Sour and Sidon in antiquity. What those travelers didn’t comment upon was the incredible amount of rubbish along the road, or perhaps this is a recent development. Everywhere is plastic, broken glass, anything that doesn’t easily blow away. And the beaches are equally littered. In any case the road from Beirut to the south is not very attractive, especially between Beirut and Saida the coastal strip is almost entirely build up, with industries along the coast, and the ubiquitous apartment buildings rising up the slopes, all claiming sea view at one stage, until somebody erects another building right in front of you. There does not seem to be a lot of planning going on. What is striking is that there are so many complexes unfinished, either having a concrete skeleton only, and no visible effort to continue, or being finished, but no sign of occupation. A few of those, right, but the mountain slopes are full of them, in places more than half of the buildings, thousands if not tens of thousands of apartments, are unfinished or empty. Who is ever going to live in them? 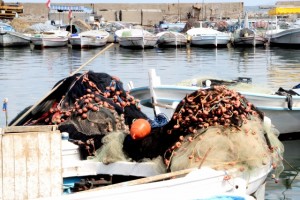 Nets in the Tyre fishing harbour 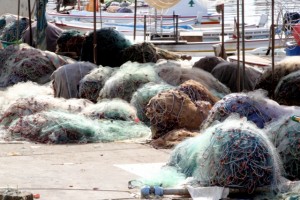 Fishing gear in the Saida harbour 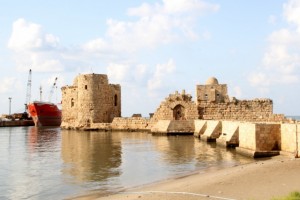 Saida’s Crusader castle guards the entry to the port

But Saida and Tyre are lovely little towns, Tyre a lot smaller then Saida. Both have a myriad of alleyways and small streets, the souk lined with shops, which, unfortunately were all closed when we visited, on a Friday after morning prayer. This is a predominantly Muslim part of the country, and it shows. But especially Saida’s old center, with various old Khans and Caravanserais, is attractively restored, a place to wander around for hours, through arched gateways leading to yet another sector of the old town. Both towns also have an attractive small harbor, mostly occupied by small fishing boats. The Saida harbor is guarded by a well-restored Crusader castle, certainly strategically positioned. Fishermen were busy mending nets, but not much else was happening during the day. A soldier walked up to me to point out that I could only take pictures of the harbour, not of the military barracks that he was personally guarding. As at the barracks, an unattractive dilapidated building, there was even less happening than in the harbor, I doubt whether any spy, much less any tourist, would ever want to waist his photos on this building. 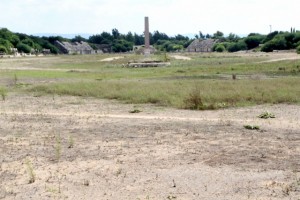 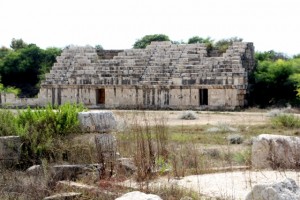 Part of the stands of the hippodrome 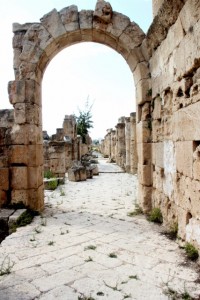 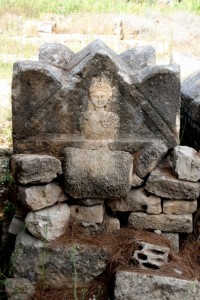 Decorated tomb in the Tyre necropolis

Tyre has a number of Roman ruins, of which especially the hippodrome – the largest in the world, apparently – is spectacular. Parts of the stands still stand, the central part of the racing area is covered with a rough mosaic, and an entry gate remains at the far end. The near end of the hippodrome borders a roman road, with traces of houses and shops, and arches, along what was the probable pedestrian part, raised slightly above the wider main street, probably meant for horses and carriages – who knows, like the ones used in the races. The extensive necropolis, containing sarcophagi and burial chambers from Babylonian to Roman times, is also very interesting, with many tombs decoratively carved and mosaics and marble floors still present in places in between the tombs. 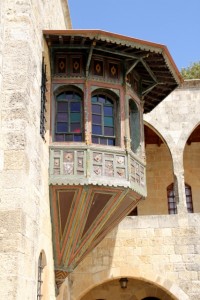 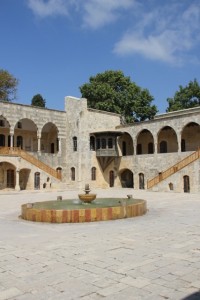 Central courtyard of the Beit-ed-Din Palace

Another southern port of note is Jiyeh, ancient Porphyrion, not because of what is there today – very little -, but because of what has been. In 1987, in the middle of the civil war, construction workers found a series of 4th and 5th Century floor mosaics from Byzantine origin. Rather than having them destroyed by bulldozers or smuggled out of the country by looters in the employ of opportunistic art dealers, the Druze leader Walid Jumblatt, an influential man in the area, and fortunately a man of culture, too, had the mosaics transported to his stronghold in the Chouf Mountains, away from the coast, and established a museum for them in the 19thCentury Beit ed-Din palace. 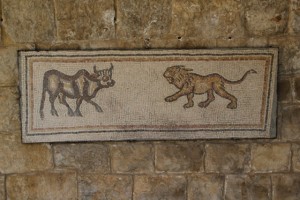 The palace, which had just been restored after devastating damage had been inflicted by an Israeli invasion, is now the ideal place to keep this unique collection of mosaics, fabulously displayed in part of the palace’s gardens and old stables.  A rarely visited part of the palace is the hamman – bath house -, an extensive network of marble-floored rooms and niches where, well, one could bath. A lovely little corner, this hamman would, without the palace and the mosaics, probably be a popular tourist attraction in its own right, but here it seems largely forgotten. 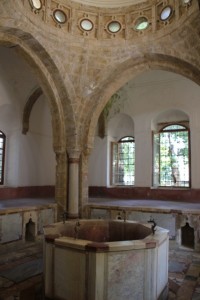 Hamman of the Beit-el-Din Palace 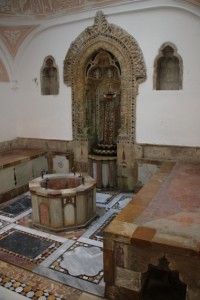 One of the rooms in the Palace Hamman

Nearby is the village of Deir Al-Qamar, which Colin Thubron, a perpetual travel writer, who came to Lebanon in 1967, well before the war described as dilapidated. Nowadays, as so often in Lebanon, the place has been beautifully restored, and the old town centre contains a range of attractive historic buildings – khans and palaces – around a small mosque. Especially some of the doorway decorations are impressive as examples of Islamic architecture from the 16-18th Century.  One of the buildings is being used as office for the municipality, but nobody cares if you walk in – which is what I did, including climbing to the roof for an even better view of the rest of the town. 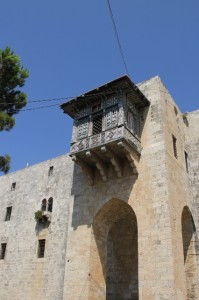 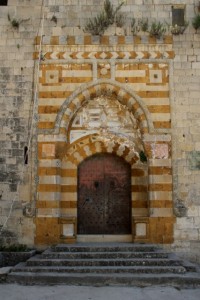 Old doorway of a building in Deir Al-Qamar

A little outside town is the Castle Moussa, a contraption so tacky that it becomes interesting again. Built by a man first frustrated in school by corporal punishment and later by the rejection of the woman he loved because he was not rich enough, he set out to correct the latter frustration. He indeed got very rich, could even afford to build a castle, but in the end was still rejected by the woman. Perhaps she didn’t like the collection mania of Mr. Moussa, who seemed especially awed by weapons.