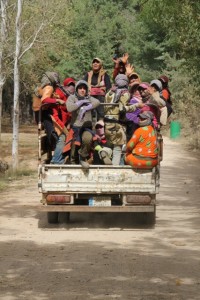 Harvesters on the way to lunch, in the Bekaa Valley

The Bekaa Valley is also a major wine growing area, with nice wineries around the town of Zahle. In fact, we conclude that, despite its complexity, Lebanon has a lot to offer besides its wine, thanks to good taste and a certain tolerance that is not immediately obvious from its history.

Zahle, the main town in the Bekaa Valley, has something of a reputation for food. We had lunch at one of the terraces that, apparently, fill up in the summer, the weekend and at night, but were now almost empty, along a muddy stream that further down was terribly polluted again – bottles, plastic, whatever people casually throw away after casual consumption. On either side of lunch we did a wine tasting; this is, after all, the area where Lebanon’s well respected wine comes from. Massaya, a trendy wine house relatively recently established with French partners, gave us the tour – which included seeing the grapes being loaded in the automatic wine press -, and then presented a couple of mediocre wines, a white that didn’t smell, and didn’t taste anything, and a few reds, all mixtures of grapes, no single cepage, and all pretty sharp in taste, whether the ordinary ‘Classic’, or the more upmarket – at least in price – Silver Selection and Gold Selection. 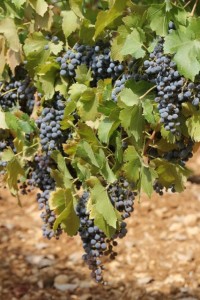 Grapes in the Beeka Valley, ready to be harvested 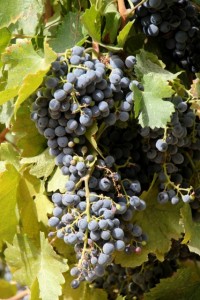 Lebanese Cabernet Sauvignon in the Bekaa Valley, ready to be harvested 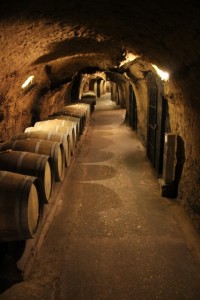 The caves of Chateau Ksara near Zahle 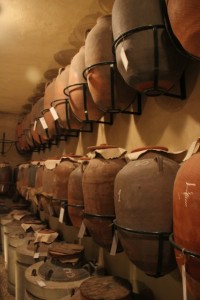 Chateau Ksara, which we visited after lunch, was in fact a very impressive, very slick, and very professional outfit. The oldest winery in Lebanon, they have a network of natural caves in which the wines, in barrels and later in bottles, are being stored to age. A short video explains the estate’s history, and the wine making process, and most importantly, they have substantially better wines than Massaya, as far as we were let to taste. Still, the impression lingers that the price/quality ratio of Lebanese wines is somewhat skewed, I would say, Lebanese wines being pretty expensive for what you get, not only compared to French or Spanish wines, but especially if compared to, say Australian or Argentinian wines. And I haven’t worked out why, other than to make excessive profits, they need to be so expensive, given that the climate is pretty stable, grapes grow anyhow, no problem with unpredictable rains, or frost, and land and labour must be fairly cheap here, too. The type of grapes also seems to be somewhat arbitrary. We met one farmer who grows grapes that he sells to Chateau Musar, the best known Lebanese wine outside Lebanon, but he has both Cabernet Sauvignon and Syrah on his field, not separated but in between each other, and I doubt anybody cares when the grapes are harvested. Perhaps this is why single cepage is rare, among the Lebanese wines. All of the wine houses also make arak, two or three times distilled from the remains of the grapes, combined with anis seeds – very similar to Greek ouzo or Turkish raki. The better variety is, in fact, made at home: many Lebanese families produce their own stock, although this does require some dedication to a complex and time consuming process.

It is time to wrap up this trip, wrap up this blog. A final Saturday afternoon, lurking on a shisha – the nargile – in one of Beirut’s beach clubs, allows some reflection. The impression from two weeks Lebanon is one of a small, complex, but rich country. Rich in history. Rich in diversity. Rich in taste: good food, good wines. But also: everything here is being done tastefully. The National Museum displays but a small part of its treasures, but displays it so well. The old souks in Byblos and Zouk Mikael have been restored, but honouring the original building style; they have been filled with tourist shops but not like the average extravagant tourist boulevard. The Jeita Grottos are a major tourist attraction, yet the lighting inside is soft, subtle, not in screaming primary colours. Even Downtown Beirut, completely destroyed during the war, has been rebuilt in style, complete with the modern-look 20th century souk: you may like or not, but it is not ugly.

Lebanon is also a very friendly country. Everybody, no matter what background, what religion, what cultural or ethnic origin, goes out of their way to be helpful, to explain about the many historical remnants, or to simply point out the road in poorly signposted areas. But perhaps that is only because we are, obviously, foreigners. I am not sure whether the various groups that make up Lebanon’s complex population mix are equally easy-going between each other; certainly, talking to various people there seems to be a lot of hard feeling, prejudice, and mutual understanding and forgiveness doesn’t score high on the list of personal treats. The Lebanese are proud people. 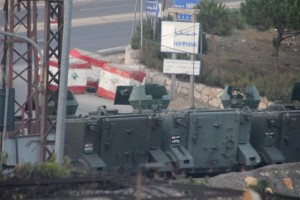 There is a lot of police and army in the streets, all armed with semi-automatic weapons, yet it doesn’t seem to bother anybody. It is not always clear why they are there, sometimes to guard strategic buildings – you don’t want to linger around at the ministry of defense in Beirut – and other times perhaps just to be there, to be visible. The Downtown Beirut area is a pleasant pedestrian area, but access is controlled by armed police at the entrance of each street leading to the Place d’Etoile. Outside the towns there are military check points as well as police check points, often heavily fortified, and well equipped. They do not necessarily interact with each other. On the main road to Beekaa we found police and army checks less than 500 meter apart, they could see each other, yet they seemed to insist on the need to control whatever passed, twice. Normally, one is not being stopped, can pass with a nod or a wave of the hand, and it seems to me, again, that this is more to demonstrate presence, and be visible, than anything else. In the Beekaa valley, and along the mountains crossings, many army check points have one or more tanks, guns pointing at each of the approaches to the junction. Even though every soldier, every police man seems to be wearing his gun, a semi-automatic, the role of the army, and its effectiveness, is somewhat uncertain. Many Lebanese will tell you that it is Hezbollah, the Shiite militant faction, that is the real military power in the country, and apparently they have demonstrated this more than once, in the past, to have government decisions overturned, or in other ways influence the democratic process. And the army is of no use, in such cases, because loyalties of army personnel are questionable, or divided, to say the least. Many, but not all, Muslim soldiers may well support Hezbollah, whilst many Christians have reasons to be either against, or pro-Hezbollah, depending on what they interpret as the biggest threat to their existence, all very confusing. If you think Christians need to establish themselves in the mix of population groups in Lebanon, you are against Hezbollaz, but if you think that the suppressive Sunni Muslim way of life is infiltrating Lebanon more and more, thanks to Saudi Arab power, then you are pro-Hezbollah. For instance. 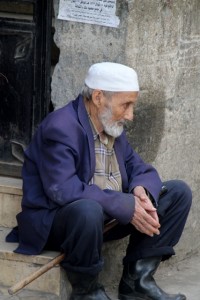 Except for the size of this country – just one third the size of The Netherlands – everything else is big here. I have never seen bigger tomatos, potatoes, basil leaves. I also imagine the size of the problems this country has, quite simply its political complexity. And that has no doubt a lot to do with the size of individual egos. If they could just treat each other like they treat the foreign visitor, this place would also have the biggest potential one can imagine!

With thanks to all the people who have been so incredibly hospitable during our trip. 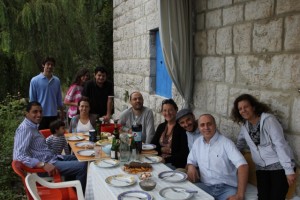 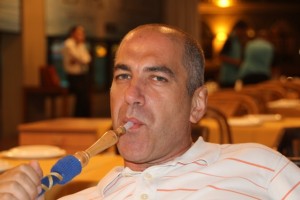