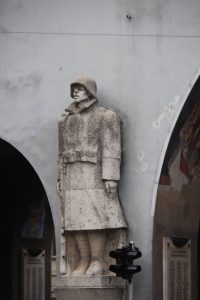 Szeged, once again, has some interesting, and less interesting, architecture, and it has the Hero’s Gate, controversial testimony to Admiral Horty.

We are back in the Great Plains, the Puszta. Segzed is all the way south, close to the Serbian border, there where the Tisza River – which we have already encountered several times, like in the Erdohat and in Tokaj – leaves the country to join up with the Danube in Serbia. 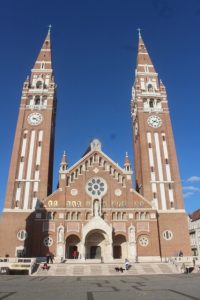 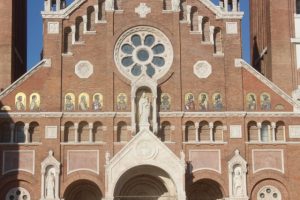 with lots of little niches, and 12 apostles on the outside 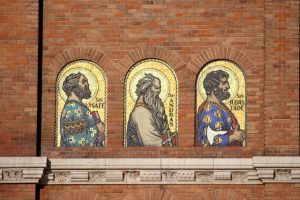 some of the apostles in mosaic 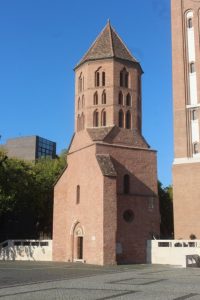 and the supposedly 11th Century Demetrius tower, of which not much seems original 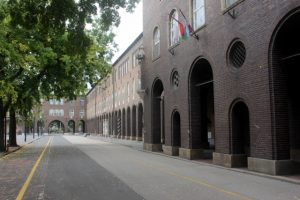 the large square in front of the church 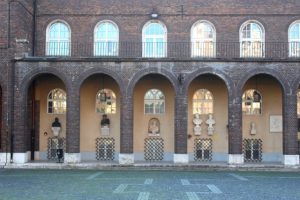 with bustes and plaques in each of the arches

Szeged has had a problem. It suffered a very bad flood, from that same Tisza, in 1879, which means that almost everything is town post-dates this. The dominant building is the Votive Church, after a pledge of the town’s citizens, after the floods, to build a cathedral. Coincidentally or not, the square in front of the church is exactly the size of the San Marcos square in Venice – even though the church is nothing like the San Marcos. But the square itself is impressive, nevertheless, lined by arched buildings belonging to the church, with busts and plagues in every arch. On the same square is also the oldest Szeged building, probably originally 11th Century: the eight-sided Demetrius tower, which obviously must have survived the floods, and was restored in 1926. 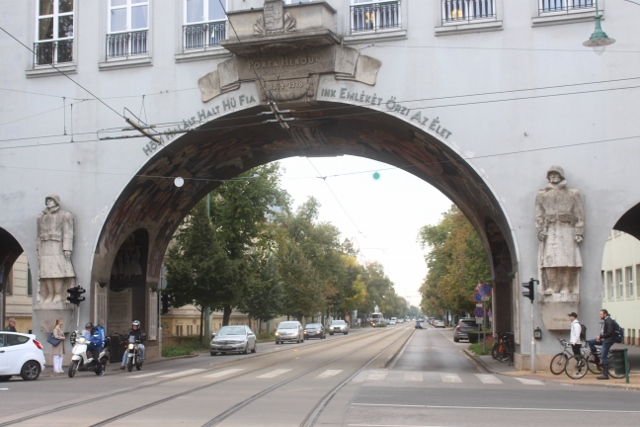 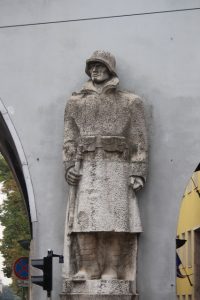 and the other soldier, also concrete 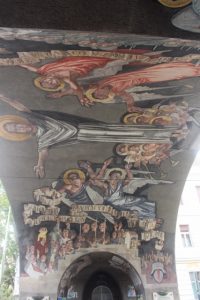 the arch on the inside has been painted 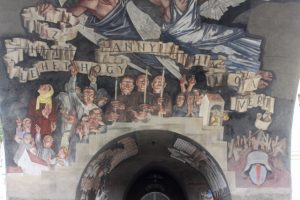 and I am not sure what it all means 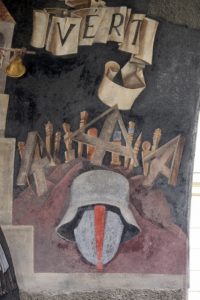 this is not the most uplifting scene, I would say 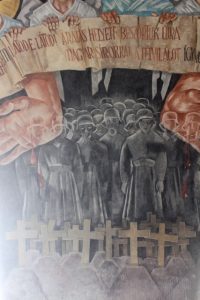 and neither is this one, more soldiers, some with gas masks

Not far from the Dom square is Hero’s Gate, a rather controversial issue. It was built to honour Admiral Horty and his fascist henchmen, who gathered in this place to take over Hungary after the early Bela Kun Communist republic was thrashed by Romanian forces, in 1919. The murals inside the gate were painted over during the post-war communist times, but recently have been restored, even including the figure of Horty himself, who remains a controversial figure in Hungary – I haven’t been able to identify him in the murals. The collection of paintings amount to a strange combination of religious and militaristic images, artistically not very good, but confrontational they are. 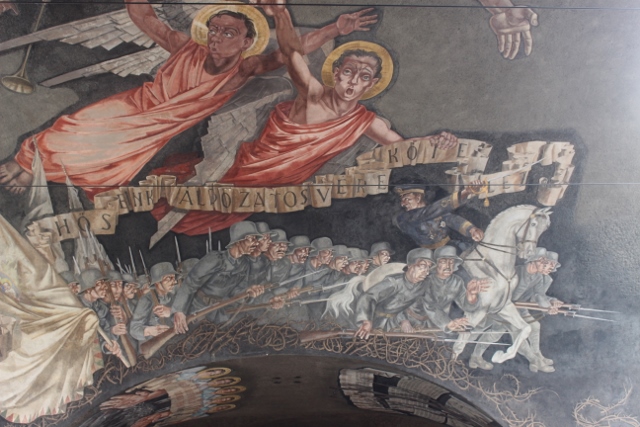 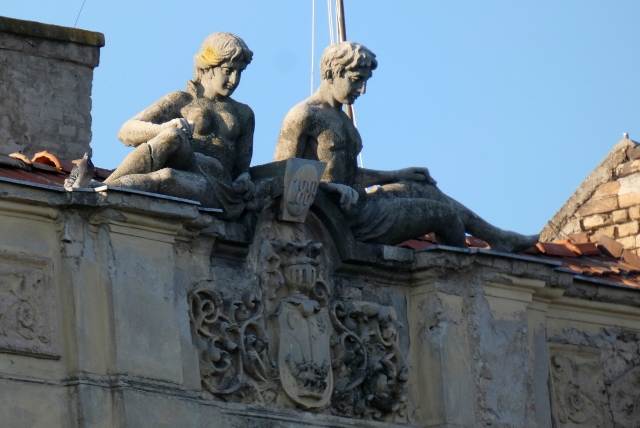 in another part of town, more sculptures, these ones peacefully observing everything below 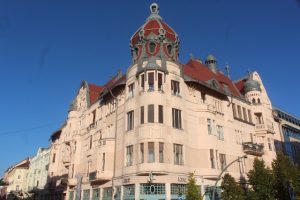 Ungar-Mayer Palota, or palace, one of the more remarkable buildings in Segzed 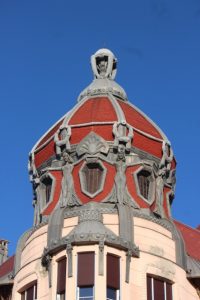 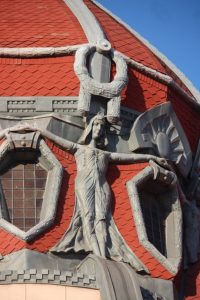 and in some more detail 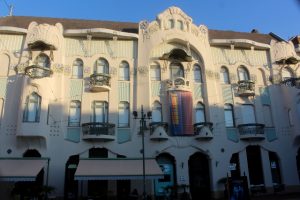 Reok Palota is in Hansl-and-Gretchen style, if that is an architectural term 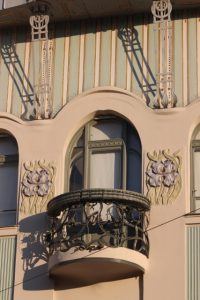 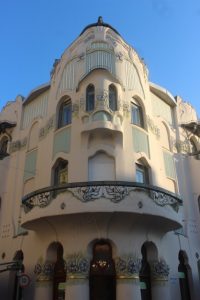 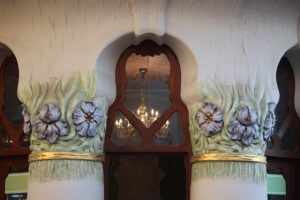 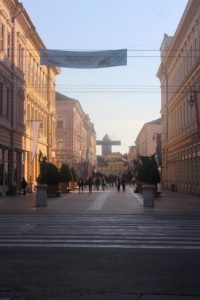 the main pedestrian street in Segzed, full of atmosphere 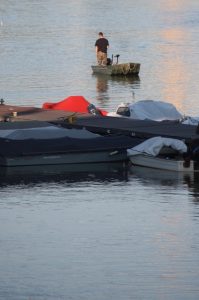 some are keeping away from it all, fishing on the Tisza River

And for the rest Szeged is like to many other Hungarian towns, a relatively small centre with a variety of architectural styles – in this case definitely all end 19th to beginning of the 20th Century. Which provides for an entertaining collection, from Hansel-and-Gretchen like Art Nouveau not dissimilar to the Cifra Place is Kecskemet, to a slightly more classical style, but invariably excessively decorated. Just the thing we like to see, like to admire – without any judgement on its artistic value.

Next: the Mohacs battle field memorial. 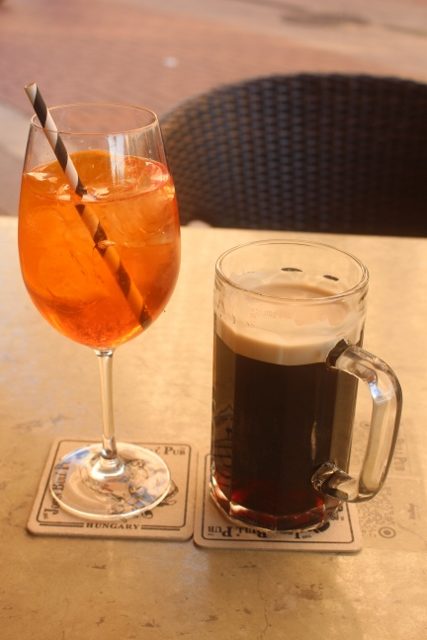 and full of inviting terraces