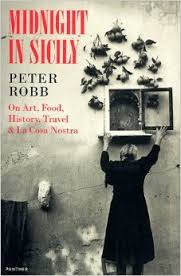 The one book about Sicily I read, during our short trip, is “Midnight in Sicily” (1996), written by Peter Robb. Although the book is advertised by its sub-title, on arts, food, history, travel & Cosa Nostra, the latter is by far the dominant subject. Robb describes, sometimes in sickening detail, how the Mafia turned itself from a group of family- and village-based criminal bands who made their money from cigarette smuggling and protection rings, loosely governed by a overarching Cupola to ensure that different gangs didn’t interfere with each other’s operation, into an efficient crime-machine intricately interwoven with Italian politics at all levels – and I mean, literally, at all levels: the book is kind of linked to the trial of seven-time prime minister Guilio Andreotti. At the same time Robb plausibly sketches the mechanism that undid the Mafia: not so much the efforts of a few determinded anti-mafia fighters, however noble and courageous their cause, but more so the rise and rise of Riina Toti, who took control of the Cupola, and systematically began to murder everybody in the organisation who could possibly challenge him, to the effect that quite a few, not sure about their lives inside the Mafia anymore, decided to get out, and break the Omerta, the code of silence, in an last attempt to survive.

Mr Robb’s book does divert, and has entertaining parts on, for instance, the history of the fork, and the origin of pasta. Mr Robb also meets interesting people, like a woman photographer turned politician, fiercely anti-Mafia. But every time, he ultimately comes back to his prime subject, the Mafia, and every time, he spells out other gruesome details – sometimes, perhaps, too much. But it doesn’t diminish the intensity of the book, and the message it puts forward, that Italy was on the brink of becoming ungovernable. Great book for anybody interested not just in Sicily, but also in the post-war history of Italy.