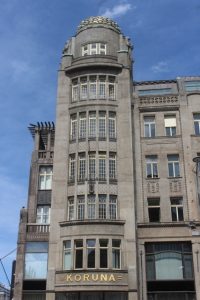 Koruna probably means Corona, but it is also the local currency

We went to the Czch Republic because of Corona, or rather, because of the resultant lack of tourists. But we hadn’t expected a total lack of Corona awareness, as well.

When we planned our summer trip, we did consider various options. We chose for the Czech Republic because it is relatively close to our home – less than a day’s drive – and we would have to deal with one Corona Covid-19 regime only. 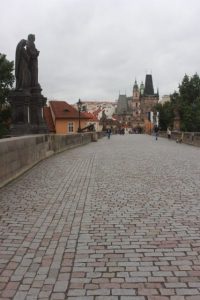 thanks to the Corona scare, no tourists – nobody at all – on the Karlov bridge, mid morning

Corona regime? There is no Corona awareness whatsoever here! In Loket, OK, a small town, people didn’t respect the social distancing, officially 2 meters in the Czech Republic. Local tourist moved in large groups, sat at the terraces and inside the restaurants, all together, no distance, no mask, no Corona scare. But surely Prague would be different? Our hotel in Prague stated that face masks were obligatory in the restaurant, but when I asked for one, they said that there was no need anymore. Hmmm. There was certainly no attempt to keep distance between tables, or at the buffet, where lots of people were trying to get to their favourites at the same time. Tables were really close together, queues for the coffee machine tight. And no mask in sights. 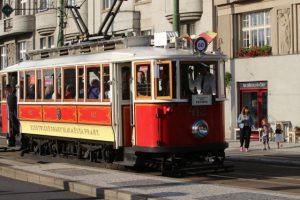 not a lot of Crona awareness in this historical tram car

Everywhere else was no different, restaurant tables were packed, no attempt was made to establish a one-way system at the sights – you worm your way into the ticket office at the Prague Castle, whilst lots of others try to push in front, then finally get your ticket and you need to exit the same way, literally pushing yourself past the queue. You visit another tourist site, a church for example, and more often than not you leave through the same door as you came in, even though there are plenty other possibilities if you want to manage the flow of people. In lots of places, the sights, the hotels and the restaurants, there are disinfectants, either prominently displayed or as a forgotten afterthought somewhere in a corner; they are not really being used. 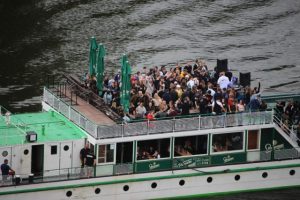 and definitely no Corona awareness on this river cruise party

Well, except in the metro, where a face mask is compulsory; and people wear it, but they don’t really know why. In the Czech Republic, if it is the law, you obey. But for all intents and purposes, there is no Corona awareness in this country, and with 350 Corona victims on a little over 10 million inhabitants, which is very few indeed, it doesn’t play a role in the lives of people. Simple.

The only Koruna people really find important, is their local currency.

next: Pisek and Prachatice

2 Responses to 05. the Corona regime