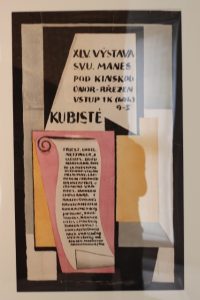 A poster promoting Cubism, in the Czech Cubist Museum of Prague

One of the surprises of this trip is the discovery of the Czech Cubism movement, which is spectacularly on view not only in various Prague museums, but also in some of the architecture.

I had never heard about Cubism in the Czech Republic. And what do I know about Cubism, anyhow, other than that a few famous painters like Picasso, Braque and Juan Gris experimented with the style at the beginning of the 20th Century. Only for it to die out again after WW I. 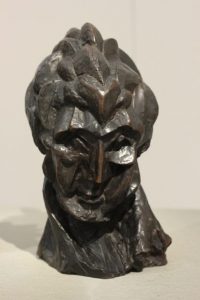 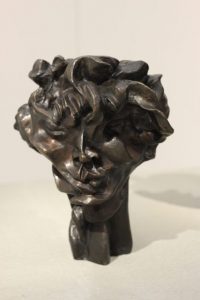 And one from Czech Cubist sculpturer Otto Gutfreund, called “Viki’s Head”, from 1911. Similarities?

But the Czech took Cubism much more seriously. Several painters, some of whom had been to Paris to study together with the big guys, established their own Avant-garde movement, called Skupina, in 1911. To be honest, much of their work – by Emil Filla, Joseph Capek and the helpfully named Bohumil Kubista – echoes that of the better-known proponents of the style, and I am not sure how much originality there is in their work. But they were soon joined by others, designers and architects, who tried to extend the principles of Cubism to applied arts. Not easy, of course, because where in painting one can easily defend the autonomy of form, and art for the sake of art, buildings and furniture – the terrain of architects and designers – still need to fulfil a certain functional role, as well. The objective of the Cubist architect, so was explained to me, was to “to supplant the right-angled forms of modernism with oblique, broken, pyramidal ones; they desired to give shape to the boxlike, modernist interiors through the use of forms reminiscent of the inside of a crystal”. 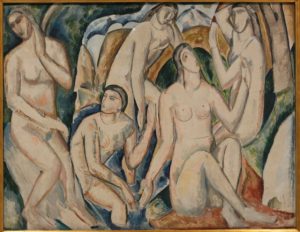 A painting by French artist Andre Derain, named “Bathers”, from 1908 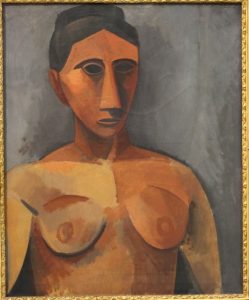 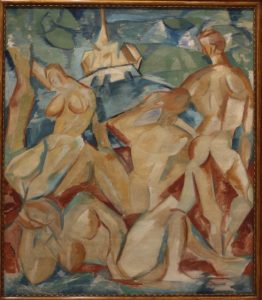 Emil Filla, one of the main Cubism proponents in the Czech Republic, painted “Morning” in 1911. Similarities? 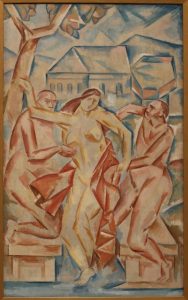 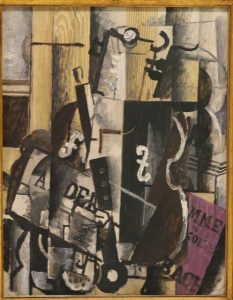 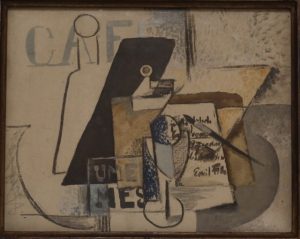 and Emil Filla’s “Still Life with Art Monthly” in 1914. It is a well-know theme, afterall.

The First World War interrupted the cross fertilisation between the various European art centres. Afterwards, in an independent Czechoslovakia, local Cubism developed into its own variety, called Rondo-cubism, a “national” style in which the broken and crystal-like ornamentation was replaced with colourful circles and arcs (source: http://www.nck.cz/cesky_kubismus – the site doesn’t seem to work anymore). (The architecture in Hradek Karlova, later in this trip, is perhaps the best example of this development.) In the end this country is blessed with a whole collection of unique Cubist architecture, Rondo or otherwise. Quite special! 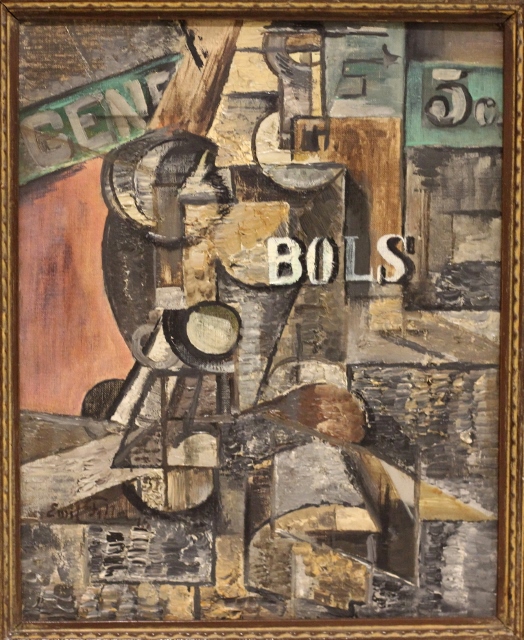 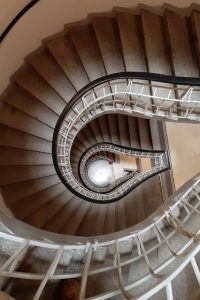 the staits inside the museum (courtesy Sofia) 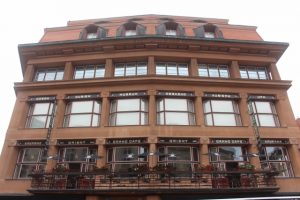 “the House of the Black Madonna”, Cubist architecture of Josef Gocar, which is now the Czech Cubism Museum

The traces of Cubism in Prague 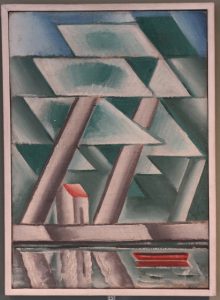 The best introduction to Czech Cubism is the museum in the old town of Prague, itself housed in a wonderful building with Cubist characteristics outside and in. Two floors are dedicated to a collection of tables, chairs and cupboards, and a whole range of other designer objects, like glass work and ceramics, with some paintings and posters thrown in for good measure – all from artists committed to Cubism. An absolutely fabulous collection! 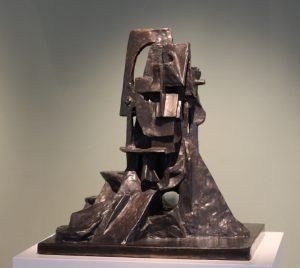 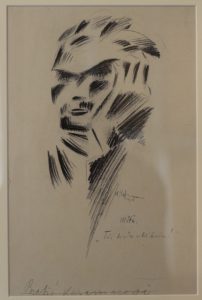 a pencil drawing by Vlastislaf Hofmann called “Portrait of Mitya”, as an illustration in Dostoyevsky’ The Brothers Karamazov, in 1916 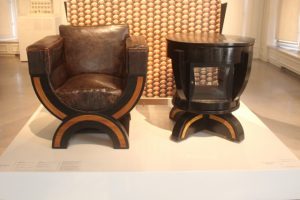 an upholstered arm chair and liquor table (I forgot to note down the artist’s name) in stained oak, part of a Rondo-Cubist set of furniture 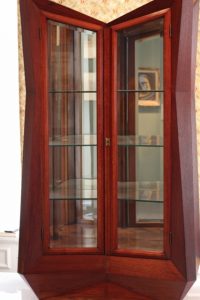 a glass cabinet, of wood and glass, equally unknown artist (for the same reason), but note Capek’s painting in the mirror 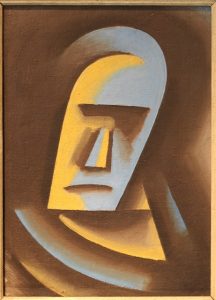 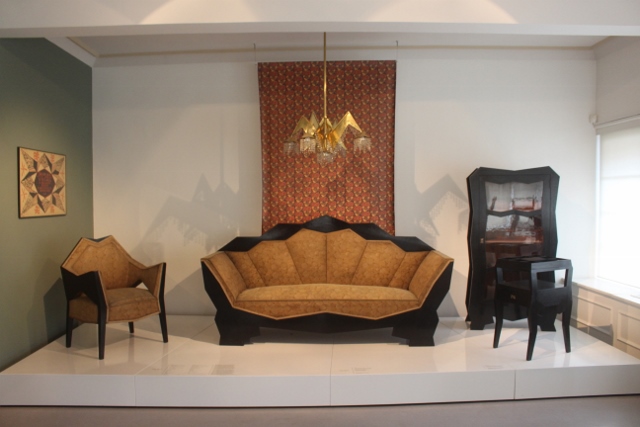 a set of furniture (1913) by Josef Gocar, the architect who also designed the building 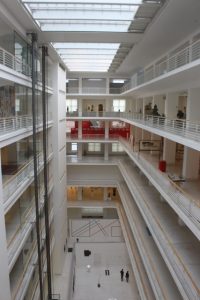 Which prompted us to see more and move on to the Veletrzni Palac, a huge Trade Fair Hall, which houses the Narodni Gallery, a 19th and 20th Century Czech and international art museum. This contains – amongst other works – further paintings and sculptures of the Cubist adherents of the early 20th Century. Some Picasso and Braque, but many more Filla, Capek and Kubista. And in the process, we admired a lot more of Czech 20th Century painting, of which quite a lot was quite accomplished – a real nice, if unexpected, experience. 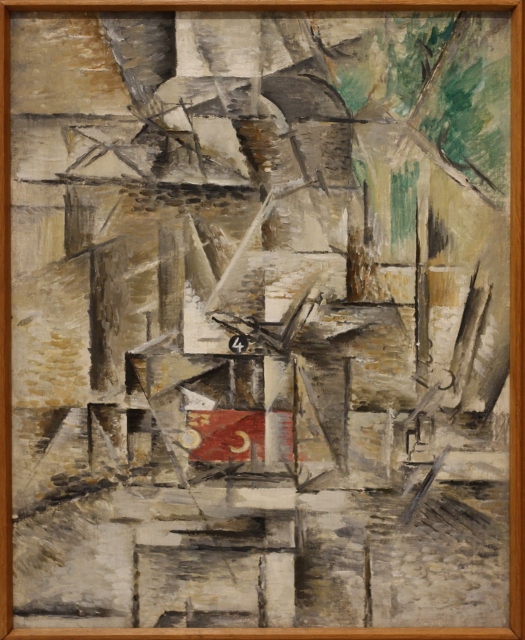 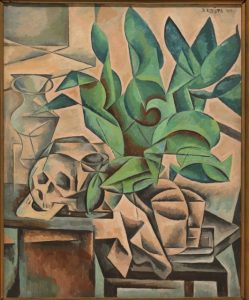 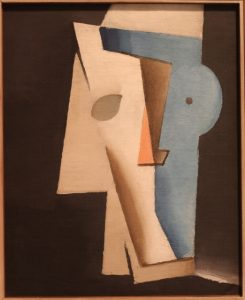 Josef Capek “Head” (1914-15) – super-Cubist in that the subject matter is being depicted from different sides, without perspective 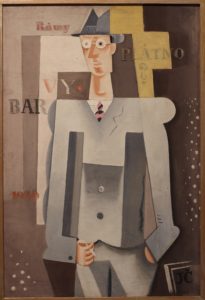 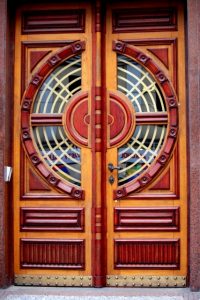 the door of the Palac Archa, a cubist building in the old town of Prague

Of course, architecture is more difficult to capture in a museum. The Cubist buildings are distributed all of Prague, but the densest collection is in the Vysehrad area, where no less than four striking Cubist structures have been preserved, from mansions to apartment buildings. Some are crumbling away, sadly, and are marked by graffiti, but others look well-maintained, and will hopefully remain as examples of this fabulous expression of applied arts.

next: Pisek and Prachatice 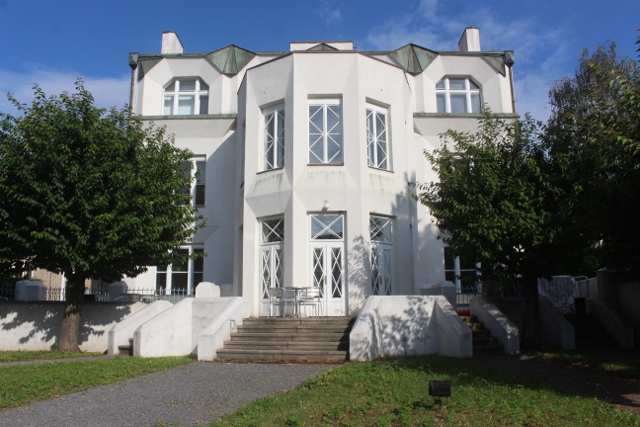 a Cubist villa, in the Vysehrad neighbourhood 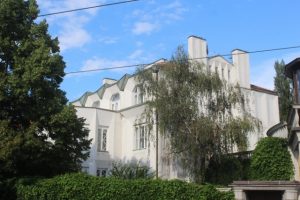 same villa, from a different angle 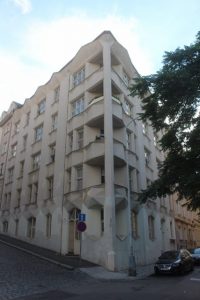 a Cubist apartment building, also in the Vysehrad neighbourhood 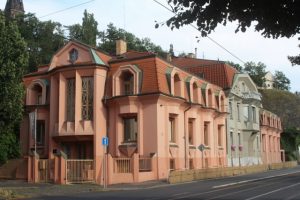 and a row of houses, also Cubist design, along the river in the Vysehrad area