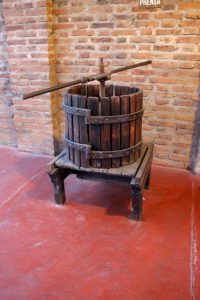 not all of the old equipment is still being used at Bodega Viarago, in the Sierras

Unexpectedly, we find a number of young wineries in the Sierras de Cordoba, although many of them may still have some way to go to maturity; enthusiasm compensates.

Over the past decades Argentine wine has built up an enviable reputation – although a certain amount of personal bias may well be influencing this statement somewhat. Where in the past quantity was the norm, wineries started to focus on quality, perhaps some 20 years ago, and the results are impressive. more and more individual producers, ever increasing varieties, and especially, better and better wines. All from the foothills of the Andes, mostly Mendoza and San Juan. Or so I thought.

Which is why we were not a little surprised to find several bodegas – which is how the wineries are called locally – in the Sierras de Cordoba, close to Villa de Las Rosas, where we spent a few days. Obviously, this had to be explored. So off to San Javier, where according to a magazine article there are four of five of them. 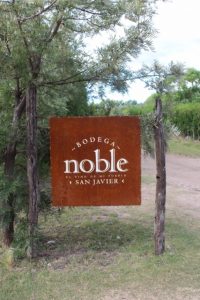 by accident we stumble on Bodega Noble 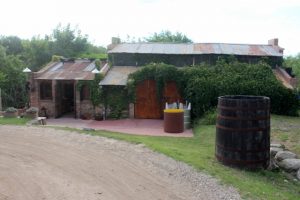 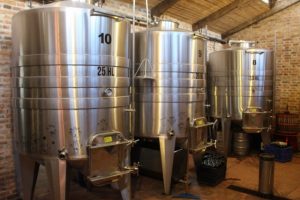 Talking to several of the bodega owners, it becomes clear that the wineries here are mostly focused on ‘enoturismo’, wine tourism. Hmmm. There is some room for improvement here. The first winery we wanted to visit in San Javier we fail to find. Even the local tourist information lady doesn’t know about it. By chance we stumble onto another one, Noble, not even mentioned in the article. Which turns out to be a really nice little bodega, run by a guy called Nicolas. On some three hectares of land they produce merlot, cabernet sauvignon and that quintessential Argentinian grape, Malbec, together good for approximately 16,000 bottles a year. Nicolas tells enthusiastically about the process, and about the various treatments that deliver different wines, from simple ones matured in stainless steel tanks to the more complex ones that have been kept in oak barrels for up to 48 months. Asked about markets, he explains that, indeed, most of his sales are to tourists, and some go to local restaurants. But how he convinces the tourists to buy remains unclear: tasting is not really part of the process, and only after we ask, he serves a tiny little bit of Malbec, the last bit of a bottle that happened to be open. We buy a bottle, anyhow, to try later. 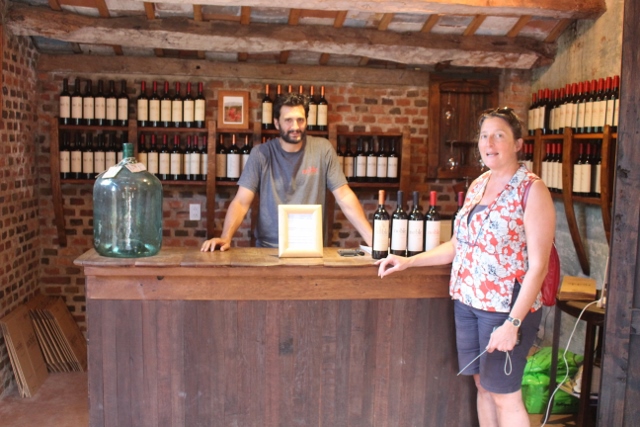 and Nicolas explaining – but no tasting glasses…. 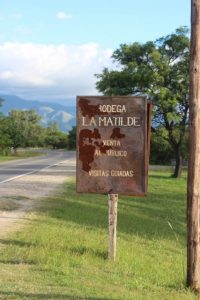 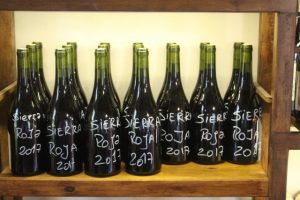 the labels of recently bottled wine weren’t reasy yet

Our hopes are on La Matilde, another bodega outside San Javier. But this turns out to be a shop, only, where they sell wine, and a lot of other local products, like hand-painted bowls and other artefacts. Many of the bottles in the shop have the contents and the year hand-written on them. It transpires that they haven’t got the labels ready yet, for wine that has been bottled only a few weeks ago. Which doesn’t make the bottles any more attractive. Here, too, it remains unclear how they convince buyers: yes, we get to taste two of the wines they produce, but the cheapest is close to 10 US$, and their top-level wine costs some 25 US$. In a country where wines start under 2.5 US$, where a perfectly acceptable wine is around 5-6 US$, and where even the best Mendoza wines don’t sell for more than 25 US$. And those are really nice, whilst La Mathilde’s tasted a little rough, to say the least. We don’t buy any. You must be joking! 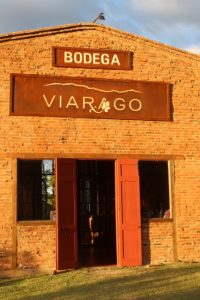 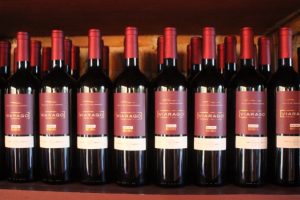 and did get the labels in time 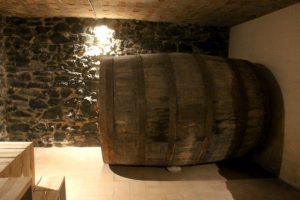 a barrel in the show cellar 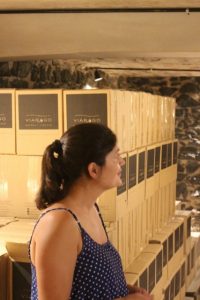 The apparently most successful bodega, Las Breas, the only one that has managed to get its wines in the local supermarkets, unfortunately is closed on Saturday afternoon, and on Sunday’s, too. Wine tourism, anybody? But nearer to Villa de Las Rosas, Bodega Viarago is still open. And this is where we learn most about the history of Cordoba wines, from the very enthusiastic Pamela. The first production dated from the 18th Century, not surprisingly introduced by the Jesuits who established themselves in the area. After their expulsion, the wine remained, until the government wine authority banned the production in Cordoba in the 1970s, allegedly because in this warm climate the wines were matured underground in cellars, which was considered unhealthy. A prohibitive tax regime helped to kill off the last wineries some time later – so that the Mendoza area could conveniently become even more dominant then it already was. Only in 2001 wineries opened again, after one of the worst economic crises in Argentine history, a time in which many people lost their jobs, and left the expensive area of Buenos Aires for the cheaper living conditions in the Sierras de Cordoba. This is when Noble started, and many of the other bodegas, all small-scale operations. Viarago still had access to the old equipment of grand-dad, who came from Italy after the 2nd World War, and to the house and the cellars of the original winery he established, from before the 1970s closure. Pamela takes us to the cellars, now nicely remodelled. And she makes us taste two of the wines, as well, a Malbec and a blend, both really nice wines, and both far more realistically priced than our earlier experience. This is what wine tourism needs to be, an enthusiastically told story accompanied by good, affordable wines. Pity we have several months of travel ahead of us, and then a flight home. Otherwise we would certainly have added to our own cellar.

next: that other wine area, Mendoza

2 Responses to 07. the wineries