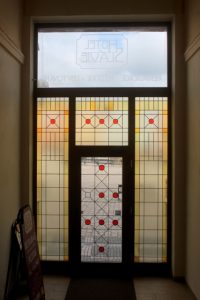 A travel day, ever further east, brings us to the rural village of Holasovice and to Trebon, with its carp lakes, before ending up in Pelrhimov. A bit heavy on architecture, I am afraid.

We decide to leave Prachatice early. It is a nice enough little town, and served us well as a base for the Sumava region and for Cesky Krumlov, but three nights had exhausted the town’s dining opportunities – which weren’t that fabulous, none of them. Time to move east and explore more of South Bohemia. 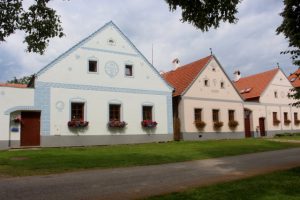 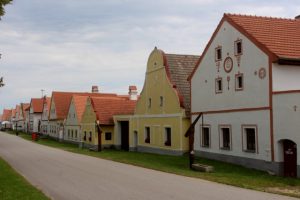 another row of impeccable farm houses

The small village of Holasovice is exploiting its UNESCO status to the full.

There are lots of medieval towns with castles and palaces, cobble stones and pastel-coloured decorated town houses around. So when we read about Holasovice, reputedly a small village with old, original farms, of some 150 years ago, we jumped on the opportunity for some variation. And indeed, Holasovice, another UNESCO-protected World Heritage site, sports a large grassy square surrounded by old farm houses,  but all of those are neatly and newly painted, and as far as I am concerned clearly too touristic for their own good. The parking outside the village only accepts payment for a minimum of three hours, yet in 15 minutes you have walked three times around the entire village. Hmmm. 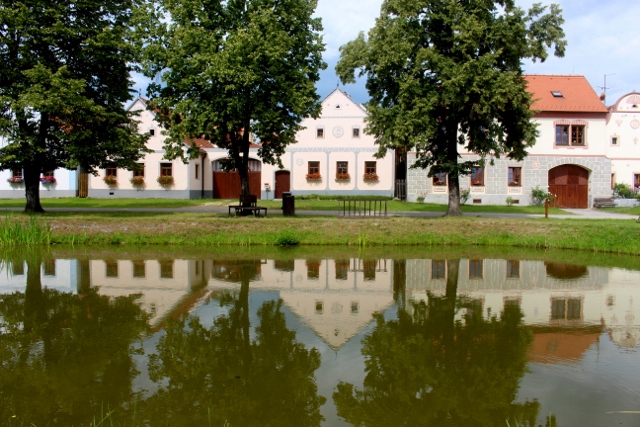 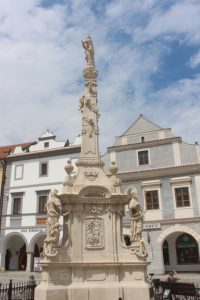 pest column, celebrating the end of the plague, in the centre of Trebon 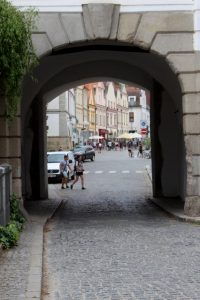 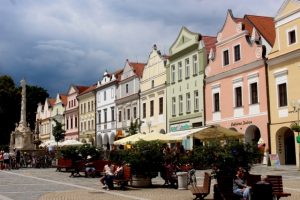 the main square of Trebon fitting for cyclists of all ages 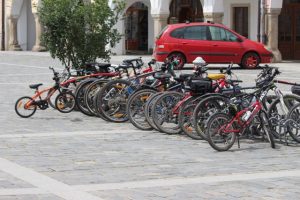 bicycles parked in the square 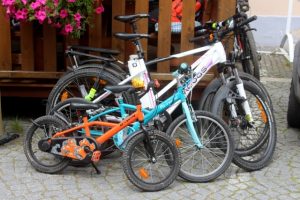 bicycles of all sizes

Trebon is another lovely medieval town, but also sports the biggest carp culture in the area, if not in entire Europe.

Trebon, on the other hand, is a more substantial town again. Unlike many others, it still has several gates to the old town, which consists mainly of a large elongated square, a few colourful streets around the back, and the obligatory palace. For a reason unknown to us, Trebon is also the centre of Czech cycling holidays, or so it looks. Czechs go cycling with the entire family, no matter how small the kids are, so there are many small bicycles, too, or a small bike tied to a big one. The lovely large square is full of them, and of cyclists, either resting from past efforts, or wiggling their way annoyingly through the other half of the tourists, those who do not have a bicycle. 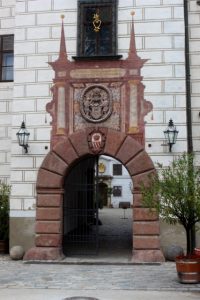 one of the entrances to the palace 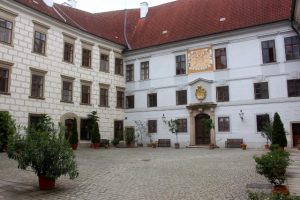 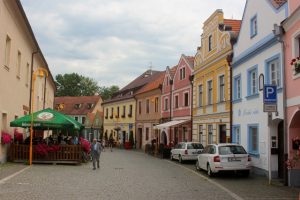 back street in Trebon, as colourful as the main square 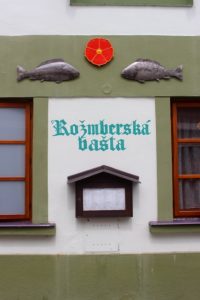 We lunch on carp in Trebon. In reality, they have lots of other fresh water fish, as well, but carp is something special here. The area around Trebon needed economic activity in the 15th and 16th Century, so the local lords at the time – Rosenberg, again – decided to build fish ponds. Well, not they, but the villagers were to do the construction, of course, as well as digging the 45 km canal that supplied the water, from the Luznice river. Apparently, there are over 6000 ponds, big and small, all connected. Which comes in handy at Christmas, because the entire Czech Republic eats carp with Christmas – the story doesn’t say whether this is a habit that developed before or after the digging of these ponds.

Of course we have to see the ponds for ourselves, too. We went to look for the Rozmberg pond, one of the largest in the area. What we hadn’t anticipated was that in such low-lying, water-rich areas, mosquitos have a field day – we had lots of company during our half hour walk towards the water. And all together the whole scenery wasn’t, in fact, that special. 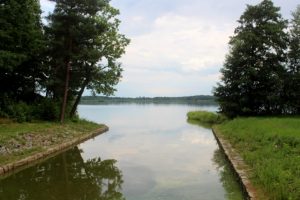 the Rozmberg carp pond, one of the biggest around Trebon 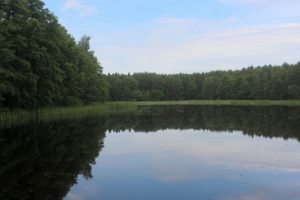 and one of the other ponds, not a breath of air 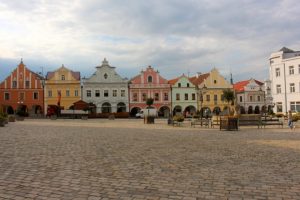 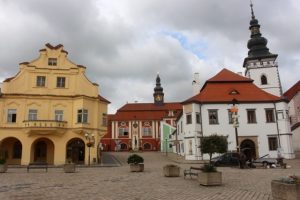 the church, and one of the Cubist houses, along the square

Lovely Pelmirhov does not only have another beautiful square, it also has a few early 20th C Cubist houses, which makes for a nice diversification.

So we moved on the Pelrhimov, where we had booked a hotel for the night. Because Pelrhimov is another one of those lovely medieval towns, with cobble stone streets, large squares with pastel-coloured houses and a castle or palace. I may sound a little cynical, because indeed there are so many little medieval towns in Czech Republic, but Pelrhimov is actually very nice. And what is more, it offers architectural diversification, because it also supports a few Cubist houses, one along the square and another in a street not far away. I keep on finding these fascinating. Oh, and our hotel, Hotel Slavie, is described as “from the Secessionist-era” – which is also around the time Cubism flourished in this country.

next: we move to Moravia, to the towns of Telc and Slavonice. 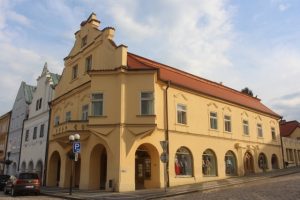 close-up of the yellow Cubist house 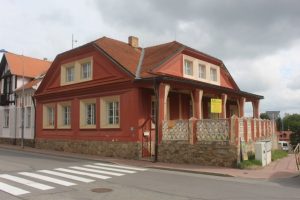 and another one, red-coloured, outside the centre 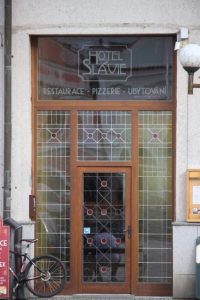 the entrance of the Slavie hotel 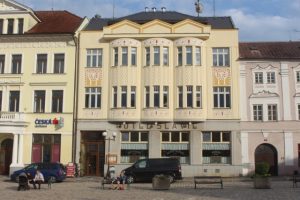 the Slavie hotel in its full glory

and the biggest part of the square