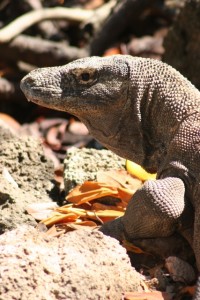 Komodo NP is home to the fabulously prehistoric-looking Komodo Dragons, huge monitor lizards of which the males can get up to three meters long. These are viscous animals with the capacity to bite anything in their vicinity; by doing so, they also cause some nasty infection that slowly, and painfully, kills you if untreated. However, most of them are fairly docile during the day, which is mostly spent sunbathing – these are cold-blooded animals -, and it is usually only the young that display any activity. To be clear, they are ugly animals, moving awkwardly, but absolutely unique! 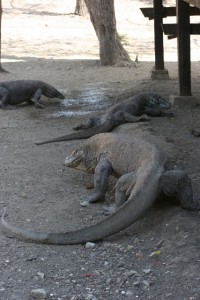 The kitchen area on Rinca, most popular with Komodo dragons Komodo dragon lazily blocking the path – you wouldn’t want to step on it! 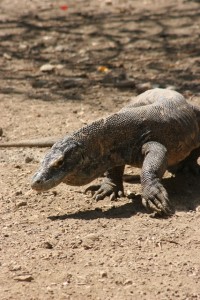 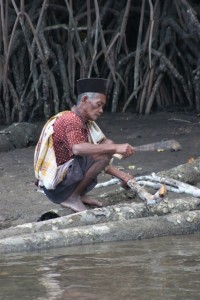 Man at work in Rinca

The park consists of two islands, Rinca and Komodo. Rinca, the smaller of the two, is closest to Labuanbaju  – the fishing village on the main island of Flores which serves as base -, and easily accessible by boat. In the past visitors would take whole goats to the island, to feed the dragons, but this is now being discouraged, as it makes the animals dependent on food hand-outs. Right! The highest density of dragons is around the park ranger’s kitchen, for obvious reasons! Rinca, view from the island

There is not much else to do on the island, a walk around is pleasant enough, but wild life, apart from the dragons, is thin and not very interesting, and for scenery there are much better places in Indonesia, and on nearby Flores. However, the opportunity to snorkel around one of the smaller islands on the way from, or to, Labuanbaju should not be missed.