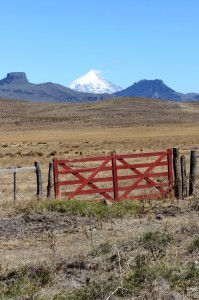 Lanin from the north side  Details

One of Argentina’s nicest National Parks supports a strato-volcano, Lanin, amidst a host of lakes.

There is a lot of natural beauty in Argentina, especially towards the Cordillera, the Andes Mountains (there is also a lot of uninspiring, monotonous country side, predominantly outside the Cordillera in the pampas). Quite a lot of this is being protected through National Parks, and much of it is being exploited by the tourist industry, not always displaying good taste. Thankfully, a thin population density and Argentina’s distance to the rest of the world, which limits the number of foreign tourists, make that there is relatively little pressure on the natural environment, and this is unlikely to change soon. 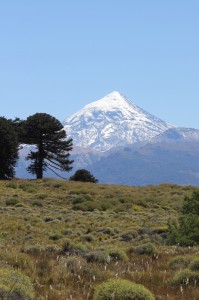 Lanin volcano from 50 kms away  Details 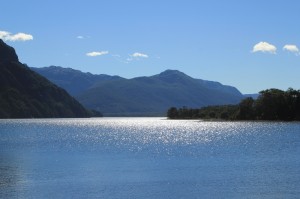 Lake Huechulafquen, the largest lake in the park  Details

One could do worse than visiting the Lanin National Park, centered around the volcano of the same name. A towering mountain of 3775 m high, snow-capped even at the end of the summer, on a clear day Lanin is visible from well over 50 kms away. We had a clear day, and the approach was awesome. 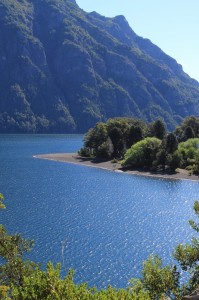 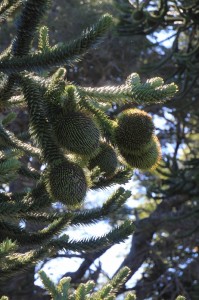 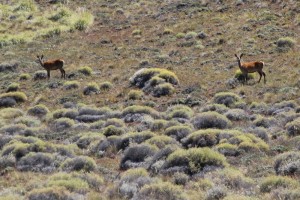 huemules, a kind of big-eared deer

The park itself stretches well beyond the volcano, and contains several lakes, indigenous Mapuche communities and tourist facilities. Yet boating, horse riding and hiking entrepreneurs, as well as hotels and campings, have hidden their business away from the road, blending in without disturbing the natural landscape: an example of tasteful tourism management that is not necessarily being followed everywhere in Argentina. Which makes the black sand beaches along the lakes, and the forests of impressive Araucaria trees, a pine sort, all the more attractive. 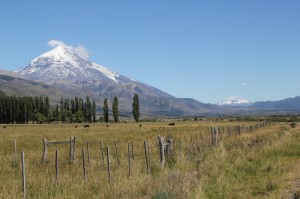 Lanin, and Quetrupilan in the distance 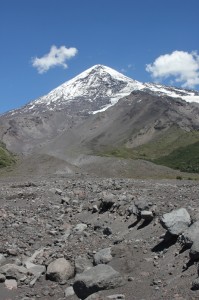 at the base of the volcano 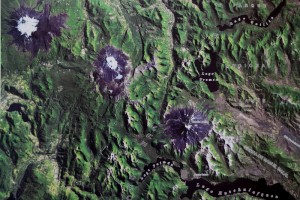 satellite image of the three volcanos, lined up (Lanin to the right, Quetrupilan in the middle, Villarica to the left)

Climbing the volcano is possible; most people do so from the north-side, over a period of one or more days. Because of the ice, specialist equipment is necessary to reach the top. We just did an easy stroll to the base of the mountain, which already provided good views over the surrounding landscape, including the next volcano, the much lower but equally snow-covered Quetrupilan in Chili (the third in a row, Villarica, also in Chili, was not visible).