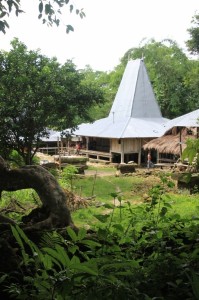 Kampung Segarum and Kampung Praikjowa are somewhat less attractive, but not less authentic, than the thatched roof kampungs of other hamlets

Kampung Segarum (?) and Kampung Praikjowa (?) – not sure about the exact spelling of the names – are close together, and both somewhat less attractive, and thus also less touristic: no visitor books are produced here. Yet, this goes to show that people are really living like this, everywhere around Waikabubak.

First is Kampung Praikjowa, at a junction immediately to the right. It has one traditional house with thatched roof, all the way to the right, and further a tomb-filled village square reached through the roots of a tree. The square is surrounded mostly by traditional houses, but here with corrugated tin roofs. As elsewhere, the houses are equally decorated with buffalo skulls and horns. 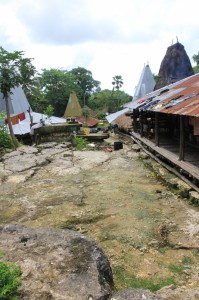 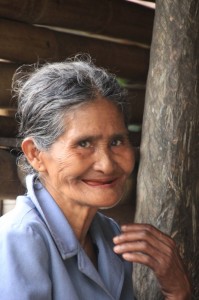 one of the women of Kampung Segarum

Kampung Segarum, at the junction to the left and to the right of the path, up the slope, is a mixture of tin-roofed and thatched-roofed traditional houses, once again surrounding some enormous tombs. At one end the tarmac road ends just below the walled compound – walled being a big word for the low stone wall that surrounds many kampungs, at the other end a steep path, part stairs part slippery stone, leads back to the road. Once again, very friendly people, and conversation is somewhat eased by Linu, who does speak a bit of English.

The last kampung covered on this virtual tour is Kampung Bondomarotto 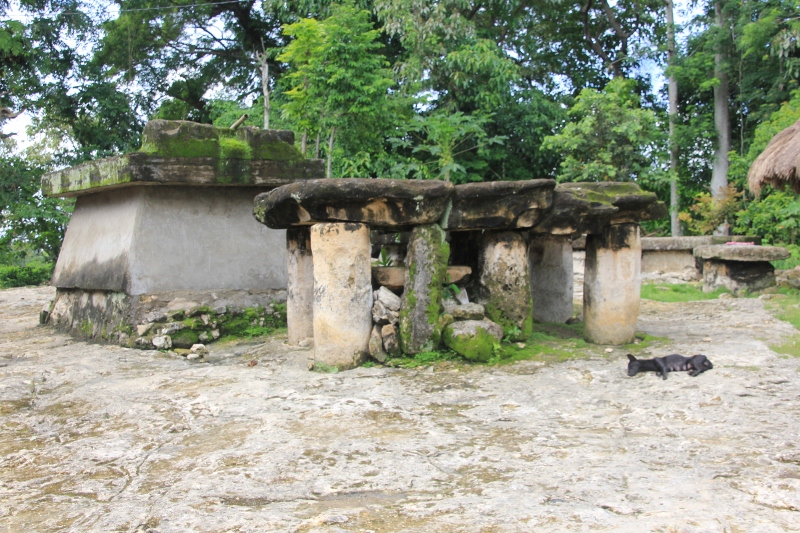