Mexico, the City Around the Capital 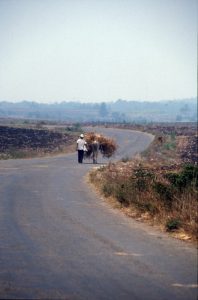 traffic on the Mexican roads

Driving in Mexico is not without challenges.

The next day we rent a car, and we leave town, first in northerly direction. Now driving in Mexico is a challenge, on more than one front. Firstly, there are the Mexican drivers, some of them driving very fast, most of them seeing nothing wrong with overtaking in the right hand lane, and all of them respecting the unwritten rule that the larger the car or truck, the more right of way. We have rented the smallest possible car. Secondly, each crossing is referred to as ‘entronce peligrosa’, each bend as ‘curva peligrosa’, no matter what type of crossing or bend, so these warnings soon loose their significance – until there is a real sharp hairpin, warned for in exactly the same manner. That the roads are dangerous may be clear from the many crosses along them. 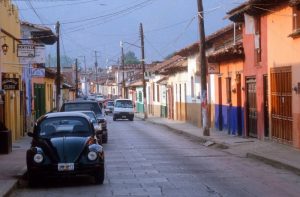 Then there are the topes, speed ramps that the Mexicans have placed in multiples at each and every village, at each school, junction, or just to annoy automobilists. Topes come in a variety of forms, but almost always they require you to come to a virtual stop, before inching your car over a significant and steep ramp. This often includes scraping the bottom plate. Often, but not always, they are announced by signs, and sometimes, but not always, they are painted yellow or while, or striped, to make them better visible. After weeks of driving we had defined real topes, inverted topes (drainage grooves in the road), irregular inverted topes (potholes), pseudo topes (those that were announced, and even painted on the road, but ultimately without any elevation, and fool’s topes (that are announced by signs, so that you lower speed, but ultimately never materialise). Very confusing, and invariably very annoying. 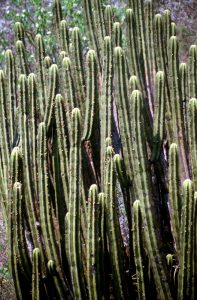 cacti galore along the Mexican roads 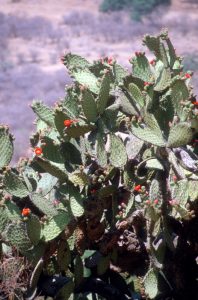 And then there are the road signs, or rather, the lack of them. Occasionally, a town you are heading for will be sign posted, a few times, or just once, but at the next intersection or motorway exit all reference to this town will have evaporated. We foreigners are not the only ones struggling with that; every Mexican crossing has, a few hundred meters further on, a ‘retorno’, where you can U-turn after you have realised that you missed the turn. One way of realising is looking back, after the junction: sometimes the indications are only posted on one side of the crossing, appearing in your rearview mirror after you passed… It does not help that many signs are behind trees, or behind trucks that always seem to drive next to you or in front of you. Anyhow, even if the sign is visible, they are usually made unreadable by graffiti, with the exception of those stating ‘No maltrata los senalos’. Asking the way is another challenge, the Mexicans must predominantly originate from Andalusian immigrants. They will invariably tell you ‘derecho, derecho’ (straight ahead), only for you to come to a T-junction two minutes later.

Another favourable sign along the road is ‘No tire basura’ (don’t throw rubbish): the one thing uniting all Mexican roads is the enormous amount of rubbish along each and every one of them. Plastic bottles and cans, paper, bags, anything, and these are just thrown out of the open window. Other places seem to have been used deliberately to dump some bags of household rubbish, the bags cut open in the mean time, and dirty nappies by now having blown all over the place. And it stinks!, often enhanced by the many dead animals that appear along the roads, mainly dogs, but sometimes including sheep, goats and the occasional cow. Not surprising, as cattle roam freely along the roads, including motorways. So no picnics for us, even stopping to take photo’s is often unpleasant because of the stench.

Anyhow, on our first day driving, after much frustration and many extra kilometers and back, we reach our first destination outside Mexico DF, the pre-columbian ruins of Teotihuacan. 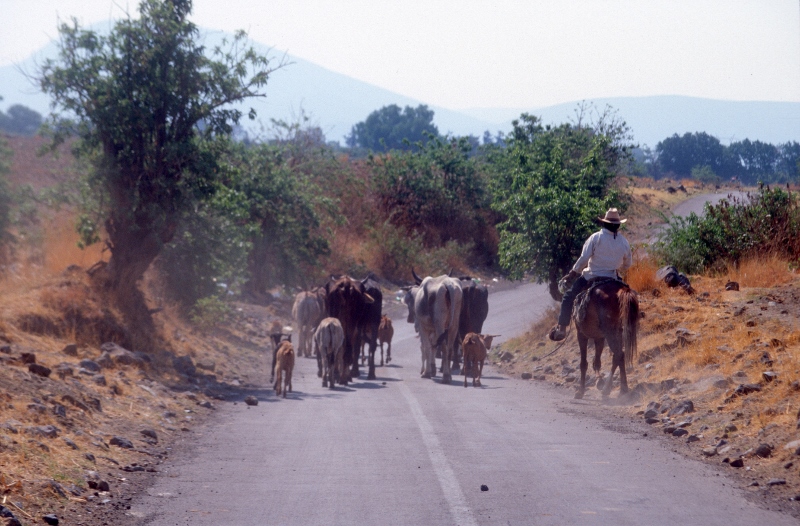