the Mexican Driving Experience To Oaxaca 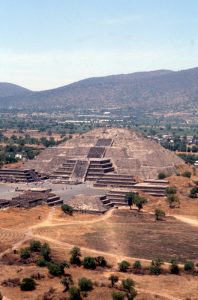 view of one of the pyramids in Teotihuacan, an archeaological site not far from Mexico City

There are lots of attractive sites, from various periods of Mexico’s history not too far away from the capital, from pre-Aztec pyramids to Spanish colonial towns with a wealth of churches and convents.

Ruins come in different forms in Mexico. Many of the less important ones are only partly restored, or restored but not vigorously protected, allowing you to wander around freely and explore. Obviously, experience has taught the Mexicans that the public is not to be trusted – and we have seen plenty signs of that ourselves -, so the better-known, more famous sites are carefully controlled and fenced off, with walking paths clearly marked and signposted, and rope preventing you from going astray. Which undermines the Indiana Jones experience somewhat, reduces it to a walk in the park. 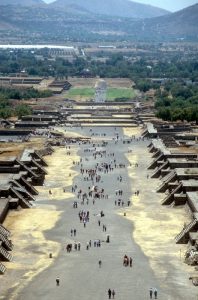 people in the Calle de los Muertos, the street of the dead, in Teotihuacan

Teotihuacan is one of the most famous sites: thus, a walk in the park. The site is not only pre-columbian but even pre-Aztec: when the Aztecs arrived here at the end of the 12th C they found the place already in ruins.  The complex is certainly very impressive with huge pyramids and a multitude of temples, many parts of which have been being fenced off, but our first impression is that of a somewhat artificially restored place. Being the first one we visited, I am now not sure anymore how this relates to many of the other sites. The pyramids, the one of the Sun and, indeed, the one of the Moon, can be climbed: pretty steep climbs, but the views from the top are worth it. What they don’t tell you is the amount of vendors that litter the site, hundreds of people are trying to sell you from black onyx masks to bows and arrows to typical blankets and dresses, as if anybody would want to buy this during a visit. Well, evidently, some people do. The worst are the whistles, especially as the vendors feel they have to demonstrate them continuously. 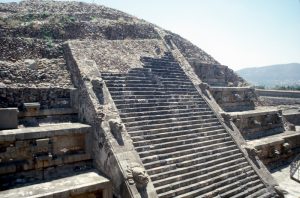 one of the lesser pyramids in Teotihuacan 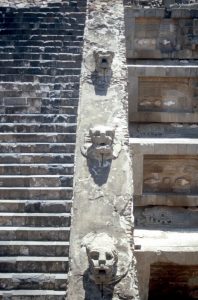 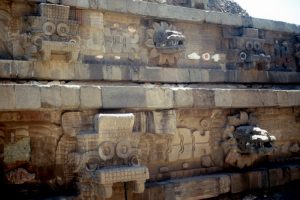 and further decorations of the temples in Teotihuacan 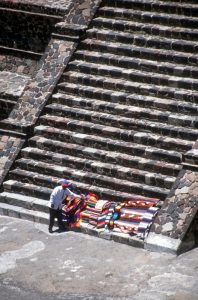 a vendor in the complex, with colourful – and no doubt utterly traditional – blankets the huge Pyramid of the Sun (or Moon, not sure) in Teotihuacan 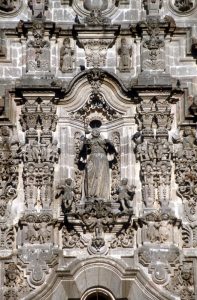 but with plenty of detail to marvel at on the outside 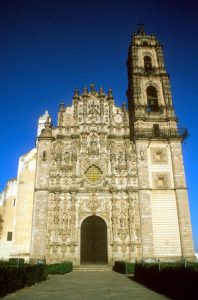 the church in Tepotzotlan, already closed

Our next stop is Tepotzotlan, a small town north of “De-effe”, as Mexico City is referred to. However, due to further driving challenges we arrive too late to see the highlight of town, as the church had already closed. We just admire the front, in the late sunlight, which was spectacular in itself. In fact, we are so late that all restaurants have already closed, at 7.30 pm (I told you they don’t work long hours here!), so we dine on take-away chicken washed away with copious amounts of Tequilla, in our hotel. The hotel is something special anyhow: our room has purple walls and a soft-green ceiling with stars and flowers, a huge bed and a Jacuzzi. I am not sure whether we were indeed supposed to stay the whole night. 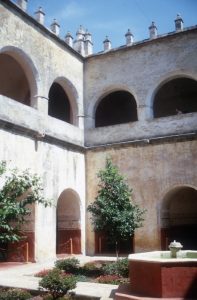 the local Convento in Tepotlan 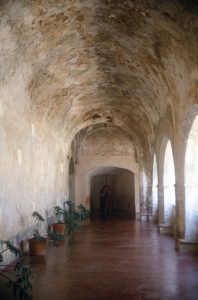 The next day, despite our upset stomachs from the first, and last, experiment with roadside food the day before (real nice, but paid back with a vengeance), we leave early for Tepotlan, to visit the local Convento, and then Tasco, the silver capital of Mexico. Tasco is a wonderful town of whitewashed houses, build against the mountains, a massive cathedral with a very Baroque inside and a jolly square in front. And full of attractive artifact shops! In fact it is the running up to Easter, and the town is full of people who come to admire the processions for which Tasco turns out to be famous. We are lucky to secure probably the last hotel room available. 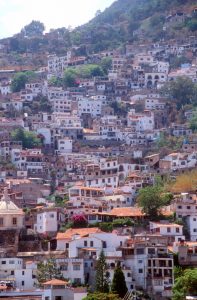 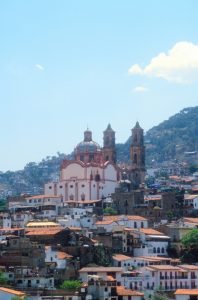 Tasco cathedral, from a distance 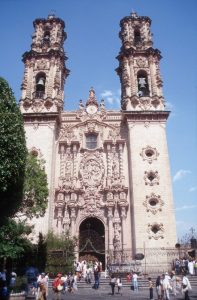 and the same, from nearby 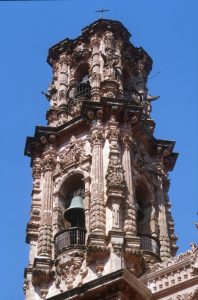 one of the bell towers of the cathedral 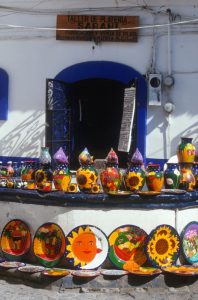 artesanal work for sale in the streets of Tasco 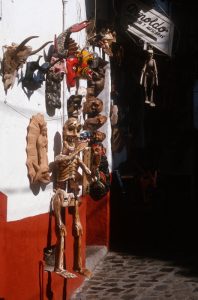 including masks, and skeletons

From Tasco we travel to Xochicalco, a fantastic, ruined pre-columbian site. We circle clockwise, entering towards the left past a temple and a large court, up to the main level with the pyramid of Quetzalcoatl, decorated with bas-relief figures, and then down again via a series of lesser temples to the eastern ball court in front, and finally the northern ball court and a series of caves on the far end. After this, we continue to Puebla, our next target. We had decided to avoid the main motorways, which did slow us down a little, but also brought us to Jojutla, where a whole section of the road was given over to devil vendors, who sell little red devils in all sizes and colours, presumably a local Easter-thing. For the rest the countryside is rather disappointing, boring really, despite some distant views of volcanoes in the mist, or clouds. Puebla, however, is a very nice town, affluent, with in the old part colourful and well maintained buildings, decorated with tiles, murals or just balconies with plants. Our hotel is an old colonial building, too, with probably the oldest working lift in the country, and a beautifully tiled bathroom – although interrupted by a modern-day soap dispenser. 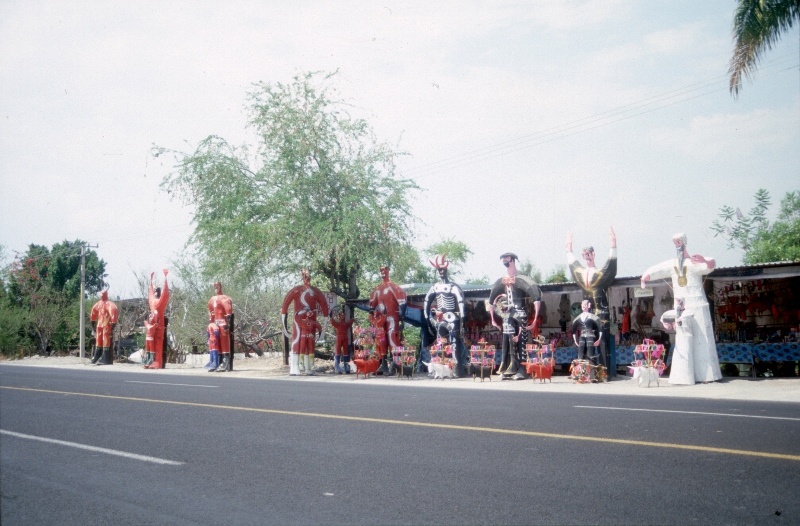 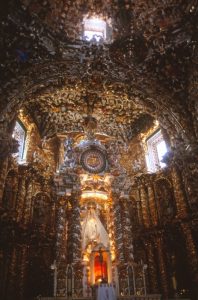 and the inside of one of the many churches here 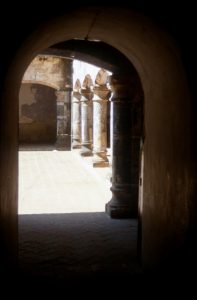 another one of the many (ex-)Conventos

We tour the surroundings of Puebla, but the landscape remains pretty unmoving, mainly flat scrublands, with unattractive villages, single story houses and a basic street grid, without much excitement. The exception is the view of the volcanoes Popocatepetl and Iztaccihuatl, which are much better visible that the day before, with snow-capped cones. The only other uniting factor is that each and every tiny little village has at least one old, or slightly less old, church or ex-Convento, in a wide range of attractiveness, sometimes brightly painted and sometimes almost collapsing. We visit the most well-known ones, the one in Tochimilco, a tiled church with an incredibly detailed Baroque interior in Acatepec, an even more Baroque one in Tonantzintla, and finally the one in Calpon, a Convento with a large yard and towers in each corner. A bit of an overkill of churches, I would say. 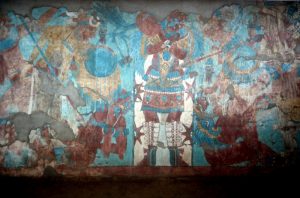 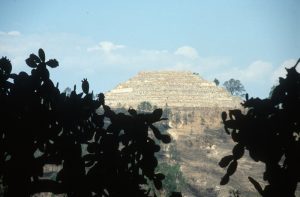 view of the Xochitecl pyramid

On the other side of town are the ruins of Cacaxtla, especially worthwhile for the bright pre-columbian mural paintings. The pyramid itself is covered with a metal roof to protect the paintings, but from the top one has still a nice view of the countryside, the volcanoes – finally without clouds this time -, and the Xochitecl pyramid in the distance. 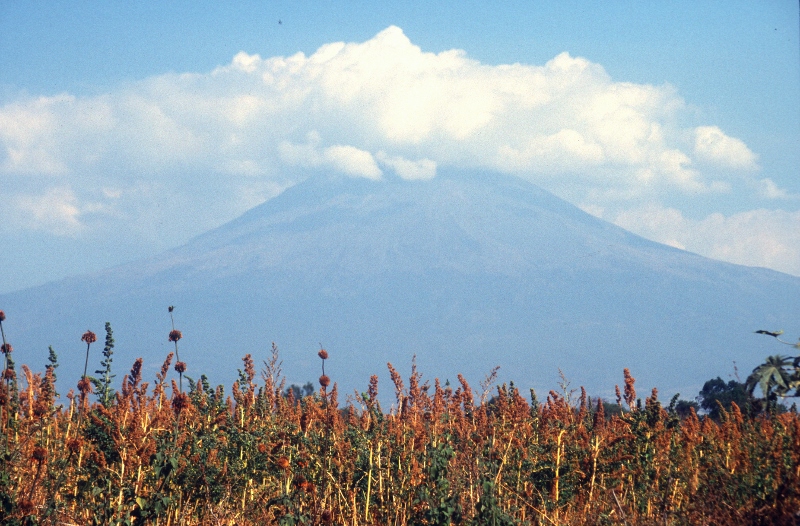 good view of a volcano, either Popocatepetl or Iztaccihuatl