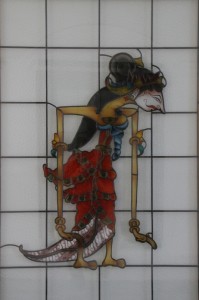 stained glass wayang decoration in the Sultan’s palace in Yogyakarta

The pre-eminent cultural capital of Indonesia has much to go for, from rich palaces to humble neighbourhoods.

Yogya, as it is known, is perhaps the cultural capital of Indonesia, city of the arts. This is where the best Javanese dances are being performed, the best gamelan orchestras play, the best batiks are being produced (or sold, at least, even if they come from somewhere else). All generously supported by the Sultan, currently the tenth generation Hamengkubuwono dynasty. All of this comes together in the Kraton, the walled enclosure in which the Royal Palace stands. Like an English country home, the palace, or part of it, is open to the public, presumably to generate income for its upkeep – which, admittedly, is impeccable. The words that come to mind wandering through the various sections are “tasteful” and “humble”. No multi-story buildings and grandiose towers, no ostentatious display of gold and silver. Instead, simple buildings and pillared courtyards, decorated with stained-glass windows, where several gamelan orchestras play their music, creating a peaceful atmosphere. This is further enhanced by the court attendants, all elderly men in traditional batik costumes, a kris – a traditional curved knife – stuck in their belt. 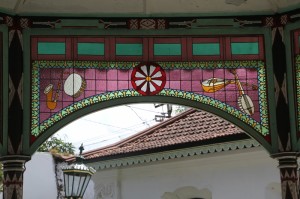 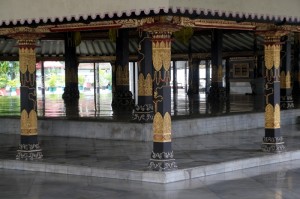 central platform in the Yogyakarta palace 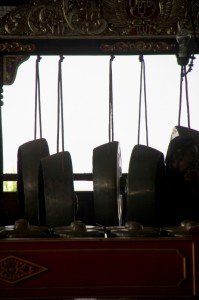 part of a gamalan orchestra in the Sultan’s Yogyakarta palace 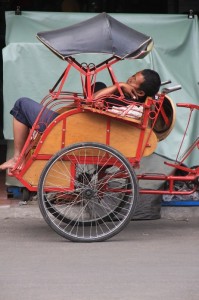 becak driver resting, inside his own becak

Outside the palace, the Kraton is equally peaceful, a network of narrow streets and alleys unsuited for modern traffic, which thus avoids this part of town. Instead, becaks – bicycle taxis – and andong – horse-drawn carts – ferry passengers around, in an unhurried pace with perfectly suits the environment, in which walking is an equally fine option. Wandering the alleys, sometimes not knowing what is street and what is private courtyard, nobody seems to be bothered by the tourist. Not much seems to have changed in a hundred years, here, krupuk is still drying on the roofs, and laundry outside the wooden houses. Perhaps the only difference is that some of the old palaces have crumbled, although the Waterpalace, a now disused playground for the Sultan’s harem, has been restored nicely. 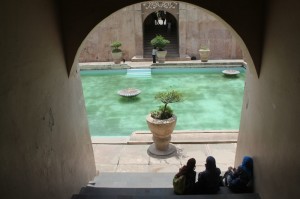 andongs parked in the Kraton 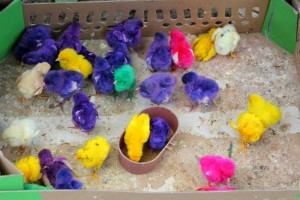 The bird market – Pasar Ngasem – used to be located inside the Kraton, too, but has now been moved well south of this neighbourhood. If you want my advice, don’t bother. Animal welfare is obviously not something that concerns the average Indonesian, who sees nothing wrong with keeping tens of birds in a small cage, or an owl in a cage so small he cannot turn, let alone spread his wings, or a crate full of brightly painted young chicken. Let alone the status of other animals, lizards and tortoises stacked on top of each other, cats and dogs tied outside with no water. This cannot have been the idea when man was put on top of the food chain. 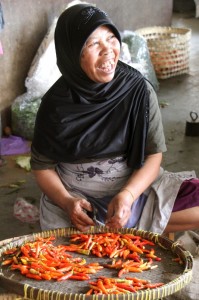 woman chopping chillies in the market 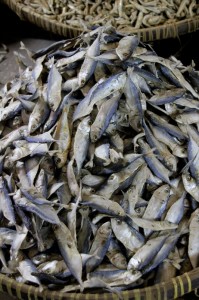 dried fish is an indelible element of every Indonesian market

North of the Kraton is Yogya’s main street, Jalan Malioboro – named after the Earl of Marlborough, for some reason or another. Lively, full of shops, full of people. With an enormous inside market over several floors, and in adjoining buildings. And with some of the colonial remnants, the utterly uninteresting Dutch Fort Vredeburg, the nicely restored Governor’s residence now in use as presidential palace, and the impressive Bank of Indonesia building, its construction clearly also pre-dating independence. 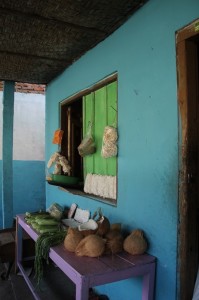 hole-in-the-wall shop in the river neighbourhood 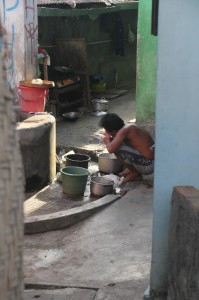 East of the market, east of Jalan Malioboro, one could do worse than walking towards the river that passes through town here, and explore the kampongs, the neighbourhoods, along the water. Especially in the late afternoon, the working day finished, people are relaxing around their homes. Charcoal grills are being fanned everywhere, sates being prepared. In their own surroundings, fewer women, hardly any actually, are covered, and it bothers nobody. This is mainstream Javanese society, this is how the majority of towns folk live, I suppose. Small houses, many neatly maintained; large collections of plants in front, some flowering; small shops, not much more than a hole in the wall; the inevitable motorbike, even in these narrow alleys. Wonderful atmosphere, everybody so friendly, smiling, asking where we are going – the concept of just taking a walk remains alien, of course. Here the “hello mister” or the “where are you from” is a lot less annoying then in other parts of Indonesia.

Yogya is well located for other tourist Javanese highlights. Nearby are Borobudur and Prambanan, two fabulous temple complexes, whist Wonosobo and the Dieng Plateau are also within relatively easy reach. A short ride east brings you to Solo (Surakarta), the other Royal capital on Java. 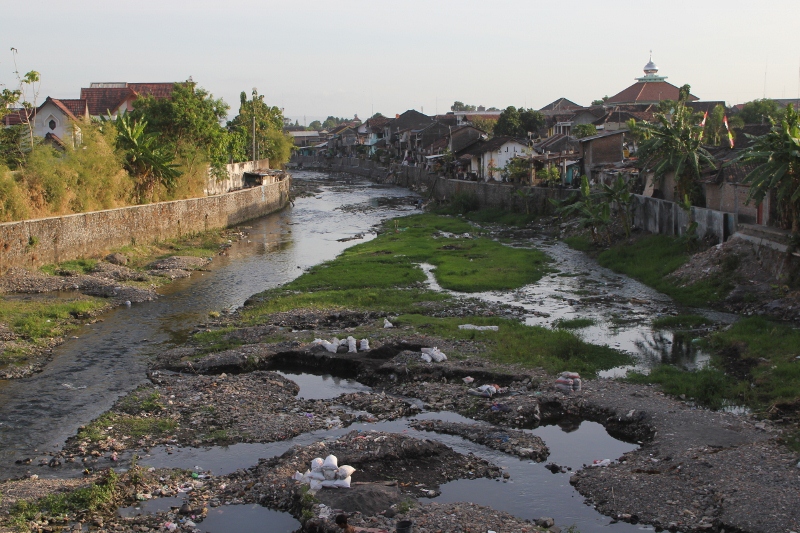 the river flowing through Yogyakarta