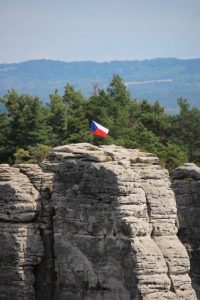 the Czech flag on one of the rocks in Cesky Raj, or Bohemian Paradise

We are not the type that travels during the peak holiday season in Europe. July and August we spend at home, because the rest of the world is then happily holidaying – it is far too busy everywhere, far too many screaming kids, far too difficult to find affordable accommodation, and impossible to strike up a reasonable conversation with the locals, because they have only one thing on their mind: how do I get the most out of the tourist in the least possible time. And that is fair enough.

But then Corona came to Europe, the pandemic with all its horrible effects, the victims, the lockdowns, social distancing and, especially, the total loss of trust in others, for example how other countries manage the crisis. Resulting in the decision, of many people to stay at home this year, during the summer vacation; after all, you never know. Combine that with travel bans for most non-Europeans, and suddenly travelling in Europe – as soon as the borders open again – becomes attractive. So, which are normally the most popular European destinations, flooded by the tourists? Italy comes to mind – Venice, Florence, Rome -, and may well be subject to a visit soon; Barcelona and Dubrovnik we know well enough, Amsterdam is our back garden. Prague! One of Europe’s top tourist site, but now – for sure – without the Chinese and the Japanese, and – perhaps – also without the bulk of the European tourists: they stay at home this year, and I gamble that most Czechs who stay at home, too, have already been to Prague. 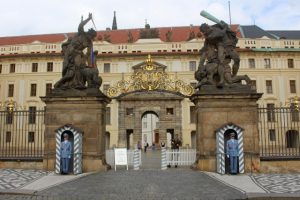 the entry to the Hradcany, the castle in Prague, a national symbol

Besides, the Czech Republic has had a relatively mild Corona pandemic, is therefore pretty relaxed about it, and is less than a day’s drive from where we live (if anything goes wrong during our trip, we’ll be home again in no time). So off we go, not just to Prague, but to the whole Czech Republic. For a three-week trip, taking in the ‘hrads’ and the ‘zameks’, the castles and the palaces – of which there are many -, and the medieval town squares with their ‘radnices’, town halls – of which there are many, too. The thermal baths in Bohemia, the western part of the country, where the European elite gathered in the 19th and early 20th Century. The churches, gothic, baroque, but also intriguing wooden churches in Moravia, the eastern part of the republic. And the nature, the various National Parks with not too high mountains, the lakes, lots of not too stressful walking opportunities, ideal for us. We will test the Czech beers – the origin of Pilsener is in the town of Plzen, and that of Budweiser is in Ceske Budejovice -, and the Czech wines; after all, they are being grown just across the border from the quite successful Austrian varieties. To be honest, we have little faith in the cuisine, but we are open to trying it – in any case, we won’t have much choice!

So watch this space in the next few weeks, or maybe a little afterwards, when I put our experiences on line. Romania and Bulgaria were great, back in 2015, I am sure the Czech Republic will be equally interesting and fascinating.

We start in Loket. 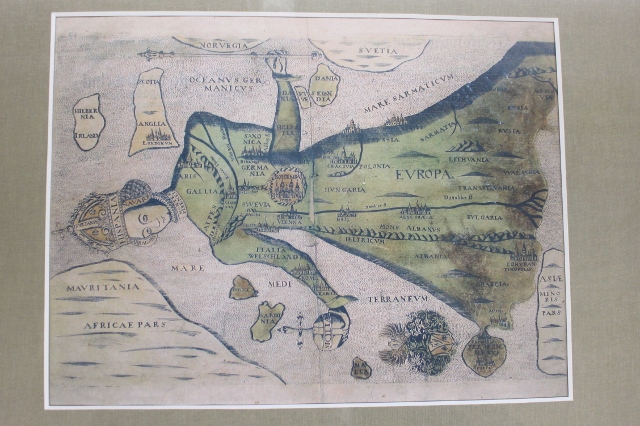 an interesting projection of Europe, seen from a Medieval Czech point of view, in one of the Prague museums

One Response to 01. the Czech plan