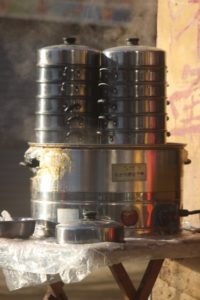 outside one of the many restaurants in Bingzhongluo

Touristic Bingzhongluo lacks a bit of services, especially for non-Mandarin speakers, but does offer beautiful surroundings.

More than any other place we have been so far on this trip, one-street Bingzhongluo lives from tourism. Or so it seems, because the only one street is lined with hotels and youth hostels, as well as an inordinate number of restaurants for such a small village. 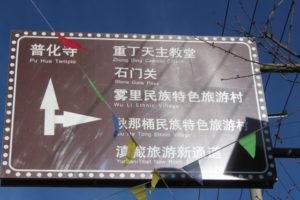 road signs are also not detailed enough for walkers

And yet, for non-, or at least for limited-Mandarin speakers, it was difficult to gain any relevant information. We planned to stay a couple of days here, to do some mild trekking further along the river, and perhaps to a few ‘ethnic’ villages, but we could not get hold of any for us intelligible maps. The best we managed was a photo from a map on the wall in a guest house, entirely in Chinese. Our hotel staff, but also the staff of the various youth hostels that claimed to be ‘international’, and had plenty stickers on the windows to prove it, none of them spoke any English at all. None of them made a great effort to try to understand us, either, except for a chap who had a translation app on his phone (something we sorely lacked ourselves: poorly prepared!). Neither did we encounter any tourist touts, that irritating, persisting type of people offering excursions or trips or other packages, that invariably populate any tourist site: you hate them when you don’t need them, but when you do they are not there. Perhaps we were just out of season. It was, after all, bitterly cold at night, freezing, and during the day it didn’t get much better, unless you were in the sun, which thanks to the steep mountain sides was not everywhere that easy. 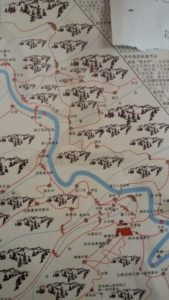 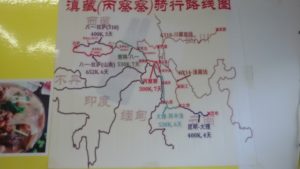 one of the wall maps, in another restaurant 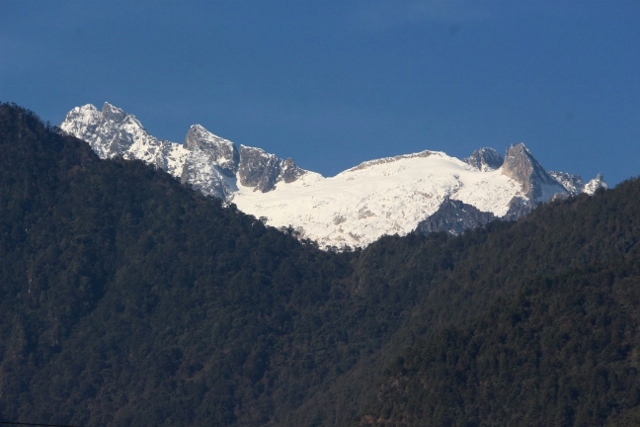 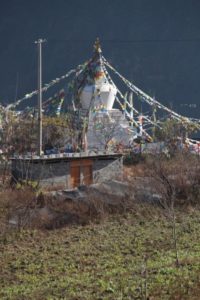 there is quite a bit of Tibetan influence here 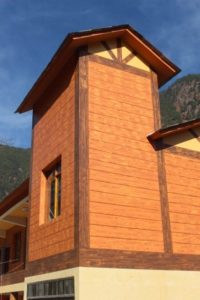 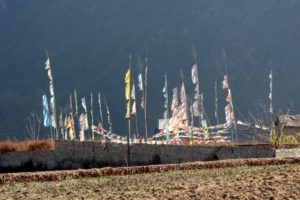 with stupas and prayer flags in several place

In the end we managed to walk, first through several hamlets and then by the side of the main road, to a further gorge of the Nujiang, where we spotted the once famous Tea Horse Caravan Route on the other side of the river, a track partly hewn out of the rocks along which the caravans from Yunnan to Tibet travelled their merchandise. The influence of Tibetans in this area is clear from the plenty prayer flags that have been strung in trees along the road, and from the presence of small stupas. The houses in the hamlets are part authentically wooden houses, part new developments, which are concrete, but have been painted with wood colour, including wood nerve, to blend in, so to speak. See for yourself. 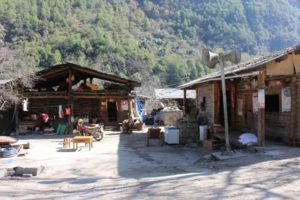 there are still some real wooden houses around 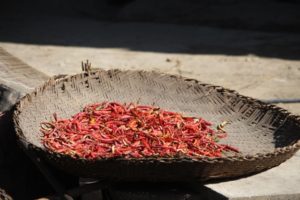 with the usual garden produce drying outside 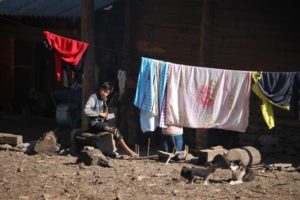 as well as the laudry (equally drying) 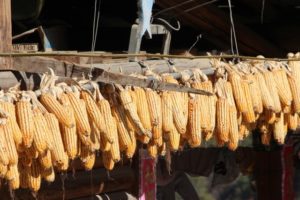 and it is corn cob season 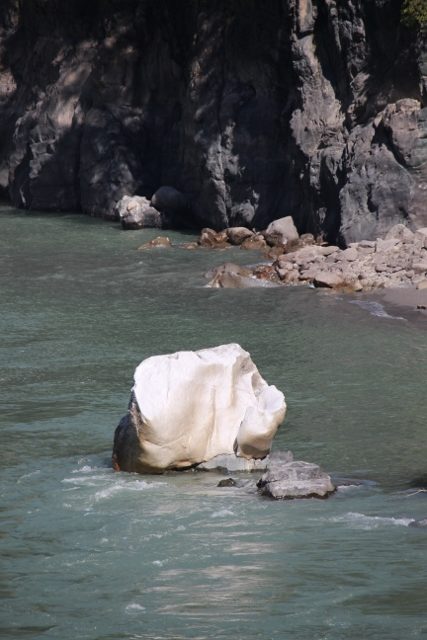 rock in the Nujiang 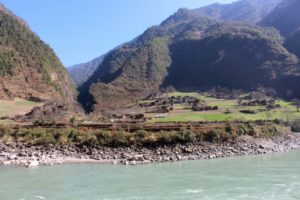 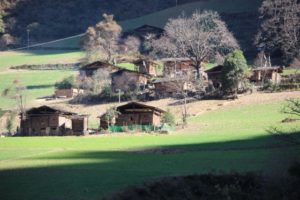 for the time being, with genuinel wooden houses

A little further upstream we reached Wengli, finally a picturesque wooden village set in Alpine-type meadows. We never made it to any of the other villages around, not trusting the vague arm-waving as any form of accurate directional information, and not finding anybody willing to guide, or to drive us there. At least the market in town, despite being a rather humble affair, provided a little compensation: a very small part of the ethnic village had actually come to us. Once again, mostly traditional headscarves, whilst the old Mao cap also proved popular. 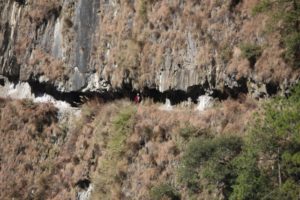 and this is the famous Tea Horse Caravan Route, here hewn out of the rock at the other side of the river 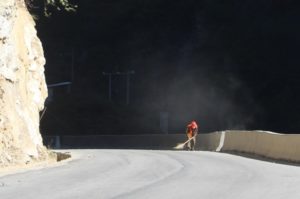 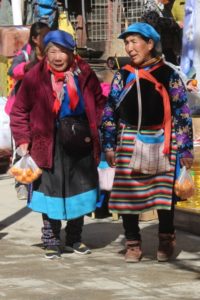 ethnic minority women at the market 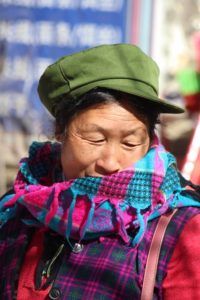 but the old Mao cap is more popular 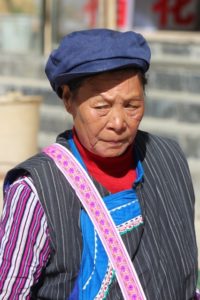 or in combination with minority dress 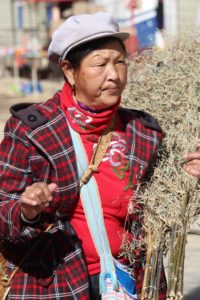 in any colour, and in isolation 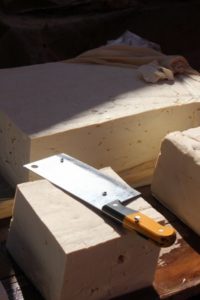 tofu in the market 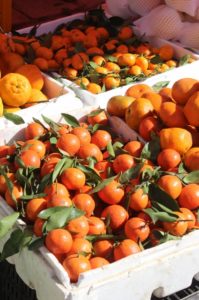 and mini clemintines are in season

I suspect the future of Bingzhongluo, nevertheless, will be a bright one. As it turns out, all the frantic road works on the way to here don’t stop, but continue past the village, as part of grand efforts to revive that Tea Horse Caravan Route, in the form of what is called the Yunnan-Tibet New Road. The Chinese are not just improving the road along the river, they are building a full-fledged connection from here to Llasa. If they were just to add a little tourist infrastructure, too. Until then, you just have to come much better prepared than we were.

next: backtracking to Baoshan again. 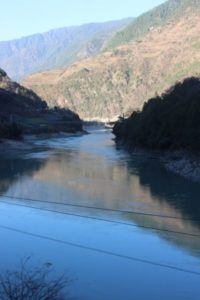 another view of the Nu River 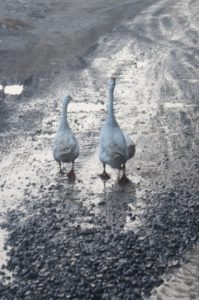 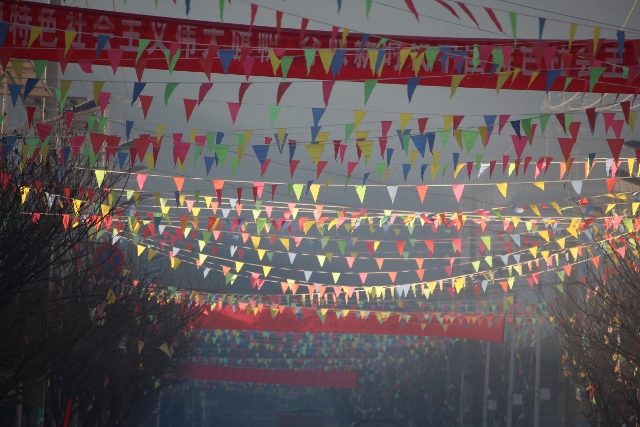 one-street it is, but nicely decorated, in the early morning sun