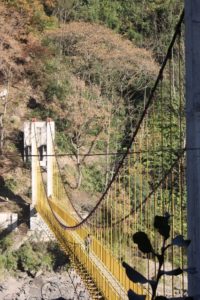 one of the many hanging bridges across the Nu River

A journey up the Nujiang Valley is a mixed experience, natural beauty in the shadow of a traffic chaos.

We move in stages. The two towns identified as potential stop-overs, ‘two-street’ Fugong and ‘one-street’ Gongshan, as the 2017 version of a reputable travel guide calls them, are, according to our various sources, including local bus drivers, no more than 3-4 hours drive apart, and from Liuku to Fugong is a similar distance. Overseeable. 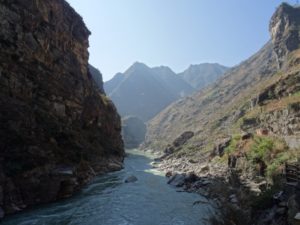 another view of the Nujiang, the Nu River

Yet, a small problem arises in Liuku’s bus station, where, despite having been told the opposite by the receptionist of our hotel, there are no busses anymore to Fugong. Neither to Gongshan, and no, not tomorrow, either. Weird. All tickets sold already? Or because it is Sunday, today? Not wishing to hang around in Liuku any longer than necessary, we find a chap with a shared taxi, who is prepared to drive us to Fugong. Only later I wonder whether this guy, who we already met on the way to the bus station, is in fact the cousin of the lady not wanting to sell us any tickets. Anyhow, we left by car instead of by bus, and paid about ten times as much, which in any case was still not very expensive. For what turned out a 5.5 hours’ drive. 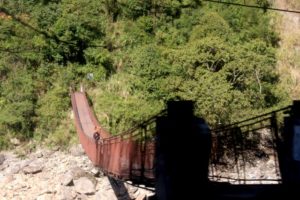 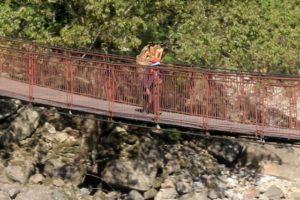 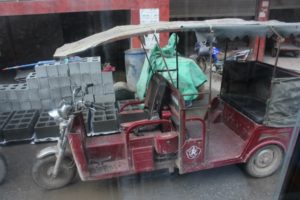 Almost the entire road, 125 km of it, is in fact a building site. Roadworks equipment is everywhere, to work on the widening of the road, by drilling into the rockface. Which leaves large piles of rock on one half of a road, which is in any case in most places barely wide enough to have two lorries pass each other. And lorries there are, not only those involved in the road works, but also many others, some of which are so big you wonder how they have ever made it here. Where there are no piles of rocks from road works, there are piles of rocks from landslides, creating the same type of obstacle. As do those places where the road has partly disappeared into the river. As if this isn’t enough to frequently block the traffic, in the small towns we pass people have parked their cars, and their tuktuks, haphazardly along the road. Nobody seems to be bothered: isn’t that what you used to do with your bicycle, too? Except that now in each of those towns the traffic comes almost to a complete stand-still, with trucks carefully inching past each other, wherever there is a little room. Creating space by reversing a little, for an oncoming truck, is out of the question, that would be losing face, and besides, so many other vehicles have already piled up behind, that reversing isn’t an option anyhow. And the occasional truckdriver who holds back allowing an oncoming one to pass a narrow stretch gets punished by the drivers of smart sedans and SUVs, who immediately see an opportunity to overtake. So everybody pushes relentlessly forward. 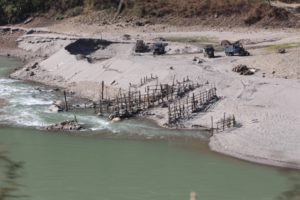 wooden frames occur all along the river, don’t know what for (anybody?)

To keep the dust under control, a tanker slowly ploughs the road spraying water, which turns the dust into mud. The tanker slows down the traffic further, and the mud sprays the windows of our car. As does the mud that splashes out of the many potholes, and from the unsurfaced stretches of road currently under repair.

All together this doesn’t contribute to the experience of driving a scenic route.

We reached Fugong, considerably bigger than ‘two streets’, where we found a hotel near the bus station, for an early departure the next day. Where once more we were told that there are no busses. Come on! But now it transpired that the Chinese are very particular about the type of bus you ask for. My Mandarin-speaking travel companion had asked for a long-distance bus, which translates into a slightly more luxurious version of bus, and no, these don’t exist on this route – for obvious reasons. When we insisted, one of the staff finally remembered that there was, indeed, another bus, but smaller. Which was in fact equally comfortable. And which would leave in half an hour. And took, instead of the promised 2.5 hours, almost 5 hours. Same story as above. 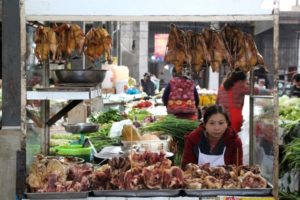 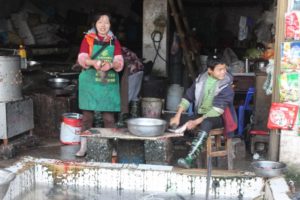 and the fish monger, also Fugong fresh vegetables in the market 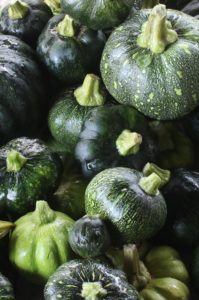 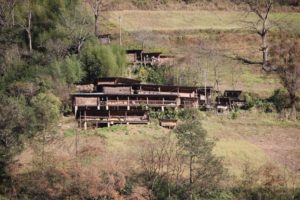 The scenery did improve, though, and gradually the road became quieter, and the developments less conspicuous. Locally, we spotted even some wooden villages, or at least villages with some wooden houses left. The driver was kind enough to stop at the tourist highlight of the route, the Stone Moon, and let me off the bus to take pictures. First I thought the Stone Moon was the bend in the river, which indeed had somewhat the shape of a new moon. But after more pointing and shouting, I discovered, high up the mountain, a round hole: a much more likely candidate for the Stone Moon. 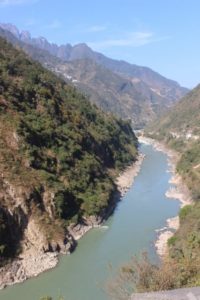 does this look like a new moon to you? 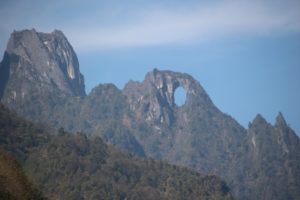 but this is the real Stone Moon, a huge hole in the mountain 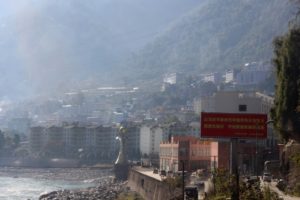 ‘one street’ Gongshan, just to give you an idea

Gongshan may be mostly ‘one-street’, but it is a very long one, flanked by plenty high buildings. The bus driver parked the bus at the entrance of town, vaguely pointing along the road to where the connecting transport to Bingzhongluo was supposed to depart. As Gongshan wasn’t particularly attractive, we had decided to push on. After all, Bingzhongluo was only another 1.5 hours drive. We started walking – what else can you do? Until somebody suggested we take a shared taxi, a great idea, as the departure point was indeed at the other end of that very long ‘one street’. 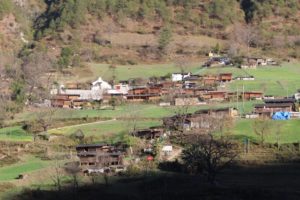 the village of Dimaluo, just before Bingzhongluo, note the white church

We picked up the next bus, a little smaller, and a little tighter, than the previous one, and took off. Of course, the 1.5 hours became 2.5, but finally we arrived at Bingzhongluo. Which is, indeed, a one-street village. 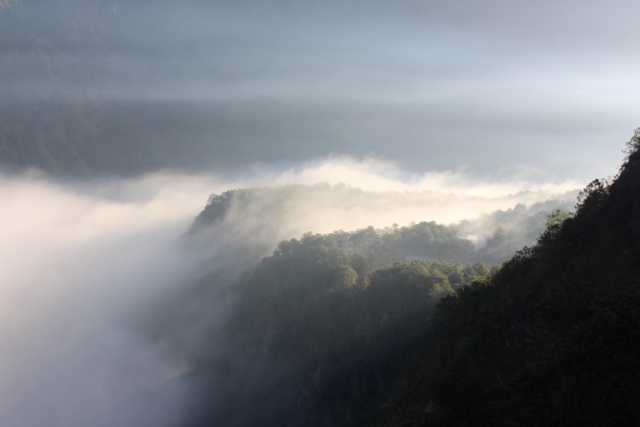 and morning mist over the river