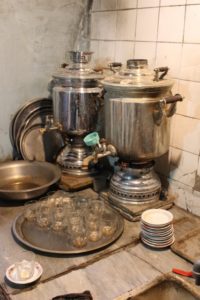 A wonderful city, with wonderful people: Tabriz has it all, from historical buildings and a world-famous bazaar to fresh fruit juice parlours and the best pastry shops.

Tabriz, the second-biggest city in Iran, has a history of its own. Garden-of-Eden myths apart, it has been the capital of an independent entity, first shortly after Tamerlane had ravaged the place, and once again very briefly as autonomous South Azerbijian after the Soviets withdrew at the end of WWII – only to be dealt by the Shah in 1946. But for most of its history Tabriz, and the ethnic Azeri people that make up some 25% of Iran’s population, has been an integral part of Iran. 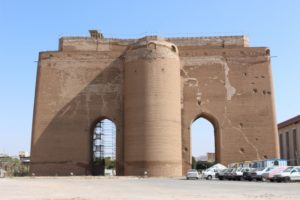 the Argh-e Tabriz, a monstrous brick structure, proof that not everything old is necessarily beautiful

Traces of the post-Tamerlane independence are the huge Argh-e Tabriz, an enormous brick structure that formed the basis of Tabriz’ early 14th Century citadel, and the Blue Mosque, built in 1465, but badly damaged in several 18th C eartquakes. Most of the blue tiling now is replica, very little original tiles remain, but thanks to the restoration in the 1950s it is still an impressive building. 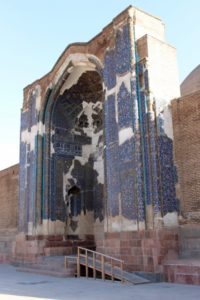 entrance of the Blue Mosque, or what remains of it 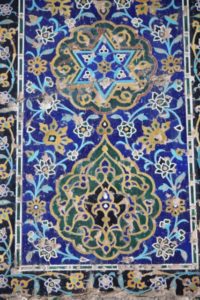 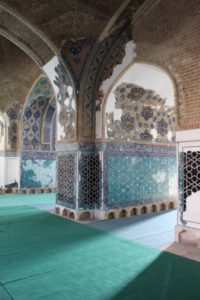 inside much has been restored, including a lot of the tile work 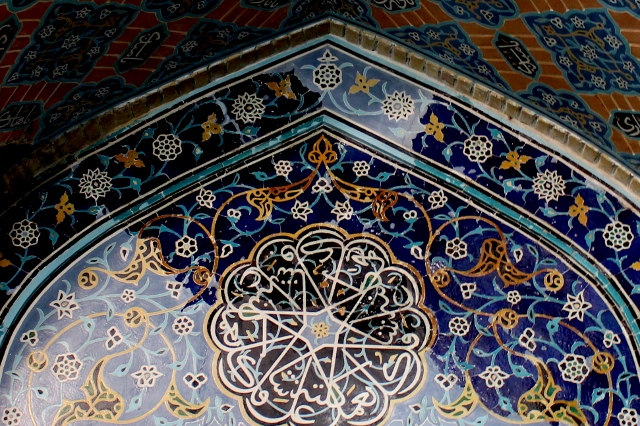 the dark tiles are original, the lighter ones new – Islamic restoration concepts specify that you should not use the same colours as the original 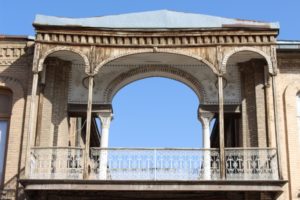 the outside of the bazaar has some attractive old architecture 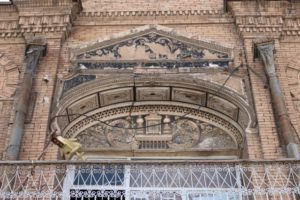 here, too, balcony and facade decoration, complete with columns, outside the bazaar 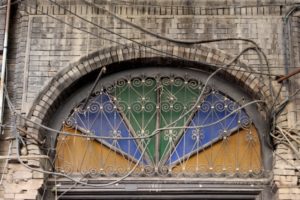 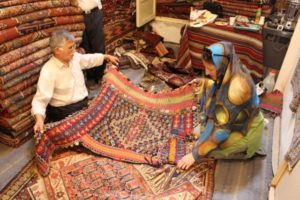 the fabulous kilim shop of Yacoob and Jaafar, and a haphazard tourist 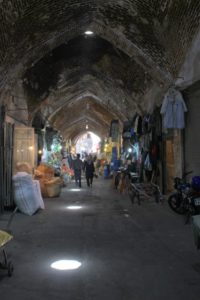 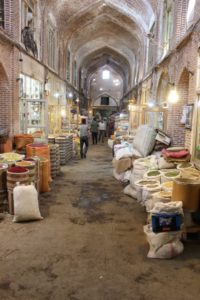 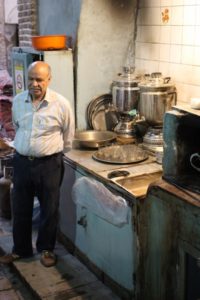 the tea seller and his equipment 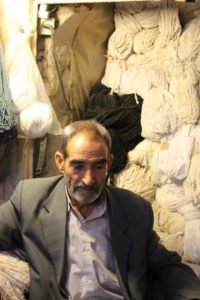 and the copper seller, proudly in between his wares

The real gem of Tabriz, however, is its covered bazaar, an seemingly endless collection of vaulted halls linked by corridors, sometimes stepping up or down to different levels, with a multitude of caravanserais, now mostly open squares, in between. And shops everywhere, of course, with all types of merchandise, from colourful ropes to colourful spices, colourful fruit to colourful carpets. Especially the carpet section – the one we couldn’t find in Tehran – was a delight, where we spent easily a few hours, drinking tea and admiring the collection of kilims of Yacoob and Jaafar. It was immediately clear that we wouldn’t buy anything, were just interested passers-by, but the two men obviously enjoyed showing of their museum pieces – and museum pieces they were! 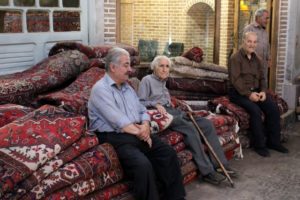 men sitting in one of the carpet sections of the bazaar 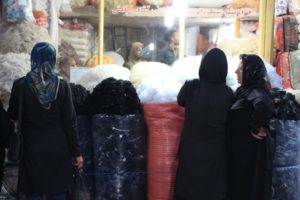 and women shopping for wool

After a while we emerged at the other end of the bazaar. From one of the fruit stalls that populate the fringe we got ourselves some peaches, they looked so good. And they were, as we found out a little later on a bridge outside the bazaar: devouring them was a pretty messy affair. Whereupon a taxi stops along the curb, the driver gets out – lets his passenger wait – with a box of tissues, and offers us some to clean our hands. And happlily gets back into his car to continue his ride. In most of the world a taxi driver is your natural eneemy, here they are your best friend!

But there is more than just the bazaar, the argh and the mosque. Wandering through Tabriz, like in Tehran, yields some architectural gems, mostly dilapidating. A door here, a courtyard there, or an almost collapsing balcony. Behind high walls in narrow alleys tentalising glimpses of old facades present themselves, but most of it stays invisible, behind the closed doors. 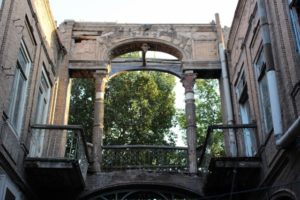 just an old house and a courtyard, along one of the main streets 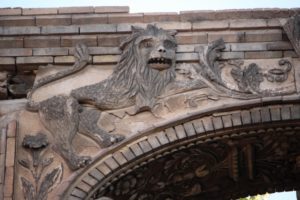 lion decoration on the arch spanning the entrance of the house 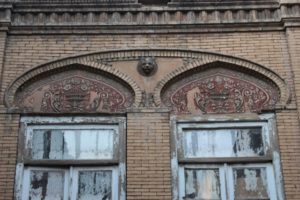 and window decorations, same house – in need of some maintenance

On a map from the tourist office we find a photograph of one such buildings, the Nikdel House (or is it the Berhad House, same location, different map). No information, not in guidebook either, no mention on internet. Our attempt to find it leads to another toruist agency, nobody in the office. We walk up the stairs, where we find a man, obviously working here, who immediately grabbed a map – the same we had -, and started pointing out the highlights of Tabriz, not hampered by the fact that he only spoke Farsi, and we didn’t. But when I mentioned Nikdel House he understood, and then, easiest way, he walked us out the agency building, to the next street, 500m in, and pointed at the Nikdel House in the distance. Which turned out to be closed for restauration, entry gate barricaded, we only saw the front of the place from the outside. But, we found it! 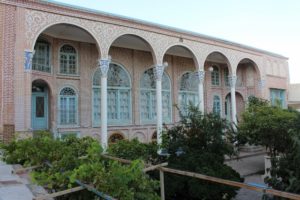 the Nikdel House, from the outside

Next for a fruit juice: everywhere in Tabriz are small shoebox-type shops that are stacked with fruit, which with the help of an array of kitchen mixers are expertly turned into a variety of juices, which can then be combined again to create even more flavours, with or without icecream. The thing to do at the end of the afternoon, the gin-and-tonic substitute, but a perfectly acceptable one. 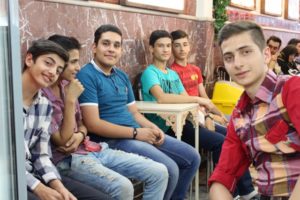 Tabriz youth enjoying their juice in the fruit juice parlour 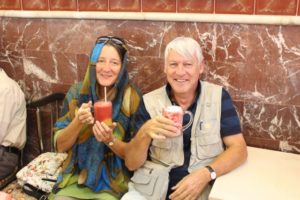 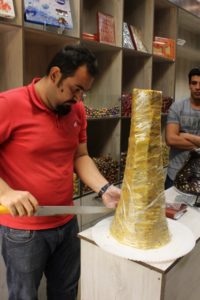 this is a fabulous honey-and -coconut sweet, of which we had just a few slices

By the end of the afternoon, early evening, the streets fill up again. We aimlessly walk around a little more, enjoying the atmosphere, only to stumble upon ‘sweets street’, where we found not only sublime bhaklava, but also a piece of walnut-with-pistachios candy, and a honey-and-coconut paste, marzipan-like. In fact we found a whole lot more, and the guy who ran the shop let us try several other sweets, too, all equally sublime, but we showed some restraint when buying. The concept of loosing weight, this trip, because of the total lack of alcohol, may have to be revised a little…

But I love Tabriz!

next: excursion through the Aras River Valley. 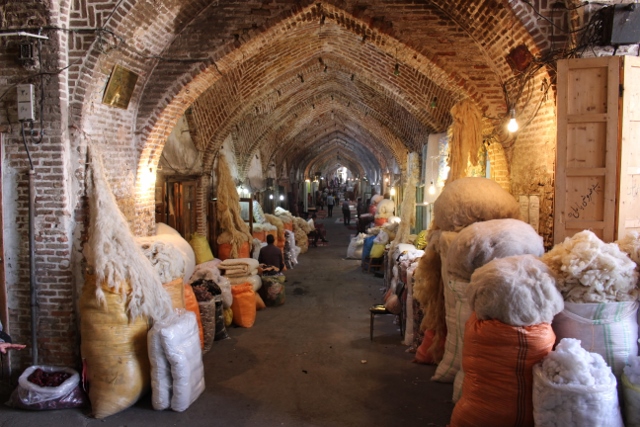 a voulted corridor in the Tabriz bazaar