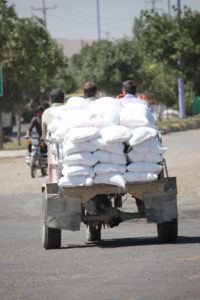 We keep on learning about Iran’s public transport system, and how to use the taxis and the busses.

We still need to get used to traveling, in this country. From Ardabil to Tabriz there are busses. So we take a taxi to the bus terminal. When we tell the driver that we want to go to Tabriz, he goes the other direction, away from the terminal. He is not going to bring us all the way to Tabriz, now, is he? We insist on the terminal, and reluctantly, he turns, and drives us to the rather shoddy bus station. Where we arrive at 10 am; there turns out to be a bus at 10.30, so all OK. We split, one looks after the luggage, the other goes foraging, after all, we still have half an hour. At 10.15 the Tabriz bus departs, without notice. Without us. Oeps. Well, there will be another one, no doubt. Ten minutes later the same bus returns, loads us, and one other passenger, and departs at exactly 10.30. All OK again. But such a big bus, with two drivers and only three passengers, for the four hour trip to Tabriz? 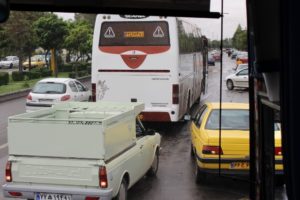 unofficial bus station, where a four lane road gets reduced to two thanks to waiting busses

Two minutes later, the bus is overtaken by a taxi, which stops in front. Another passenger, who had just missed the bus. Where in most countries the bus would now drive endlessly through town, one guy hanging out shouting ‘Tabriz, Tabriz’, trying to pick up more people, here none of that happens, we follow all the road signs to Tabriz, and soon we are in the outskirts. Where the bus stops, at a round-about. Waiting for passengers to Tabriz, Endlessly. And indeed, more taxis arrive, more peeople get in. Another bus, also for Tabriz, stops, and does the same, in the process now blocking two of the four lanes of the main road out of town. And then its start to dawn on me. The taxi driver was not going to Tabriz, he was going to bring us here, where every bus to Tabriz stops. Much easier, much quicker, no doubt much cheaper, too. 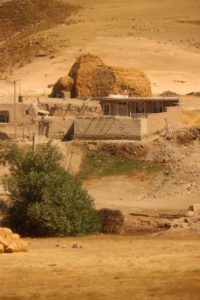 with hay stacks growing by the day, it is that time of the year 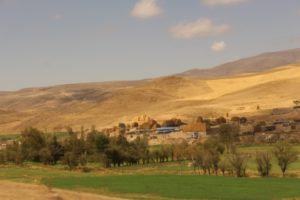 country side between Ardabil and Tabriz

The drive itself? Once more uneventfull, but a more attractive landscape now, reminiscent of our days in South East Turkey, which indeed is not very far away from here. Rolling hills, mountain plateau, all pretty arid. The farmers were busy collecting hay, for the rest agriculture had come to a halt, for now. The Zaymed pick-ups, conspicuously bright blue Nissan copies that are being used for transporting close to everything possible, are a ubiquitous element in local traffic, not very fast, but all the more present. And Tabriz? Wonderful, more about that next. 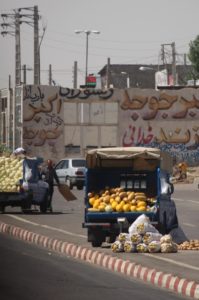 melon season, which literally means truck loads of melons along the roads 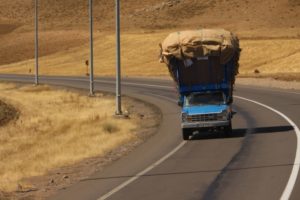 the Zaymed, countryside truck par excellence, comes only in blue 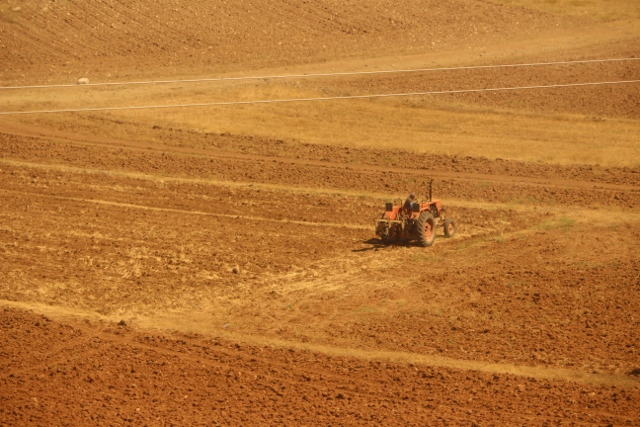