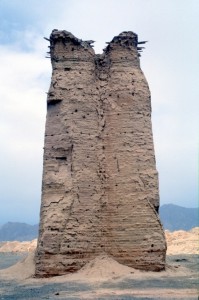 beacon tower in the desert outside Kuqa

Discoveries near Kuqa triggered the treasure hunt some 100 years ago: the merits of theft, or otherwise.

The Kuqa area is another area that is rich in ancient desert cities and caves, and perhaps the origin of the Western interest of the early 20th century. It was here that local treasure hunters found a couple of ancient manuscripts while digging for gold and silver. The manuscripts ended up in the hands of the local elite, who, through a chance encounter, sold them on to a British officer who was investigating a murder, who passed on the text to a Anglo-German orientalist who worked in Calcutta, Dr Hoernle, who recognised it as 5th century Sanskrit, published about it, and so unleashed the hunt for Taklamakan archaeological treasures.

Sven Hedin and Aurel Stein were just the first of a string of explorers, including the Germans Grunwedel and Von Le Coq, as well as French and Russians. The Japanese also arranged several expeditions, and even the Americans joined the fray, albeit late, just before the Chinese closed off the area for further exploration – belatedly realizing that all their treasure were being removed. The result of all of this is that visiting the desert cities and caves is a somewhat disappointing experience, requiring a significant dose of imagination. The best frescos are distributed across the world, in museums in London, Delhi, Berlin, Saint Petersburg, Tokyo and Paris. The Kyzil cave complex near Kuqa, for example, has been ‘investigated’ by Japanese, German and Russian scientists, who have all carried off crate after crate packed with frescoes and sculptures.

Whether this has been a good idea, is hotly debated. The Chinese obviously don’t think so, but at the time the explorers did their work, there was little local conservation going on – on the contrary, local farmers were trying to get hold of the pigments to use as fertilizer, dry wood to use as fuel, and any building materials, undermining the integrity of the sites. Consecutive expeditions described increasing damage to the sites by locals, but perhaps this was also encouraged by the interest of the expeditions, who knows? In addition, Muslim fundamentalists would see nothing wrong with poking out eyes from frescoes and chopping of heads of sculptures. White Russian soldiers fleeing the revolution have been quartered in the Dunhuang caves, and have left scores of graffiti on centuries-old paintings, and so did Chinese soldiers during the turbulent 1930-40s. Not to speak about the unfathomable damage done by enthusiastic Red Guards during the Cultural Revolution in the 1960s.

Yet, a significant part of the German collection was destroyed by Americans during the Second World War, when bombers attacked Berlin, including its museum. Lots of frescoes are lingering in the vaults of museums, not deemed important enough to display. Stacks of manuscripts have, even today, not yet been catalogued, let alone translated, and are collecting dust in the cellars of national libraries outside China. It is quite conceivable that, these days, the Chinese would give these documents more attention, and would also provide a better home to the frescoes  if they would be returned. Few people would visit the museum in Delhi to admire ancient Turkestan paintings, and few would pay attention in Saint Petersburg’s Hermitage, among so many other art treasures, whilst those visiting China will likely display much more interest in these unique paintings.

Maybe it is time to return some, if not the bulk, of these items to China. The West (and to a lesser extend Japan) could then claim to have been good caretakers, a better position to be in than having to defend themselves against charges of robbery. 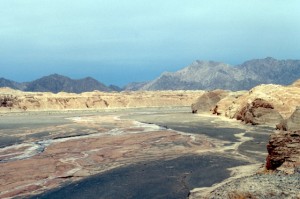 river in the desert 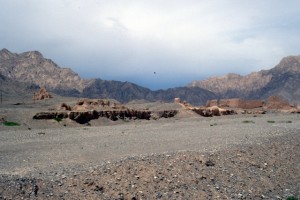 Subashi, ancient city it is