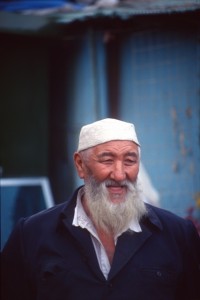 An exciting market town, and a lot less exciting ruins. 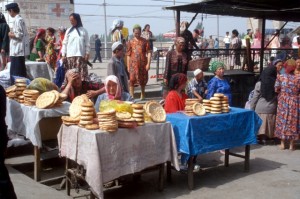 bread shop at the beginning of the market

Kuqa then. Kuqa is divided in a new city part, by which I have mentioned everything there is to say about this part, and an old part. And here is where it really happens. The reason for pushing for progress the last few days was to be in Kuqa on Friday, the day of the weekly market, and a warming-up for Kashgar’s Sunday market. One does not need to ask for directions, just follow the crowds. Long before the bridge to the old town the market had started, with the usual street vendors everywhere. From here one is automatically drawn to the centre of the market, the square in front of the mosque, where the old men sit in the shadow of some big trees. 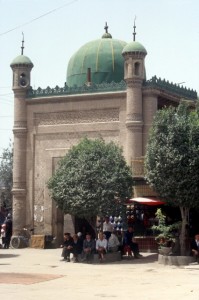 the mosque in the old town 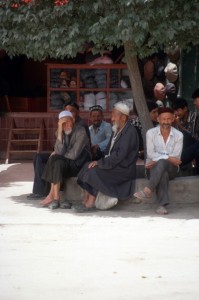 and the men in front of the mosque

But the difference in Kuqa is the colour, not only of the vegetables and the fruits, dominated by big, yellow melons, not just of the parasols and make-shift stall covers, but especially the colour of the people. The Uygurs wear bright clothes, especially on a day like market day, and it shows. 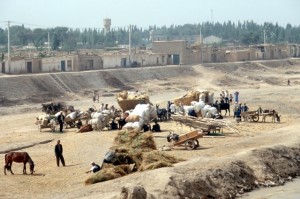 No cars are allowed in the old town, and the only transport is by bicycle, or by horse- or donkey-drawn carts, which serve as taxi’s. You just jump on whenever you feel like it, and jump off again if you had enough, or reached your destination, for a minimal fee. Progress is slow, as the streets are full of sheep and cows on their way to the cattle market at the back-end of town. And full of people, Uygur, not Chinese. Profound faces with big noses, heavy eyebrows, long white beards. Us curiously looking at them was no problem, as they were just as fascinated by us, they obviously had not seen that many foreigners; they would unashamedly stare at us for whatever long it took to take in the impression. It was just as well that our teeth were not checked at the cattle market. 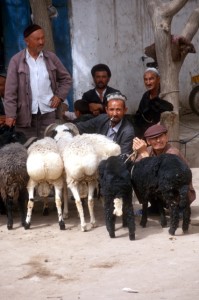 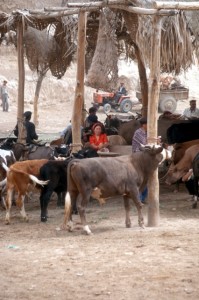 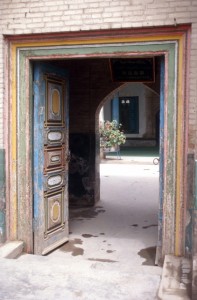 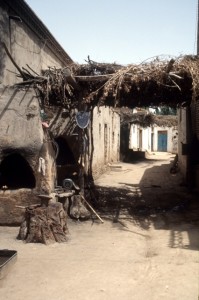 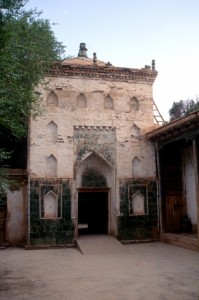 the tomb of Molena Ashidin Hodja, whoever that may have been 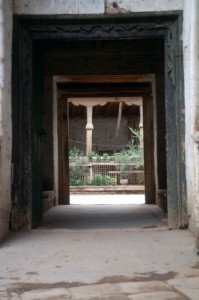 courtyard, part of the tomb structure

The next day we visited the few tourist sites around Kuqa, the obligatory Buddhist caves, another ruined city, and an old signal tower, which used to be part of a string along the edge of the dessert to pass on messages. The Subashi ruins are exactly as their description, ruins, although still ten times more impressive than the ruins of Pileng, the ancient city remains of Kuqa itself. A sign board, only in Chinese, proudly announces this site, which would otherwise not have been recognised from the small hump of mud and bricks only.

The Buddhist caves, the Kyzil caves, were ransacked, but not like some of the other caves, which had fallen victim to the Cultural Revolution, or Muslim extremists. Here, professionals, the European or Japanese explorers of the early 20th century, had been at work, and in shows. Instead of smashed up statues and defaced frescos there were hardly any statues at all, the niches were empty, and large parts of the frescoed walls had been removed. Outright theft, of course, in a lawless part of China, at the time, but in retrospect, without this art theft there would have been little left at all from the remarkable Buddhist cave art following the excesses during the Cultural Revolution. It is just that one has to go to London and Berlin to see it.