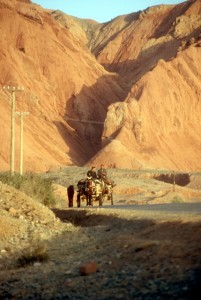 cart in the desert

To a distinctly Chinese town along the Silk Road, and an uncomfortable experience.

When we went to the bus station, to purchase our tickets to Aksu for the next day, we found the ticket counter abandoned. After some investigation, we noticed an uniformed lady, playing cards with the attendants of the refreshments shop, which was therefore also temporarily closed. When I indicated that I wanted to buy tickets, she looked up at me with a face as ‘cannot you see that I am playing cards at the moment’. She was certainly not going to interrupt the game. Finally, after she had finished unhurriedly, she was prepared to attend to our needs, albeit that she tried to sell us the tickets for double the price and that she told us the wrong departure time. We found out about the ticket price on the spot, and after some unpleasant negotiations, followed in detail by the rest of the bus station community, we managed to pay normal price. Unfortunately, we found out about the departure time only the next morning, having missed the bus by half an hour, and it had nothing to do with Beijing time or Xinjiang time. The next bus left some two hours later, and took ten hours to reach Aksu. 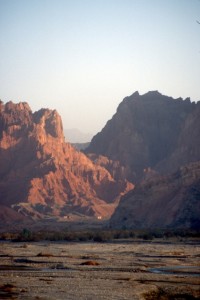 the mountains, the river

Aksu somehow does not belong in Xinjiang. It is a small, but obviously prosperous town, with wide and clean avenues, and taxi’s again as opposed to the donkey carts and motorised tricycles of other towns. Other signs of affluence are that the main vegetable market is inside, in a clean, purpose-built hall, with fans cooling the air, and that there are plenty of restaurants, and relatively few food stalls outside. The town is Chinese, not Uygur at all, and the bonus was that we finally had some good food again, a welcome change from the noodles with sheep fat, or the kebabs of mutton. Although Xinjiang is an exiting area to travel in, the Uygur food is really not the best in the world, and becomes quite monotonous, after a while. 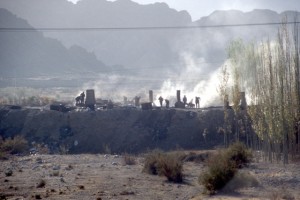 brick making in the desert 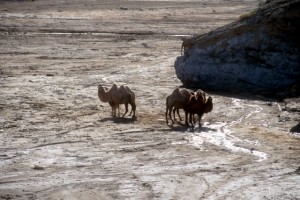 wild camels roaming the desert (or so we were told..)

As we did not fancy further driving along the Northern Silk Route, given the poor road conditions, we decided to fly to Hotan, a town on the Southern Silk Route. The problem with Aksu is that there is absolutely nothing to do or to see. To kill time, we played some pool billiards on a little square, and quickly assembled a crowd of at least 40 around the table, who wanted to see how foreign devils played the game. They must have been disappointed. 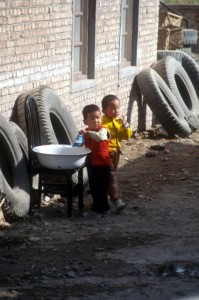 The afternoon we stayed in the hotel, reading, when we were suddenly visited by two men of uncertain background, who blurted into the room with the floor attendant. They obviously had not expected us, because the floor attendant carried a set of keys, and the time between the knock on the door and the opening of the door was very short indeed. They saved their day by asking for our passports, although they cannot really have been interested in our passports, and their meticulously copying all the details seemed silly given the fact that the hotel receptionist had done the same when we checked in the evening before. What they were interested in remained unclear, all our questions to who they were and what they wanted were, very Chinese, politely avoided. Secret Service or Public Security Bureau, checking on foreigners? And how often had that happened before, during our trip?