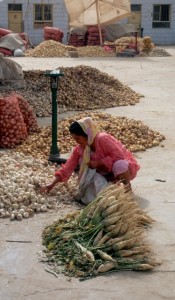 garlic in the Hotan market

A visit to a silk factory and more ancient ruins, in an overall tense atmosphere. 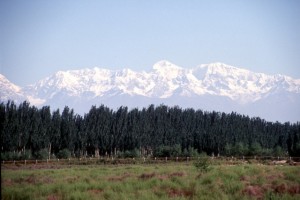 We flew out of Aksu the next morning, in bright sunshine, which allowed us a view of the magnificent, snow-capped mountains to the west, towards the border with Kazachstan. But the weather in Hotan was miserable, overcast, it even rained, an unusual prospect in the desert. Hotan is the centre of jade, silk and Chinese carpets. To visit a silk factory, outside town, we took a local bus. We got off right in front of the factory, and walked through a gate without being stopped, then into poorly lit factory halls, where we inspected the noisy spinning and weaving machines, and to further buildings on the factory premises, still without being stopped. A Chinese factory is an entirely self-contained unit, providing housing, sports facilities, canteens and everything else for its workers. Large sign boards announce safety measures, production records, and the employee of the month, or something like that. All in Chinese and Arabic script, Arabic being used for the Uygur language, but with sufficient pictures for us to get the gist of it. Only after half an hour, or so, we were approached by a ‘guide’, one of the employees who spoke English and showered us immediately with her entire vocabulary: ‘how do you do?’. With a mixture of Chinese and Turkish, a language close to Uygur, we then managed to maintain some sort of conversation, which, of course, inevitably ended up in the factory shop. 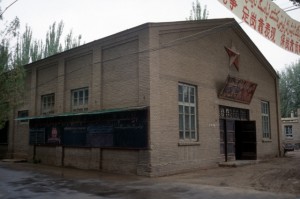 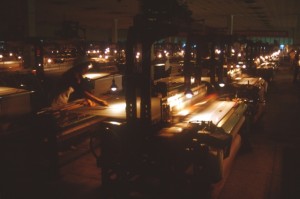 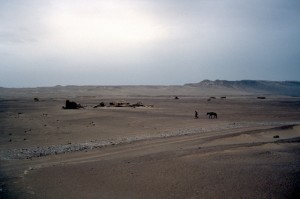 not much left of the ruined city here 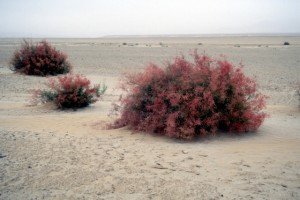 Apart from another ancient city, very ancient judging from the scant remains, there is little else in Hotan. The town itself is small, with an attractive bazaar and a pleasant food market. Police were patrolling in threesomes, and all armed with semi-automatic machine guns, and there was quite some military display, on occasion, when trucks with 20 or 30 heavily armed soldiers would drive through town, something we had not seen anywhere else. Only later we learned that a few days before our arrival a bomb had gone off in the town, planted by the Uygur independence movement. No details, everybody was very tight-lipped. Little is known in the outside world about this conflict, which only in 1996 or 1997 reached headlines, when terrorists planted bombs on buses in Beijing and Urumchi. 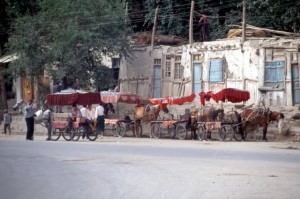