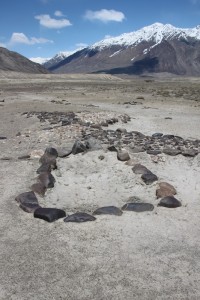 mysterious geoglyphs on a valley floor in the High Pamirs

In search of ancient geoglyphs in the High Pamirs, we also encounter the elusive Marco Polo sheep, and a meteorite crater in between the high plateau river valleys and snow-capped mountains

A short distance from Karakul Soviet archeologists have found a number of strange rock patterns on a valley floor, and called them geoglyphs. Never heard of, so we had to go and see this. 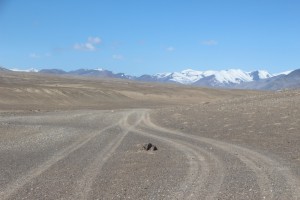 the gravel valley that constitutes the road

‘A short distance’ in the Pamirs is not necessarily the same as ‘nearby’. Just after Karakul, we turned off the Pamir Highway, onto a dirt track across a gravel valley. And we kept on driving on a dirt track, or sometimes no discernible track at all, for the next two-and-a-half hours. Once again, incredible landscape, a desert at 4000 m, with so much wind that all the sand has blown away long ago, and what is left are extensive plains of gravel in between mountain ridges that have a bit of snow; but not even that much, because precipitation is really low here. Total nothingness, it seems, kilometre after kilometre gravel, nothing else than gravel. And grey, brownish, occasionally even some reddish or greenish rocks, some eroded in soft, round forms, some sticking out high as hard, reluctant blocks of stone. And always more, higher ridges behind, at least part snow covered. 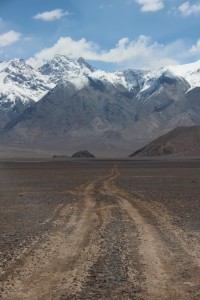 another view of the road, in the middle of nowhere 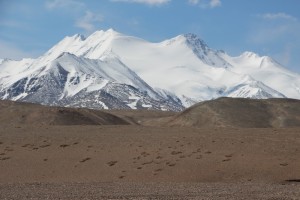 snowy peaks all around 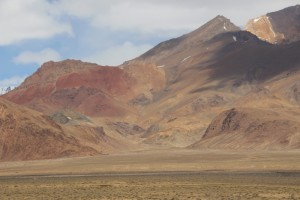 the only colour comes from the mountains themselves 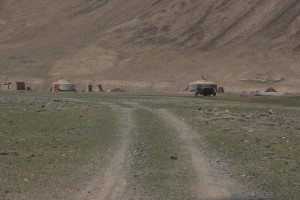 a group of yurts and yaks, ready for the summer

The only life around seems to be the occasional small bird, and the numerous marmots that, upon hearing the car, spurt to one of their many holes and disappear from view. But surely, nothing else can survive here. But then we see a man, in the complete middle of nowhere, Kyrgyz traditional hat on is head, sitting, yeah, by the side of the valley, on a piece of rock. A little further we see some yak grazing, and then we encounter a hut and a tent. A family from Karakul that has just moved, last week, to the summer pastures. Pastures? Well, it turns out that there is some minimal grass growing, in between all this gravel, good enough for the yaks. Further on, much further on, not having seen anything moving for a long time, we come across a broken down van- not moving either -, another group of people going to summer pastures. Incredible, really, these people are going to be out here, all alone, for four or five months, to graze their yaks. 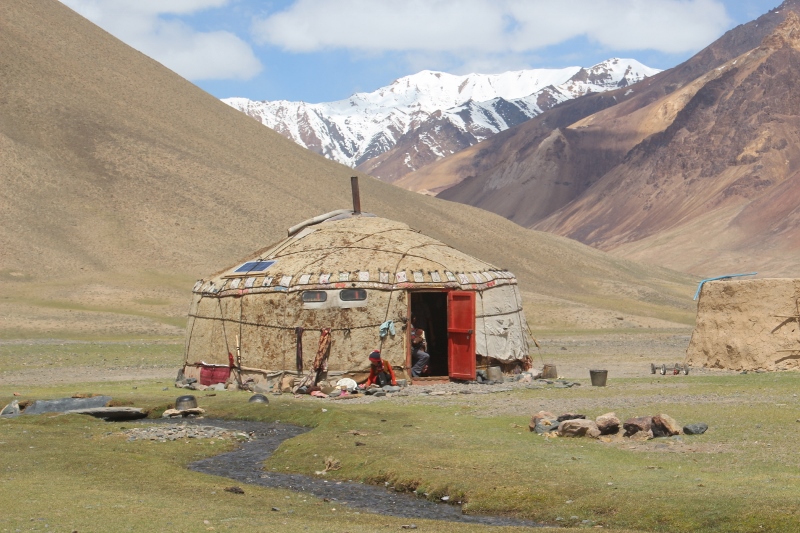 another idyllic picture that looks nicer than reality is, probably 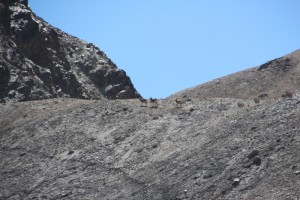 The other life we encounter are two groups of Marco Polo sheep, the world’s largest sheep, indigenous to Tajikistan. They are an endangered species, I believe, still, their numbers are dwindling due to rich hunters, who pay something like US$ 35,000 for a permit, plus 30,000 per hunted sheep; and due to the local people killing them for their supposedly tasty meat (whether I would find it tasty, too, I am not sure). So it is totally understandable that the sheep, upon hearing the car, ran onto the steep slopes, somehow perfectly matching their colours,; but we did get a few good pic’s, and spotting animals is always exciting. 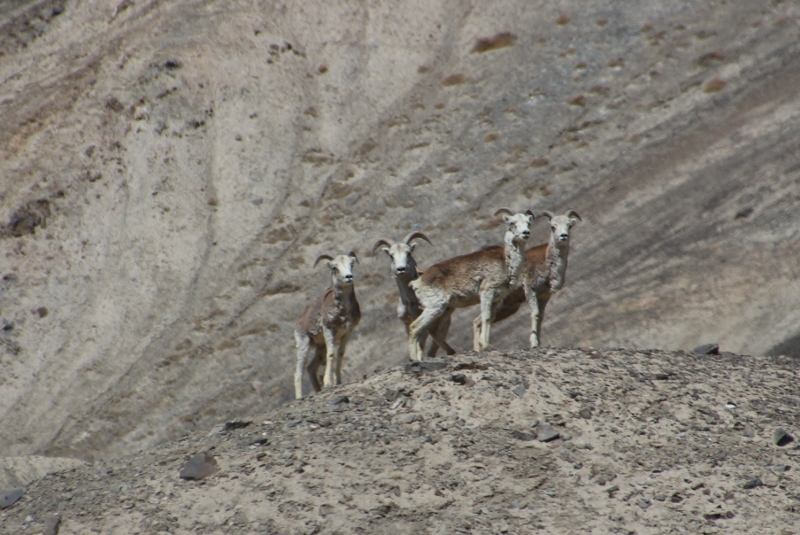 another group of Marco Polo sheep, paitently waiting for the camera 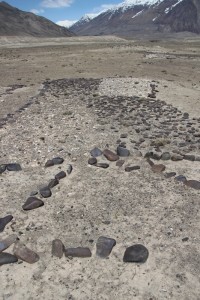 geoglyphs on the valley floor 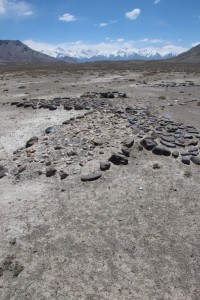 note the shape, and the white and black fields 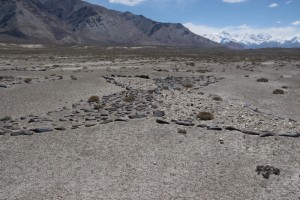 another nice example of geoglyphs 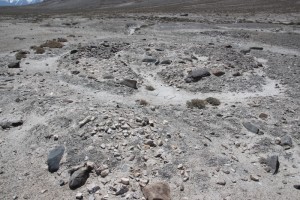 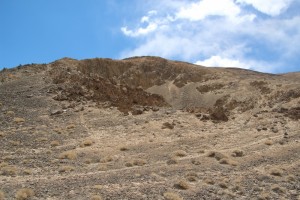 a meteorite crater, the biggest one of several in this valley

Finally we reach the geoglyphs. On the valley floor, the same gravel-like floor we have seen all along, several patterns have been constructed, clearly man-made, and filled in with black and white stones. The black stuff comes from here, but the white pebbles must have been carried from elsewhere – not necessarily far away, but still, an extra effort. And so must have been the large green stone, sort of altar. The patterns vary a bit, some are elongated, others star-like, maybe 2-3 meters wide and 5-8 meters long, that order of magnitude. Some have extra niches on one end. In addition, in two different places we find a series of circles around each other, also clearly man-made. It is rather unclear what they represent. The circles could be burial mounds, but the geoglyphs, anybody’s guess. Some suggest a lunar calendar, others see similarities with the lines in the Atacama Desert in Chili. How old? Perhaps Saka, which is also called Scythian, maybe 5th C BC? Probably also anybody guess.