Crossing from Chile to Peru, from Arica to Tacna, is a piece of cake, really, as long as you have the right transport.

After a good five weeks in Chile it is time to move on. Tacna, just across the border from Arica, is only 40 km away. And there is a train connection! I love traveling by train, so we go to the station a day in advance, as prescribed, at a time the station is open, as advertised, only to find everything closed. Nobody there, nobody to explain why; no notice on the gate, no information. A mobile telephone number, that is not being answered. And we are not the only ones wondering, several Chileans also have turned up. Several people claim that the tracks have been damaged in the floods earlier this month, and train services have been suspended. It is only later that we learn that there are only 48 seats on the train, and when they have been sold, there is no reason for the station to stay open any longer, until the train leaves the next morning. 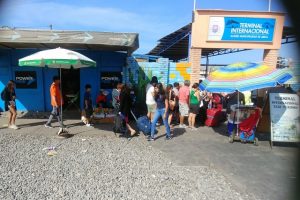 the queues at the Arica international terminal for buses and taxis, exclusively serving Tacna

The other options are collectivos – shared taxi -, or bus. Both leave from the same terminal, and for both enormous queues have formed. “Just after the carnival”, I thought, but no, this is always the same, from early morning to late evening. Collectivos have the reputation to stuff not just four, but five, or even six people in a car – and we are not particularly small ourselves -, so we opt for the bus. Despite the long queue, we are inside one of them within 15-20 minutes, all goes pretty quickly, and pretty efficiently. A little uncomfortable is that we have to hand over our passport to a guy, who subsequently disappears. But everybody else did the same, and nobody seems worried. Luckily, at the last moment he does join the bus, too. 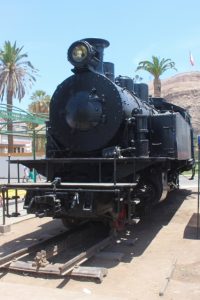 a steam engine that is going nowhere anymore, in Tacna

Fifteen minutes’ drive to the border, then one-and-a-half hours wait – it is total chaos, hundreds of cars lined up, and quite a few buses, too. But finally it is our turn, we get our passport back again, and move in no time through passport control and customs. On to Tacna, altogether not too bad.

The good news is that it is no less than two hours earlier in Peru. How they manage whilst moving from south to north, it beats me, but we suddenly have a lot of time extra, necessary for our onwards travel to Arequipa, as we have no intention to stay in Tacna.

The bad news is that there is a trucker strike in Peru, or just on the road to Arequipa, who knows. There are no buses leaving. Funny thing is that the touts keep on directing people to their bus company’s sales window, and that the various bus companies happily keep on selling tickets, perfectly well knowing that there are no busses leaving. Well, they claim that the strike will be over by 4 pm, but I don’t bet on that.

So we find a hotel in Tacna, and wait. and this is where we would have arrived in Tacna, had we managed to take the train