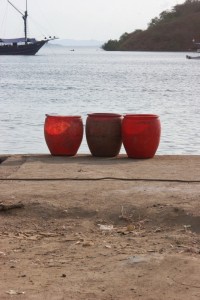 buckets on the quay of Labuanbaju

From Labuanbaju, a small fishing port from which one can visit the Komodo Dragons on Rinca, to the Todo village of the Manggarai and on to Ruteng.

Labuanbaju is a very small, cute little fishing village – I think the population is a mere 7500 – with a disproportionate tourist industry, now sadly suffering because of Indonesia’s declining popularity as a tourist destination. Even four years after the Bali bombs, the issue is still on everybody’s lips. Sadly for Indonesia, that is; I actually appreciate a scarcity of tourist. 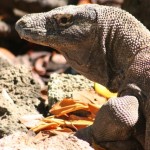 Labuanbaju’s fame is mostly derived from its proximity to Komodo Island, four hours by boat and home to the world’s largest lizards, the up to 3 m long prehistoric-looking Komodo dragons. Another, smaller island that also has these monsters is Rinca, only two hours away and also part of the Komodo National Park, so that was what I was heading for the very next day.

After an early start and a noisy boat ride we got to Rinca, and yes, indeed, right next to the jetty, the first Komodo dragon: it looked like it was tied there, or glued rather, motionless, so as not to disappoint the tourists. But later in the day, when we headed back, he had in fact moved. Around the camp, about five minutes walk from the jetty, were more dragons, some very large – male, apparently, and very lazy – and some smaller ones, including several young animals. In the past tourists would buy whole goats that were fed to the animals, but this was discontinued some years ago because of fear that they  would become too dependant on feeding: the concentration around the kitchen of the ranger’s camp suggests that that stage has in fact been reached. But they are indeed amazing animals, ugly, moving awkwardly. Males get up to 3 meters long, females are smaller, but ever so menacing. Only the young ones showed any inclination to move, for the others it was already too hot. 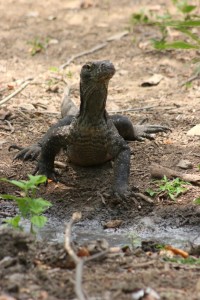 another dragon, curious about the visitor… 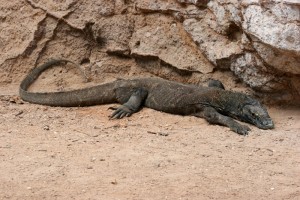 the first Komodo Dragon, near the jetty of Rinca 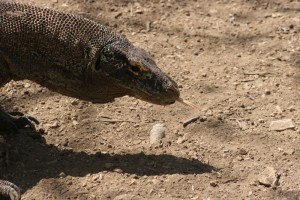 the split tongue of the dragon contains the poison

The walk around the island was OK, nice to be outside but nothing spectacular. We came across another few dragons, one stretched out across the path, and looking like a log rather than an animal; our guide almost stepped on top of him, but spotted the danger at the last moment, and walked respectfully around. The animals have some sort of poisonous bacteria in their teeth that cause a slow and very painful death once bitten, and they do bite given the chance – the guides walking around with forked sticks must have a reason to do so. For the rest the wildlife was pretty unimpressive, some monkeys, the odd wild water buffalo, and a wild pig. The rest of the game, neither the scenery, are worth the trip, it is really the dragons that one comes to see here. 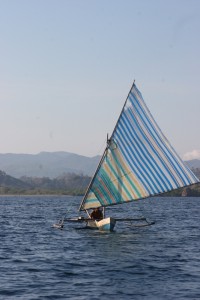 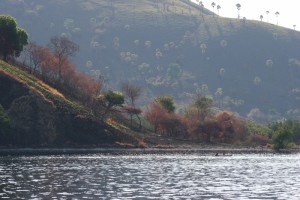 the coast of one of the islands between Labuanbaju and Rinca

On the way back we stopped off at another island, for some snorkeling, which is as amazing, of course. Here much more fish, much more variety, than in Haiti – my previous snorkeling experience -, and bigger ones too. Never mind that I hurt myself badly trying to climb back in the boat, and going through all of the rungs of the feeble wooden ladder, right back into the water again. I suppose Indonesian ladders are not built for sturdy Westerners. 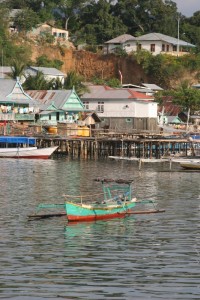 boats in front of the Labuanbaju jetty 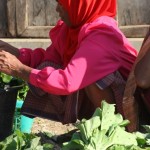 Back in Labuanbaju, late afternoon, I wandered through the village a little more, all the way to the back where the fishing boats are moored, truly incredible vessels, sort of huge outrigger canoes, with shorts masts. The other conspicuous form of transport is the motorbike, much like the rest of Indonesia. They dominate traffic, zigzag in between people and cars at will, frequently put their lives at risk, confident of the application of Indonesia’s two traffic rules, #1 if a car hits a motorbike the car pays, and #2 if a motorbike hits a car, the car also pays. Some of the bikes – sometimes it seems all of them – also serve as motor taxis, or becaks in the local language. At least in Aceh one has the comfort of a side car, but not here, just sit on the back, and better hold tight. No, then the bemos, the mini-busses, are a much more convenient way of transport. Every other car seems to be a bemo, a 10-seater that habitually seats 20, and crosses the streets apparently at random, without patterns – although rumour has it that there are in fact standard routes that some of them follow; the one I took happily detoured to drop me at my hotel, and then turned around again, and all of that for 1000 Rupiahs only, equivalent to 10 cents. The only drawback is that after eight in the evening they have all gone off, so I still needed to walk back to my hotel after dinner, uphill, with all the artefacts I had so savagely negotiated for in the only tourist shop. 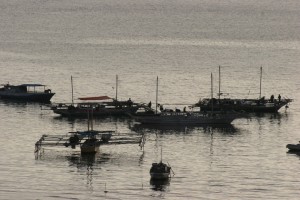 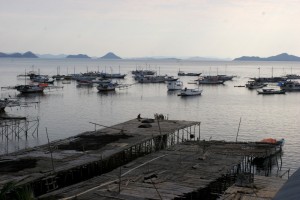 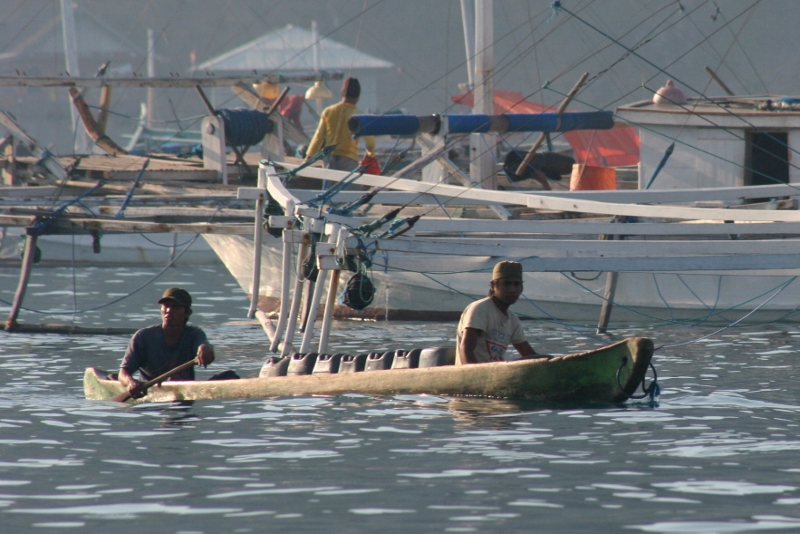 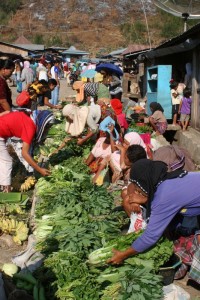 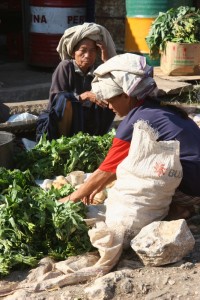 market women and their ware 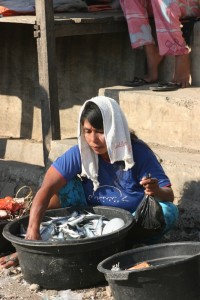 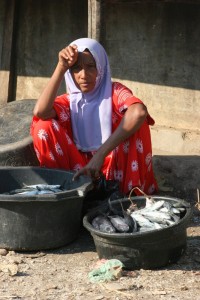 For the six day trip overland, or rather, over-island, to Maumere, where I would catch the plane home again, I had rented a car, Kijiang Innova, nice vehicle, locally made Toyota. But sure enough, the morning of departure I was told that the there was actually another car, “also Kijiang, also Kijiang!!”, with another driver than initially agreed, but much older – the car, not the driver – and much smaller: another Kijiang all right, but another model all together. First driver’s father had fallen ill last night, and he had to be brought to the hospital. When I suggested we call off the deal, and I’ll find another car elsewhere in town, it was instantly agreed that we would get back to the original arrangement, and that the second driver would take papi to hospital instead. In the event, my driver, Ivan, a cute little guy, at least on the surface, stopped briefly at his parent’s house on the way out, and his father came to wave goodbye, looking remarkably healthy for a guy who had to go to hospital urgently.

Just outside town we stopped at the local market, a very lively and colourful event, and I couldn’t help it, I had to get out and walk around.  I love markets! The journey to Ruteng, the next town, 140 km inland, was a pleasant drive on a good tarmac road that occasionally deteriorated into potholes, gently – and sometimes less so -, winding through forested mountains. Every time we hit a pothole, Ivan would say “au”, as if it hurt him personally. At the site of road repairs, in our case the construction of a new bridge, workers had left a pile of rocks in the middle of the road, rather conspicuously. And indeed, two of them were so kind to remove the stones for us to pass – and no doubt put them back straight away after we had gone – for a few cigarettes. 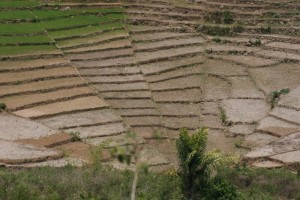 after the harvest, the padis are dry, still circular, though 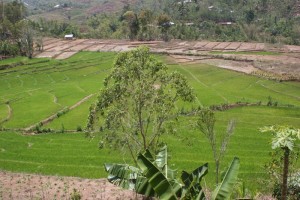 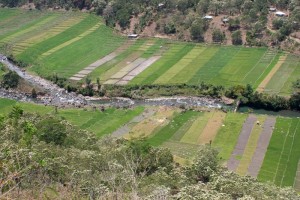 the small stream comes handy for irrigation of padis

Occasionally the forest retreated and provided views of the distant mountains, and wherever there was some space, the land was cultivated, mostly rice padis – ‘sawah’ – in vibrant green, although with the harvest past, many also lay dry, brown terraces waiting for the November rains to be reactivated again. Photogenic, for sure!. The local culture here is based on circular patters, sometimes still reflected in the padis, which are laid out in the form of a spiderweb, with each of the slices belonging to one specific clan. 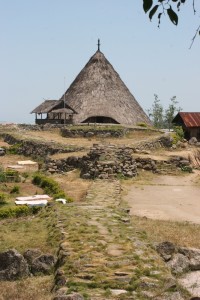 the Rumah Adat in Todo village 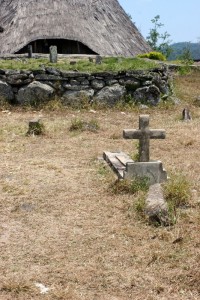 Christanity next to animist beliefs 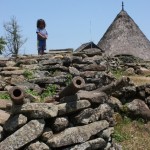 A detour brought us from the main road on a much smaller, and much more potholed, track to Todo, one of the traditional villages of the Manggarai hill people. ‘Traditional’, in this case, means a village with a Rumah Adat, a traditional house, where ancestors are being worshipped, and a few megaliths, ceremonial standing stones representing the graves of past generations. For good measure, there was also a cross installed, you never know, and to complete the lot, a sacred walk-way from the sacred tree to the sacred Rumah Adat was adorned with few ancient canons, allegedly Dutch but in fact made in Liverpool. The Rumah was quite a nice structure, tall, with a high thatched roof and a wood-carved opening, a bit like the Haus Tamborans I have seen in PNG, but more egalitarian: in PNG no women were allowed inside, whilst here there are actually separate halves for men and women. From the mattresses on the floor I suspect that the village actually uses the building as a community center, too. Just as interesting as the Rumah Adat are the other houses, the ones people live in, many of them still made of bamboo woven walls with intricate patterns, very attractive. At the end of the visit I was ushered into a small ‘kantor’ – office – , where I was asked to pay my ‘kontribusie’, a totally random number in Rupiah. I was estimated at 10,000, around US$ 1,-, which was kind of insulting given that tourists have been made to pay up to 50,000, and 20,000 is the going rate. 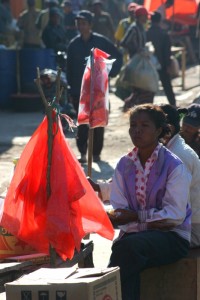 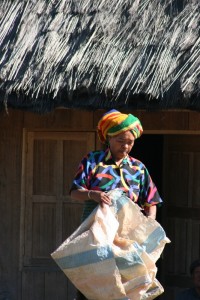 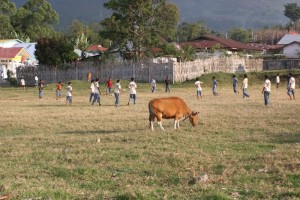 Ruteng itself is nothing special, but is situated at the foot of the 2400 m high Gunang Ranaka, an impressive volcano. Things are much more organized here, with a covered market – where dried fish and Chinese cabbage seems to be the staple – and a football pitch that is shared by playing children and grazing cattle alike. In fact, Ruteng is nicest in the morning, when, from a little hill called Golo Curu one has a spectacular view over the padis surrounding town, and the towering volcano. The dead are offered the same view: the hill is also home to the town’s cemetery. Just outside Ruteng is Gampong Ruteng, a traditional village. The people here are actually more interesting, and photogenic, than the houses.

Cick here for the continuation of this trip. 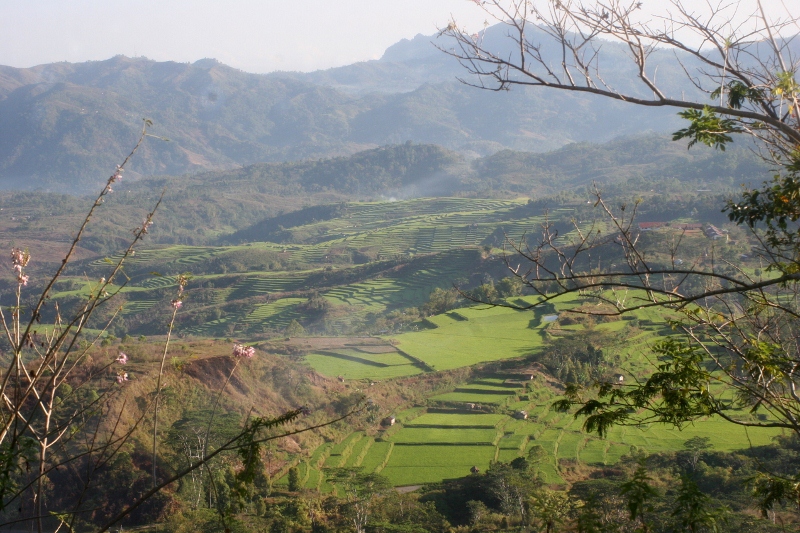