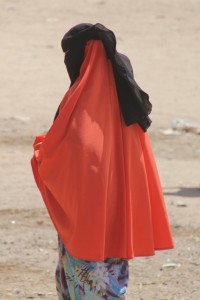 despite being largely a desert country, Somaliland does have its colourful moments

The self-declared independent Republic of Somaliland, a very poor but well-organised country with extremely friendly people, is quite different from the Somalia that so often reaches the newspapers.

The Republic of Somaliland is one of the three parts that officially makes up Somalia, the others being Puntland, and the part that gets so often in the news, the southern part of Somalia (let me call this rump-Somalia). Puntland and rump-Somalia were both previously Italian colonies. Puntland is the pirate paradise, somehow semi-autonomous from the rump-Somalia, thanks to its healthy and ever-growing foreign exchange reserves, and rump-Somalia is now the prototype of a failed state. Somaliland, however, is the former British colony. It was lumped with the rest of Somalia after the Brits left, but then declared its independence from increasingly dysfunctional Somalia in 1991, after a nasty war – every war in this part of the world is nasty, of course. It has since had several apparently fair and honest elections, has its own government and police force, its own central bank, its own currency, and for all intents and purposes operates as an independent country – except that nobody has yet recognized it as such. To visit Somaliland, you need a Somaliland visa, which can be issued in Addis Ababa (and perhaps London and Washington, but that seems less reliable). 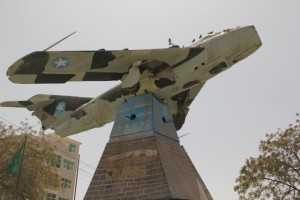 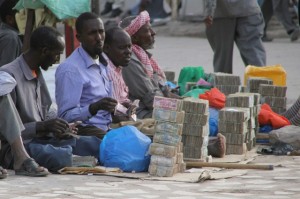 Somalia has its own currency, which is freely traded in the streets 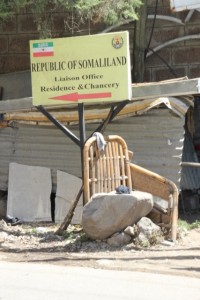 On the way to the Somaliland Embassy in Addis Ababa 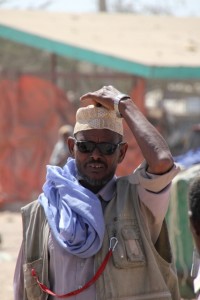 a Somali man at the camel market of Hargeisa

Getting to Somaliland is another thing. According to the information from various travel guides and websites, getting into and out of Somaliland by plane isn’t that straightforward. Ethiopian Airways, the most reliable airline in the region, doesn’t fly to Hargeisa, so one has to settle for any of the other operators, invariably small airlines; adventurous would be the appropriate word, or perhaps wild-west is better.

There is Dallo Airlines, described as “wildly inconsistent”, and they fly between Hargeisa and Djibouti. However, they were shut down some time ago, and fly only 2 to 3 times a week if they fly at all. Another player is Jubbo Airlines, touted as the only one that accepts online bookings – with the proviso that they will only leave when they have sold enough tickets to make it worth their while to fly (but they only tell you this afterwards), so you may be waiting a week or longer, never mind that you have a paid and confirmed ticket for a particular day. Both airlines fly with Russian Ilyushin-18 aircraft of uncertain age. The star performer is African Express, a Kenyan airline, but they don’t go to Addis Ababa, only to places like Mogadishu, or further away Nairobi. Another challenge is that they fly not to Hargeisa, but to Berbera, three hours drive from Hargeisa.

Overland is another option. There is the Djibouti route, described as “a stenuous 20 hour journey on a gravel road” in a shared taxi, usually a four-wheel drive, which leaves at the end of the afternoon from Djibouti to drive at night, and so avoid the worst heat of the day. Not attractive. Or one can get in from Jijiga, the nearest Ethiopian town, with an airport served by Ethiopian Airways, and 2 hours drive from the bordertown of Wajaale, from where it is another 2.5 hours by shared taxi, very uncomfortable, to Hargeisa. We judged this the least bad option.

And so we got to Hargeisa, would-be capital of the Republic of Somaliland. 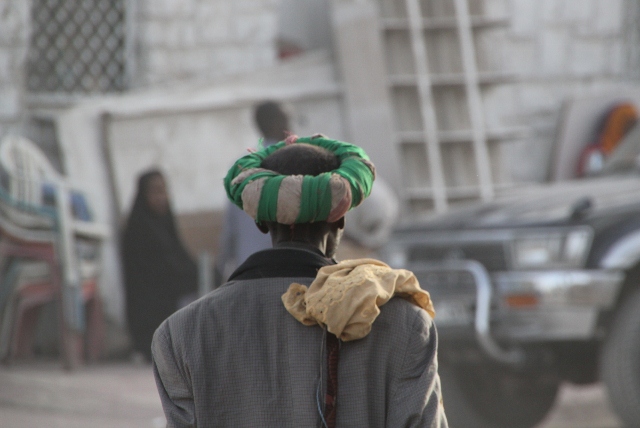 Somali herdsman, not entirely fitting in the Hargeisa street scene