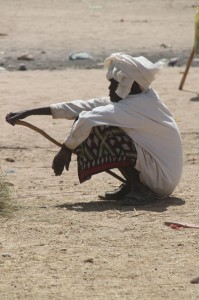 Camel seller at the cattle market of Hargeisa

Unpretentious would-be capital of the country with the friendliest people ever.

There are few entries into a capital city – even would-be capital city – more depressive than the entry into Hargeisa. The approach is by way of a couple of hours in a shared taxi on a pot-holed road through desert country. The only thing that announces the city is the increasing amount of rubbish along the road: plastic bags, bottles, scraps of paper, everywhere on the ground, and thanks to the wind also in all the shrubs and every tree, however rare. In the distance some houses appear, initially mostly of the mud and corrugated iron type, and before we realized it, we were in the town centre, if that is the appropriate terminology for a couple of two-story buildings that makes up the business center of Hargeisa. 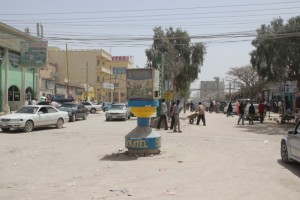 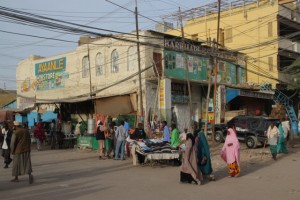 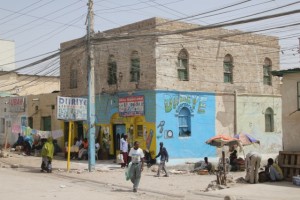 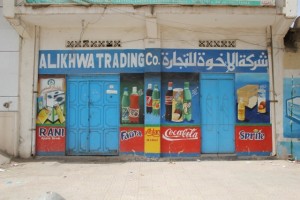 Shop in Hargeisa advertising its products

And yet, however depressive Hargeisa may look upon entry – and in fact, however depressive Hargeisa may look, full stop -, much is being compensated by the people here. Granted, our immediate comparison is Ethiopia, and we have not been wholeheartedly impressed by the Ethiopians in general, but even without this, Somalilanders must rank towards the top in the list of most friendly, genuine people.

We booked ourselves in the Oriental Hotel – not as flashy, perhaps, as its famous Bangkok namesake, but by all means a very comfortable place, with extremely nice and helpful staff. And it is not that they have tourists here every day. A stroll through downtown Hargeisa has scores of people, men and women, coming out to greet us, ask us how we are, where we are from (many know Holland, have family in Holland), and then welcome us into Somaliland. Genuinely welcome us, want us to feel at ease. There is nothing like the opportunistic approaches that we constantly experienced in Ethiopia. Nobody asks for money. 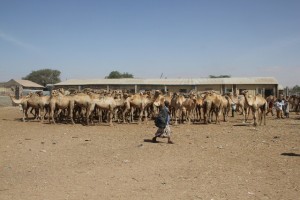 The camel market in Hargeisa

On the contrary, when I find a local bus to go to the camel and goat market, outside town, one of the passengers pays for my fare, and no protestations from my side can change that. By the time we reach the market – 20 minutes later, that is what it took to progress the 2 kms, and not because of the traffic, but because every 50 meters somebody needs to get out or get in, and nobody is really in a hurry – by the time we reach the market, one of the passengers comes with me to make sure I find the place, 200 meters down a side street. 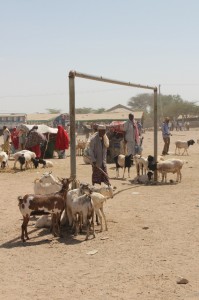 The goal posts of the football pitch come in handy 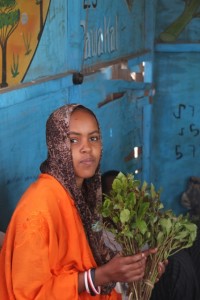 Young woman in the chat business

The market ground is actually also the football pitch, but used in the mornings for trading camels and goats. Goal posts come in handy. It is not very busy, today, perhaps some 60-80 camels, with the name of their owner written on their hump, and a few hundred goats, in small groups. Sellers cramp under a parasol, awaiting potential buyers. Everything moves very slowly, nothing spectacular, but it is fun to absorb the atmosphere. And fun to talk to everybody who approaches me, once again out of curiosity, never with any opportunistic intention – or it must be that they want their picture taken, too. 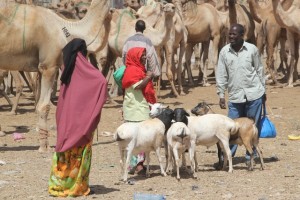 not only camels are being traded, in the market 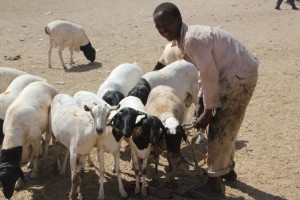 the young take responsibility for the goats 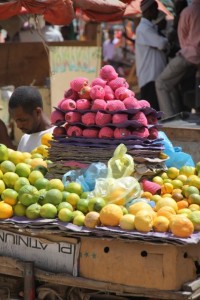 oranges in the market 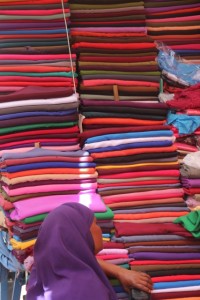 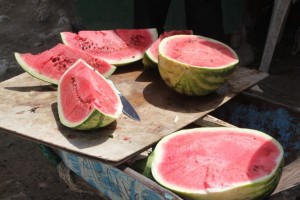 Water melons in the market of Hargeisa

In town, there is nothing really. Few of the streets are tarmac, some others are covered with irregular cobbles, most are just dirt roads, and in any case there is sand and dust everywhere. Many buildings still show traces of the 1991 war of independence from Somalia proper, some have been shot to pieces. The things to see are the mosque, not very special, and the war monument, a Russian MIG fighter aircraft. Also not very special, really. But it doesn’t stink in town, no pee smell, no human excrements in street corners. No smell of rotting fruit in the humble market (which in any case is dominated by non-food items, shoes and cloths, and mattresses, especially). The relatively few cars and buses nevertheless manage to produce a chaos, not helped by the people pushing wheel barrows – the preferred way of transporting goods, and sometimes the elderly. But the best is the complete traffic jam after lunch, in the street where chat is being sold. Every self-respecting Somali climbs in his four-wheel drive (or 20-year-old Toyota station wagon, or just walks) to get to chat-street and get his portion of fresh chat to get through the afternoon. In effect, this country only works half-days, in the morning. In the afternoon the nation resolves to chewing chat, a narcotic providing this pleasant stoned feeling that ensures that you don’t do anything anymore for the rest of the day. 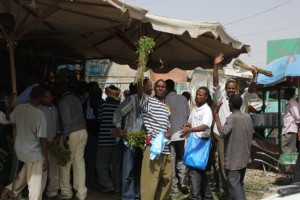 Another feature of this town is the money people. Everywhere, on every corner, you’ll find a few, sometimes up to ten, money changers, with enormous stacks of bank notes in front of them, really, bales of 500 and 1000 shilling notes (8 and 16 $cents, respectively, the largest denomination notes in the country, I think). Some have flimsy metal cages in which they keep the money, many don’t and have the bales just in front of them, on the pavement. Nobody seems concerned about crooks trying to steal any of it. And that in a country that is obviously still pretty poor. Dignity trumps poverty, here. Hargeisa, and Somaliland, is a wonderful place.

next: the rock paintings of Las Geel 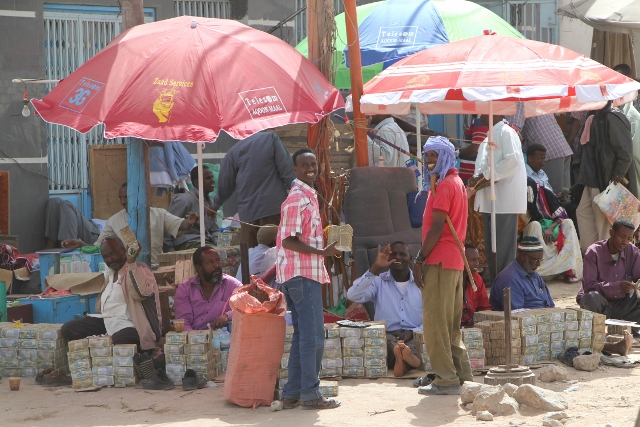 Money changers in the streets of Hargeisa