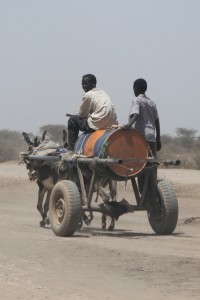 A most efficient border crossing halfway between Jijiga in Ethiopia and Hargeisa in Somaliland.

The small town of Wajaale is the border crossing between Ethiopia and Somaliland. A surprisingly easy crossing if you have all your documentation in order.

Our trip started quite well, in Jijiga. We got the last seats in the bus, or that is what I thought, and then they managed to fit another 8 people in, too. Jam-packed almost exclusively with women – I suppose they make the better smugglers, why else would anybody go to Wajaale? – we finally left Jijiga half an hour later. Fill a bus with men, and nobody talks. Fill a bus with women, and you have constant chatter, all the way from Jijiga to Wajaale. Good fun, though, never mind that we were all squeezed on top of each other.

The country side becomes more and more desolate, the only thing left outside is sand, some yellow grass, low shrubs and the occasional acacia tree. And small round huts, as far as I could see semi-permanently arranged in communities of 10-20 huts, surrounded by cactuses and thin aloe trees, the type that has very small branches and even smaller leaves – and thus provides no shade, whatsoever. I think this is the most impressive realization, driving through this region. There is simply no shade, yet, there is a lot of sun, and it is getting pretty hot, already early in the morning. 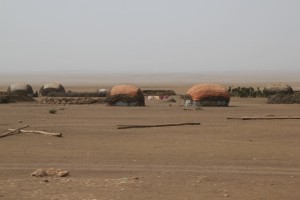 huts on the way to Wajaale 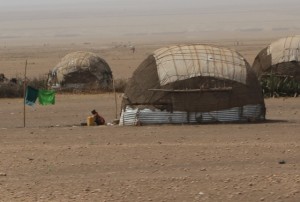 and more huts, with corrugated iron-walls 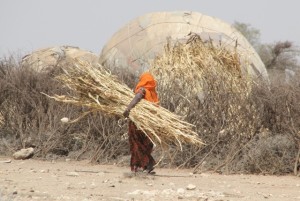 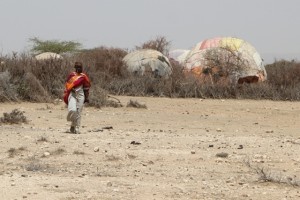 a hut just across the border, in Somaliland 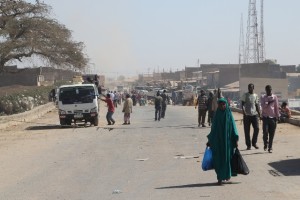 the border at Wajaale – a rope

Just before Wajaale we encountered a road block, a rope across the street, no more. No uniforms, nothing to indicate that this was official, yet everybody got out, and a guy in a Barcelona football shirt searched the bus. Passports were checked, and everybody got back in – except that we now no longer fitted, so even more people were standing next to the door, which didn’t close anymore. With open door we drove into Wajaale, disembarked from the bus, employed one of the porters – there were lots of them, equipped with wheel barrows, very efficient on the dirt road – and made our way to customs. The shed on the Ethiopian side looked distinctly unpromising, yet inside there were computers, passport scanners, cameras and fingerprint machines, friendly customs officers who immediately distributed evaluation forms on how we thought they were doing, then switched on the AC to ensure the evaluation would turn out positive, in short, excellent. In Somaliland same story, except for the forms and the scanners, and five minutes later we were in the self-proclaimed independent state of Somaliland. 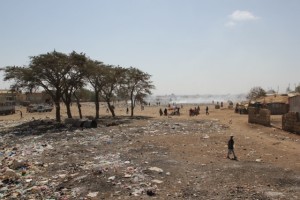 Next, we needed to find transport to Hargeisa, some 90 km further on. No busses, here, no minivans either. Shared taxis, in the form of 20 year old Toyota station-wagons, that is the only thing available. Two people in the passenger seat, four in the back seats, and at least two, plus any children, all the way to the back, in the luggage compartment – luggage itself goes on the top, needless to say. I don’t think we ever had a more uncomfortable way of transport than this one, and that for 2.5 hours. First, with the car finally full, stop at the fuel station, and fill up, thanks to my contribution to the journey. Then, stop to put some air in the tires, clearly a routine necessary before every trip. After all of this, 500 meters on, first road block, another rope. 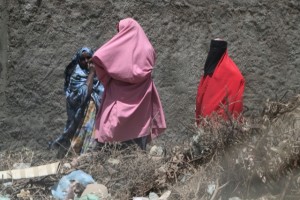 the women in Wajaala, the only source of colour in town

The windows of our Toyota were opened and closed using a wrench; a screw driver in the ignition contact was used to start the engine – and switch off again -, a process that was frequently repeated because of the five more road blocks we encountered on the way to Hargeisa. At each of those we needed to show our passports again, and the later it got, the more time-consuming this process became: each time police officers, increasingly stoned from chewing chat, had more difficulty finding our visa in our passports, and once I even had to explain why we hadn’t received an exit stamp yet (really).

The first half hour outside Wajaale we drove through the fields and on a network of sandy tracks alongside the road; the road itself was obviously too bad to use. Then we hit the tarmac, and things got slightly better. Our driver was good at avoiding pot holes if he was not on his mobile phone; he was on his mobile phone a lot. All the way to Hargeisa.

All together, despite some discomfort on the Wajaale-Hargeisa section this is not an undoable journey, if you are in for some adventure. And hé, if it would have been any easier, everybody else would be going to Somaliland, too. 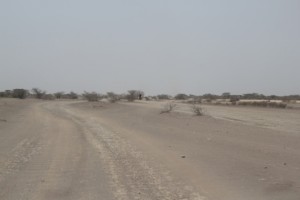 the main road to Hargeisa, or at least the part that is being used 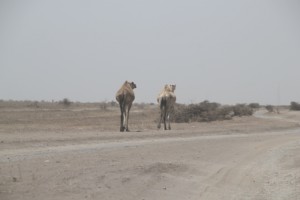 used by wandering camels, too