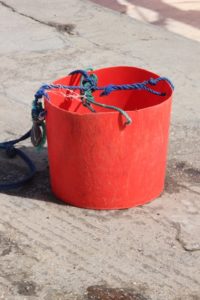 bucket in the port of Mirbat, along the coastal road

The Coastal Road from Ad Duqm to Salalah passes through much less inhabited country, safe the occasional fishing village and camel herd.

(click here for the first part of this journey)

Having rested in a comfortable environment, and fed on several buffets, we continued our journey the next day. The wind was marginally less ferocious than the day before: our car was not being sand-blasted anymore, but everywhere was still a lot of dust in the air, and where sand was available, it blew across the road, dramatically reducing visibility. For much of the journey, there was no sand available, we crossed a desolate, empty gravel plain. One of those areas where you wouldn’t expect anything. Wrong. Even here the occasional camel would be nibbling on the sparse vegetation of low, flat acacia-type trees. 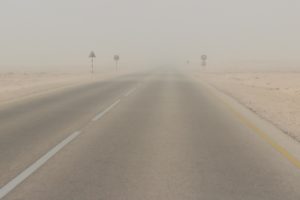 reduced visibility in the storm

We keep on trying, so we turn off the main road, to Ras Madrakah, which has a lovely beach. Except that it was not much more than 14 oC outside, and not very inviting. Especially walking back to the car was a struggle, against the fiery storm. Another side excursion leads to Al Kalil, known for its pink lagoons with flamingos. Today, the lagoons were far from pink, and the flamingos had long gone. 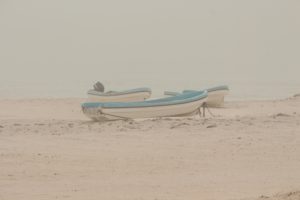 some boats on the beach of Ras Madrakah 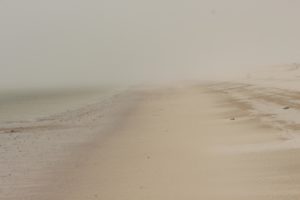 and the beach, not the most attractive with this weather

Just past Al Lakbi, we find lots of fishing sloops on the beach, and an impressive fleet of bigger dhows moored offshore, presumably linked to the small fishing port of Sawqrah. From here we turn a little inland, and up, to a plateau, again pretty featureless, except for the town with the impressive name of Shalim Wa Juzor Al Hallaniyyat, where we manage to find fuel. And then the road drops back to the coast again, close to sea level, at Ash Shuwaymiyyah, almost as featureless as the plateau. We had hoped to find a hotel here. Idle hope. But the weather was improving somewhat, with less wind, so the idea of camping receiving new life again. 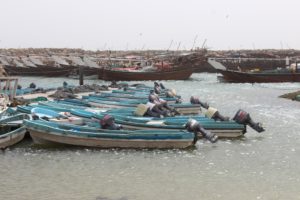 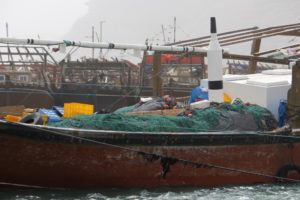 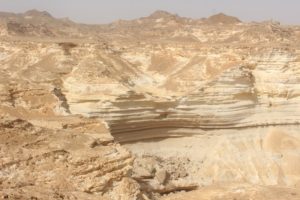 spectacular mountain side near Faghanah

Perhaps the prettiest part of the road came halfway to Hasik, where we descended another plateau, from where we got beautiful views of the almost white rocks in which steep canyons had been cut, a bit like earlier in the Hajar Mountains. By the time we came down to sea level, much of the rock was towering above us, as sheer vertical cliffs, very impressive. In one of the wadis that were cut into the rocks a large herd of camels was drinking, kept together by a herdsman in a Toyota pickup. He frantically drove around the herd, blowing his horn, to get them to turn around in another direction. Modern ways have been introduced here, too. herd of camels in wadi near the coast 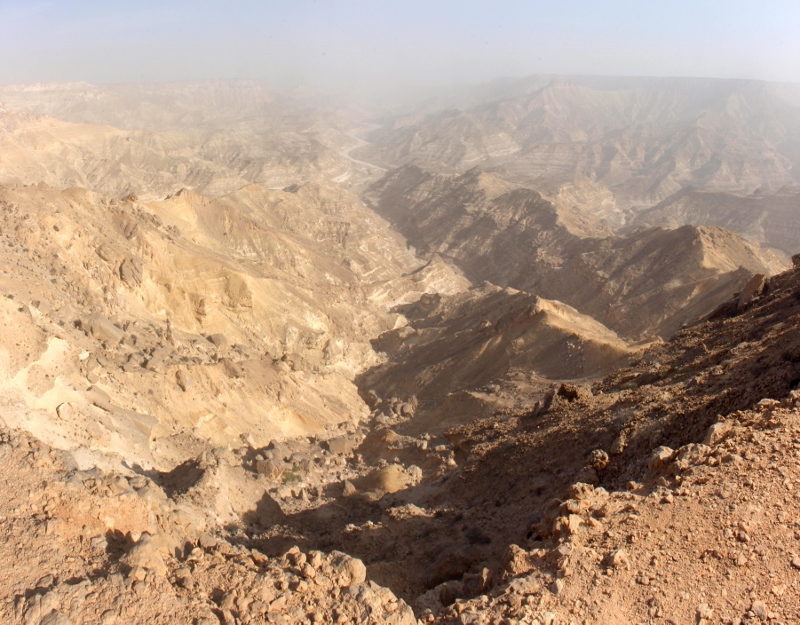 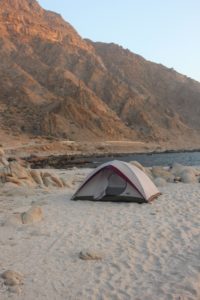 our tent on the beach 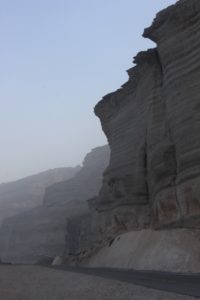 towering cliffs protect us from the wind, somewhat 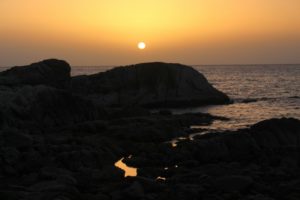 sunrise from the tent

Hasik itself is another village that has been transformed by uniform residential projects as we had seen all along the way; lots of compounds with new houses, many not yet finished, not yet inhabited. Not sure what the point is, perhaps a further attempt to get the Bedouin to settle? Like any other village along the coast, here again the sloops have been pulled up on the beach, and the dhows moored offshore, now bathing in sun light. Also, like any other village, there is no hotel.

Just past Hasik we pitch our tent, on a sandy patch along the coast, a little off the road. Camping is popular in Oman, and wild camping is no problem; it seems that the government even encourages it. Some of the sand here is full of shell fragments, but another part is distinctly lighter coloured, devoid of shells, and looks much like it has been deposited here by a truck, not by the sea. 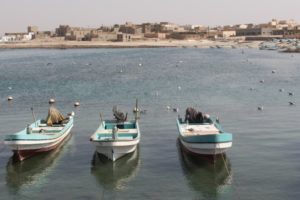 fishing boats, with Mirbat village in the back 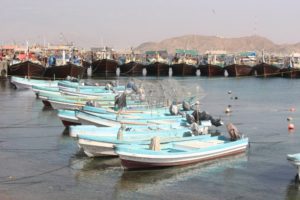 more boats, and dhows, in Mirbat 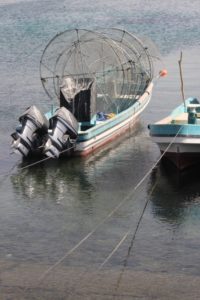 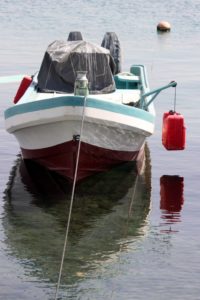 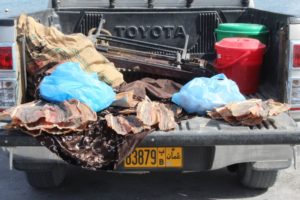 dried fish for sale from the back of a truck

Early next morning we continue our drive; it turns out that our secluded, isolated camping spot is some 500 m from the hamlet of Hadbin, just around the corner. No facilities, though, so we drive on to Mirbat for breakfast, in another totally new development, just two months open. The town is known for its old merchant houses, and nice wooden latticed windows, but the fishing port here is equally, if not more enticing, the sloops on one side and the dhows lined up on the other. There is still quite a lot of wind. Fishermen are mending nets and traps, and doing other maintenance; I don’t think many will go off to sea today. 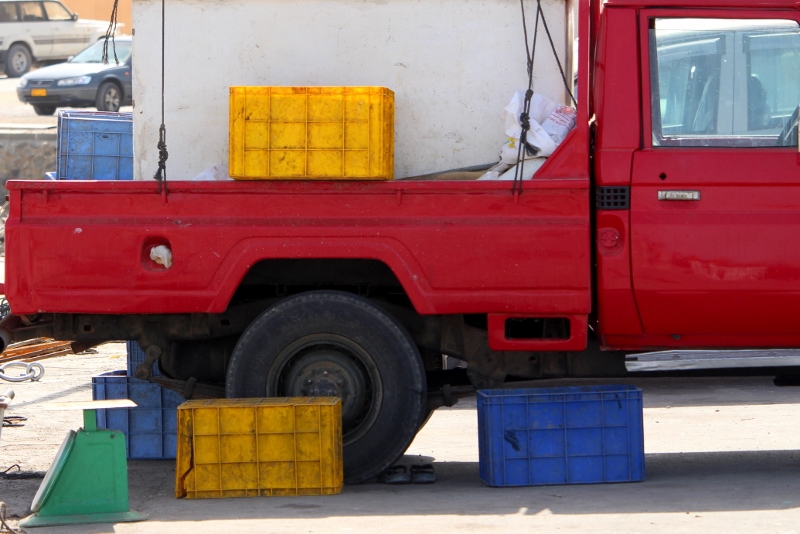 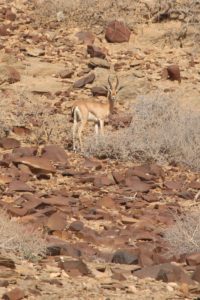 deer along the road, curious as always

The landscape is somewhat disappointing, mostly bare rock. In the Khareef time, mid-June to end August, it is probably a lot more attractive, when the tip of the monsoon brings a steady amount of drizzly rain to this area, rejuvenating the vegetation. But it is February, now. What doesn’t help either is that the road is everywhere being upgraded from good, and perfectly fit-for-purpose, two-lane tarmac to the inevitable 4-lane dual-carriage way. It is not that we have met a lot of traffic in this part of Oman.

In a breeze we reach Salalah. 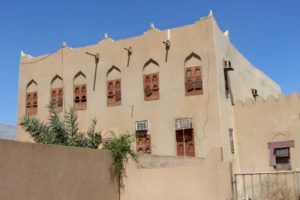 houses in Taqah, another coastal village near Salalah 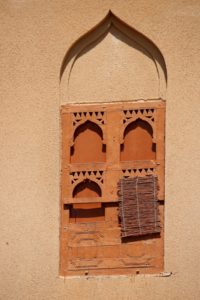 and the windows, closed against the heat