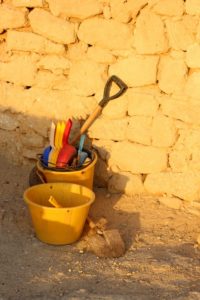 tools at the Al Baleed archaeological site in Salalah

An entirely different region, and atmosphere, is Dohfar and its capital city Salalah, ancient home of the francincense trade 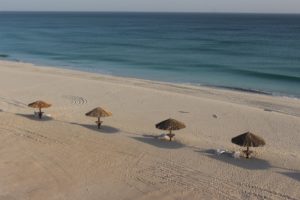 the view from our hotel balcony

Salalah, capital of the Dhofar region in the far south, is the second largest town in Oman, and it shows. It is a modern city, once again with huge roads and plentiful round-abouts – including grass along the sides, something we haven’t seen for a while. Buildings, too, are mostly modern, and like Muscat not excessively tall, 6-7 storeys high at max. The town centre is full of restaurants, with the usual Turkish and Lebanese variations, an authentic Bedouin eatery – authentic in that one sits on pillows on the floor -, and there is even a Thai. On the edge of town extensive plantations of coconut palm trees and bananas stretch as far as one can see; but especially the banana plants have suffered from the storm of the past few days. 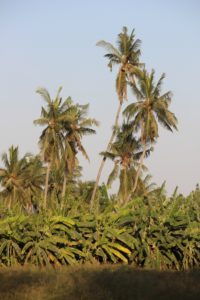 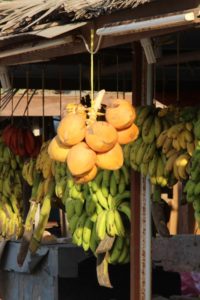 the market, selling all those palm tree products

The coastal zone of Salalah is attractive. The wide sandy beaches, fringed by palm trees, are mostly undeveloped, and even where hotels line the boulevard, the beach itself is untouched. Tourism is an important economic component here, with people from all over the Arab world coming to Dohfar during the Khareef season, when the monsoon rains keep the temperatures down compared to the scorching desert, and provide a rare glimpse of abundant, if temporary, vegetation. 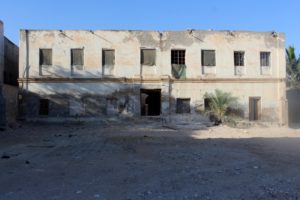 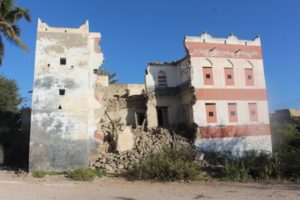 this one has already half-collapsed 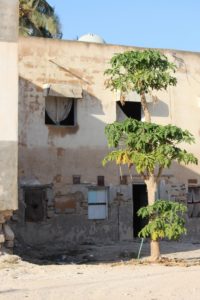 parts must have ben inhabited until not so long ago 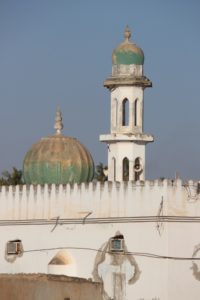 even the mosque seems to have been abandoned 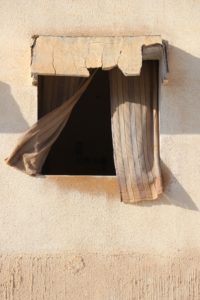 curtains still flying – but the house is empty 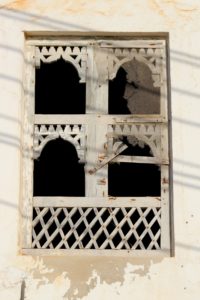 A part of town, along the coast, is fenced off. The houses here are not even that old, but as in so many other parts of Oman, they are empty, part-collapsing. Abandoned in a hurry. But unlike in other parts of Oman, this is not because of civil war, or decay, or lack of interest; according to local shop owners this is the site for another resort, except that it has been like this for some 10 years already, without any progress – unlike so much else in Oman, where progress is instant and visible. Would this be a case where government acts faster than private enterprise? 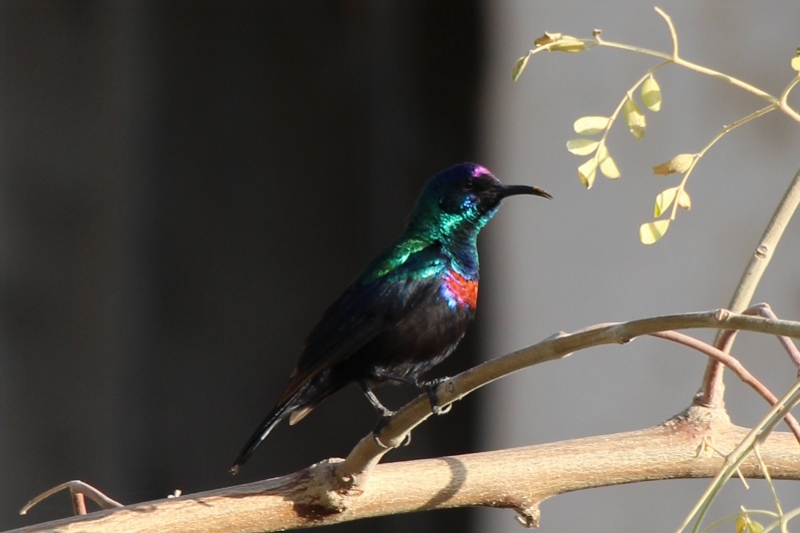 which creates, all together, a paradise for birds 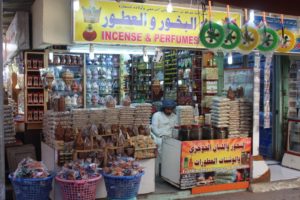 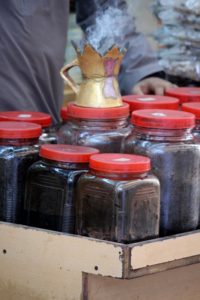 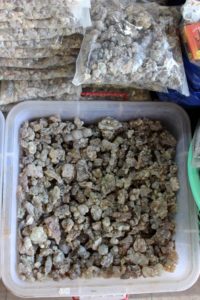 and the francincense concretions themselves 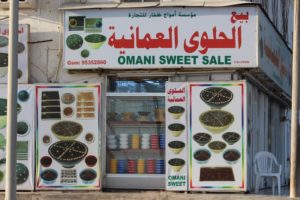 better are the local sweet shops

The Salalah souq, close to the fenced off development site, is a bit disappointing. A few narrow streets contain shops that sell mostly tourist stuff; lots of textile from India, miniature camels in every form and size, from wood, metal, or as soft toy, and the typical Omani headcovers, small round hats – I cannot imagine, but obviously these are also being bought by tourists.

And then there is the frankincense, in large and small bags, in courser and finer nodular concretions, for eating and for burning. The resin of the ugly frankincense tree, seeping out through incursions made in the bark and subsequently dried in the sun, has been the subject of international trade for thousands of years, finding its way from Southern Arabia to Egypt, Jerusalem – the Queen of Sheba reputedly presented it to King Solomon, and so did the three kings to the baby Jesus -, Greece and Roman, where it received fame in mythical and religious ceremonies. The first stop on the overland trail was the city of Ubar, often referred to as the Lost City, as it has since disappeared under the sands of the desert – only to have been found back, perhaps, in the 1990s, even though there is very little to see today. A better idea of incense trade can be gained from Khor Ruwi, the so called archaeological park to the east of Salalah, where the ruins of this 2000 year old harbour town have been restored. The museum is rather uninteresting, but the view from the citadel, across the now silted up lagoon where in ancient times the ships moored to take on their precious load of frankincense, is great. 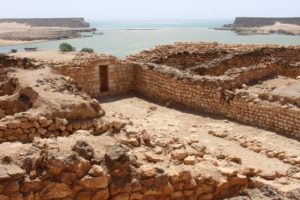 the archaeological site of Khor Ruwi, with the silted up lagoon in the back 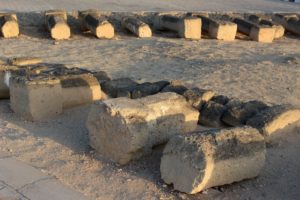 pillars lined up for restoration in Al Baleed archaeoligical site

Another ‘archaeological park’ has been constructed around the ruins of Al Baleed, a 12th Century trading port for incense, which is now inside the city boundaries of Salalah. This is mostly a pile of rubble, with stone paths in between, that are lit in the evening. There is the occasional remains of a structure, a mosque or another building, and the outer walls and the outline of the occasional watch tower, but a lot of imagination is necessary. Unlike in Khor Ruwi, however, the accompanying museum, that of the Frankincense Land, is a great place to wander around, in between many excellent full-scale and miniature examples of local wooden ships, as well as remnants of the ancient history of this place. 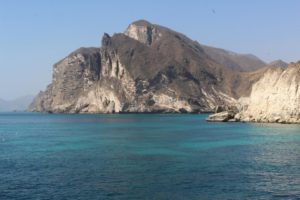 view of the cliffs, from Mughsail

Mughsail, west of Salalah, has more of the fabulous white sandy beach we have come to appreciate, immediately along the coastal road. However, they come with few facilities only, perhaps a pavilion to shelter from the sun, but nothing else. The special touristic attraction here are the spectacular blow holes, where sea water splashes up through holes in the rock. But unlike the beaches, this area is very much developed by the Ministry of Tourism, with paved walkways, and viewing platforms, surrounded by wooden railing to prevent anybody from falling in; the blow holes themselves have been covered with metal grating, cemented in place, so any authenticity is well and truly gone here. Like the water – also gone -, so the blow holes were just holes (perhaps we should have been here a few days ago, with the storm!) 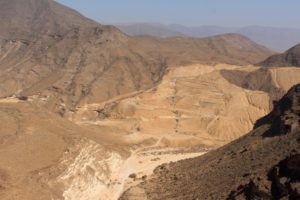 and the road upwards

The really attractive part comes past Mughsail, where the road makes a steep ascent into the mountains, providing fabulous views over the cliffs, and towering rock formations. The road itself is an equally impressive engineering feat, winding up onto the plateau well over a thousand meters high; never mind that it is used by camels, too. From here it is still some 100 kms to the Yemeni border, close enough to have to clear an army check point. This took us 15 minutes, but all in good spirits. Yet I wonder what they were really doing: after he had given us our passports back, the soldier asked where we were from…. Right! When we returned, some time later, after having enjoyed more mountain scenery, one of the soldiers wanted to check out our passports all over again – it is not that they get that many foreigners, here -, but common sense prevailed in the end, and we were waved through without further delays. 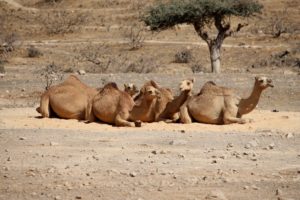 camels along the track to Fizayah 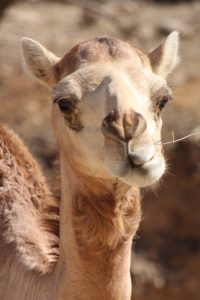 expressive faces, they have 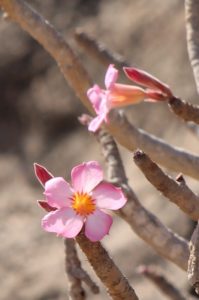 a rare flower, not yet eaten by the camels

We end the day at one of the pristine and poetic white sandy beaches of Fizayah, reached by a narrow and steep, unsurfaced track from the plateau down. Totally secluded even though a few hundred meters inland literally hundreds of camels enjoy the yellow grass on the slopes, something we, too, haven’t seen for a long time; but the camels don’t come to the beach, which we had all for ourselves. 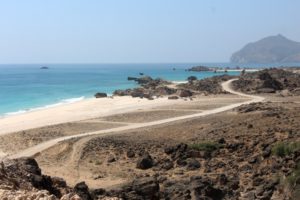 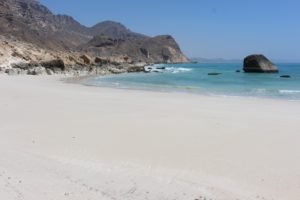 and this is our personal private beach 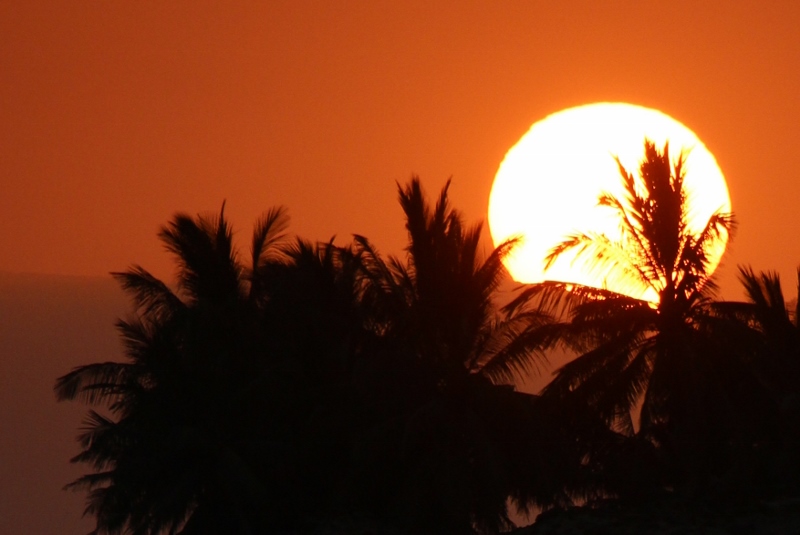