The Sharqiyah Sur to Salalah: the Coastal Road continued

Sur to Salalah: the Coastal Road 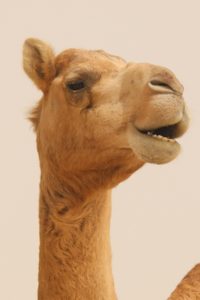 a camel along the coastal road from Sur to Salalah

The first half of the Coastal Road from Sur to Salalah passes through Mahout, the extensive dune fields of the Wahiba Sands, and Ad Duqm, the mother of all infrastructure projects. A bad storm limited not only our visibility, but also our options.

The quickest road to Salalah, from Muscat or Nizwa, and even from Sur, is the road that cuts through the centre of Oman, part-dual carriage way, part-four lane, but for almost its entire length completely uneventful. Look left or right, it is flat desert landscape. However, there is also a coastal road: much more attractive, albeit somewhat slower. So that’s a no-brainer. 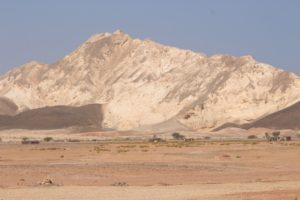 From Sur the road skirts along the sea around the promontory of Ras Al Hadd, Oman’s most eastern point, and the place where turtles come ashore to lay their eggs. They do this at night only, but that doesn’t diminish the attraction for hordes of tourists, who happily push and shove, and poke the camera lens right in the face of a hapless turtle. Not my type of entertainment.

Past Ras Al Hadd the road turns south, and comes down from the cliffs to sea level, along wide stretches of beach and through numerous fishing villages. The smaller fishing boats, not much more than dinghies with outboard engines, are lined up on the beaches, the bigger ones, large dhows, are moored offshore, in a long line on the horizon. The villages themselves are unobtrusive, low key collections of simple houses, mostly one-story, in pastel colours, and with crenulations along the roofs. The main street is full of colourful signs in Arabic and English, announcing coffee houses, and a wide range of shops, from groceries – food stuff selling – to ladies and men’s tailors, steel works and car washing and polishing – a very popular business. In some of the villages a small port has been created, by building a protective wall into the sea, a smaller version of the one in Sur. The wall shelters an artificial bay where the boats offload their catches; in other places the fish is landed straight onto the beach. 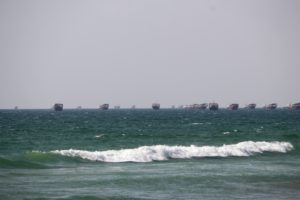 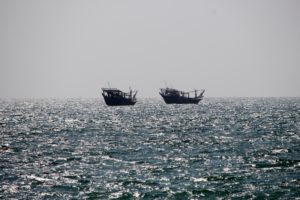 two more dhows, in the sun 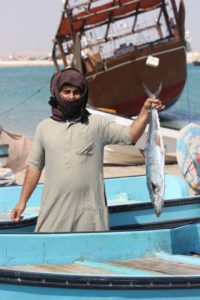 fisherman with the catch of the day 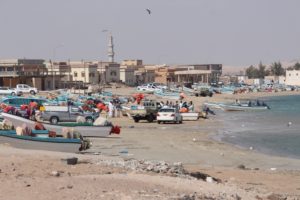 fishing boats landing the catch on the beach 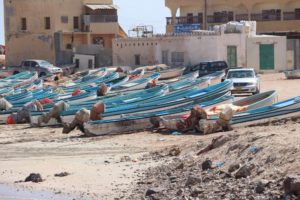 fishing boats pulled up ont to the beach 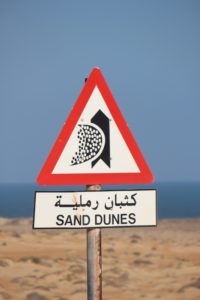 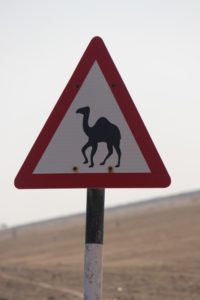 not that dunes are the only danger!

Initially there is little to see outside the villages, except the occasional camel, but soon the first dunes start appearing. This is where the Wahiba Sands, a section of desert that runs south from Ibra, reaches the coast. When we spotted our first dune, we took the car off the road, drove near, and walked around it, but a little later the entire countryside consisted of alternating ridges of dunes, a beautiful sight in the late afternoon sunlight. 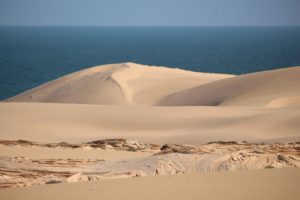 dunes along the coast 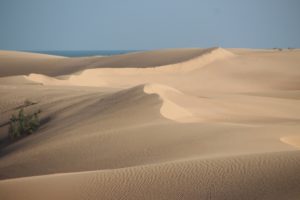 and more, with sharp sand ridges

scenery of the dune landscape 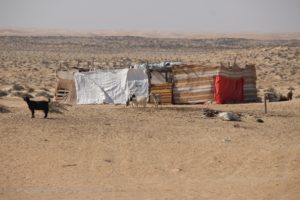 Another feature along the road are the Bedouin tents, sometimes a  single tent, but more often whole tented villages, perhaps a hundred of them neatly arranged, complete with water tanks. Four-wheel drives have replaced the camels as preferred mode of transport, and are parked next to many of the tents. 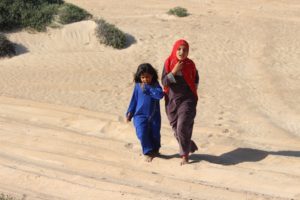 the girls are interested in our car, or us, or in what we have to offer

We break the journey in Mahout, a rather nondescript town, which stands out because it has accommodation, which is not often the case along this coast. Our pick – the only we found – is the 2 months-old Mahout Apartment-hotel, which has a number of enormous apartments, still half empty, but no guests yet, it seems. 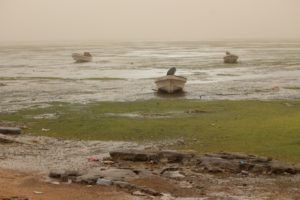 Next morning we wake up to a real storm, which gets worse with the hour. As it turns out later, this is something affecting the entire Arabian Peninsula, with snow in the mountains, even outside Dubai, and rather chilling temperatures all around. Our initial plan was to drive via a small unsurfaced road to the villages of Filim and Al Khaluf, before rejoining the main road again. But we don’t get further than Filim, where we turn back: in the clouds of dust and sand that now blow through the air we cannot find the continuation of the track, and even if we would have found it, we would have had great difficulty following it. At least, on the main road we have the help of the tarmac, now not more than a vague dark-grey band in front of us, that shows us the way. Needless to say that we didn’t enjoy much of the landscape. Needless to say, that we cancelled our plan to go camping, that night: we ended up around midday in Ad Duqm, which has a pair of comfortable resort hotels, instead. 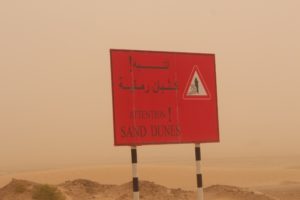 the warning becomes more serious, with the storm 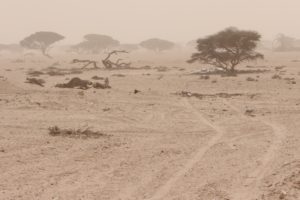 the low trees, hardly visible in the sand storm 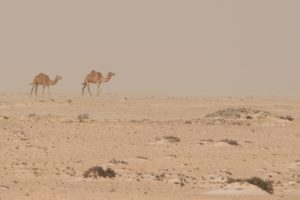 camels don’t seem to be bothered by the sand

And that is about all Ad Duqm has, at the moment. Not so long ago the area around this small fishing village has been bombarded to Special Economic Free Zone, which has brought a wave of infrastructure projects, from a new airport to a new harbour, all connected with brandnew dual-carriage roads – there is Tourist Road, and Resort Road, handy if you need to find your hotel -, but for the rest there is not yet much else. Big signs indicate Seafront District (but because of the weather, we could not check whether the seafront was actually there), and Commercial Business District (definitely, no commercial business yet, just desert). The roads have several impressive round-abouts, but none of them lead anywhere; the tarmac of the connecting road ends 50 meters further in the sand – in both directions. Just one of the turn-offs leads anywhere, to Ad Duqm’s only tourist attraction, the Rock Garden. But this road is closed, so we continue. A little further, out of nowhere, rise the two beach resorts, isolated beacons in the desert sea around them.

(continue to the second half of the coastal road here).