the city the resilience

Yesterday I wrote about some of the damage to the cultural heritage of Haiti, and I also mentioned the Holy Trinity Church. This church was built in the 1920s, as an Episcopal church, in the center of Port-au-Prince. What makes the church unique is that in 1950 and 1951 a series of murals were painted by some of Haiti’s greatest ‘first generation’ painters. A guy called Dewitt Peters had started the Centre d’Art in Port-au-Prince, an art school to encourage Haitian painters, in the late 1940s. The school doesn’t exist anymore, I think, but painting has subsequently developed into a quite extraordinary art movement, and a successful export product. DeWitt Peters also guided some of the most talented, and now most famous painters with the murals in the church. Toussaint August, Wilson Bigaud, Philome Obin and Castera Bazile are some of the painters who have contributed. 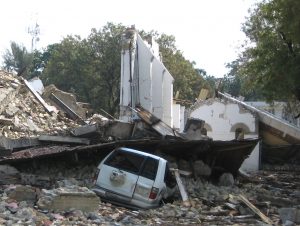 the front of the Holy Trinity Church, with only one wall, the north transept, still standing 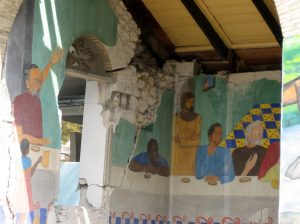 part of Philome Obin’s “Last Supper”, even without a lot of Bible knowledge recognizable, I would say 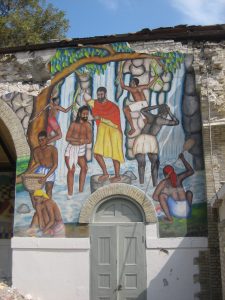 Castera Bazile’s “Baptism of the Lord”

The church is no more. The only mural I could find back today was one by Castera Bazile, and another, half hidden, by Philome Obin. Unlike in the past, when the church was dark and the murals not very well visible, now this one was lit by bright sunlight, not hampered by a roof, or an opposite wall. Very sad. 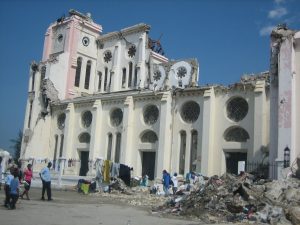 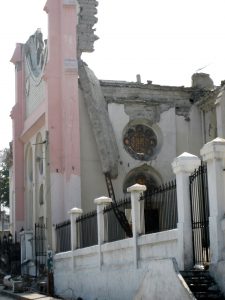 For good measure I also add some photos of the Cathedral – no further comments needed. Last time I was in here was in 2001, I think, during the installation (if not coronation) of president Aristide.

I promise that this will have been the last pictures of destruction on this blog…. probably.

2 Responses to the church