the aftershock the church

Long awaited….. I finally went downtown last week, to see what the city looks like now. This is not going to be a pretty picture. the palace, symbol of a broken nation

Port-au-Prince has changed from how I remember it, of courses. Every city will be different after a massive earthquake. Some of the buildings that played a dominant role in our life when we were here 10 years ago, are no more. The Montana Hotel, where we stayed the first 6 weeks, has collapsed. No one is allowed near it, it is guarded by American soldiers, to protect the remains of the people still burried under the rubble. The Caribbean Supermarket, the largest of its kind in the fancy suburb of Petionville, has collapsed. The presidential palace, many of the ministries, churches – including the Holy Trinity Church with its famous murals by Haitian painters -, the cathedral, many schools, hospitals: all have collapsed or have been heavily damaged. The palace especially is for me the symbol of a broken country. Yet, somehow, I don’t know how earthquakes go about their destructive powers, the devastation in Port-au-Prince is different from my post-tsunami experience, where everything, literally everything had been wasted. Here some houses have collapsed, sometimes in between other houses that are still standing. A corner building in the commercial district may have turned to rubble, whilst other shops on the same street seem in tact. In some cases the edge of a building has given way, resulting in the whole building having been tilted, a really odd sight. And of course, it is still unclear how much damage has been done to buildings that appear OK from the outside. 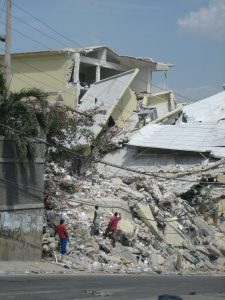 the Caribbean Supermarket, or what remains 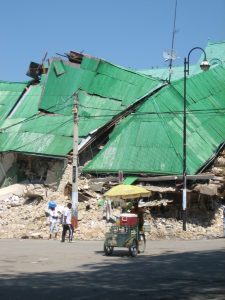 the ministry of economic affairs, one of the oldest buildings of Port-au-Prince 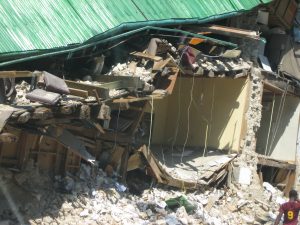 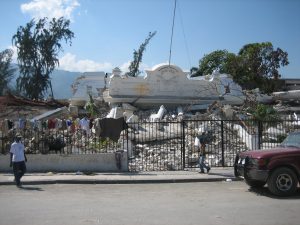 Palais Justice, once a building with an attractive neo-Roman facade

One thing that has largely been saved are the gingerbread houses that are all over town. Many (but not all) of these wonderful, mostly wooden structures, sometimes with brick walls in between, with red corrugated-iron roofs and intricate verandas and balconies, have survived the quake: at least some of the cultural heritage of Haiti has been preserved. So has the Olofsson Hotel, a famous old hotel in gingerbread style that stood model for the hotel described in The Comedians by Graham Greene, a brilliant book about Haiti under the Doc dynasty – although I don’t think the weekly jam sessions of the rock band RAM have started again. Sadly, the Nader museum, containing probably the most extensive collection of Haitian art, has not survived, and most paintings appear to have been lost. 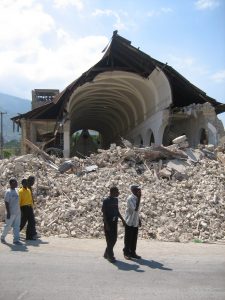 what was once the Eglise Sacre Coeur, with stained windows 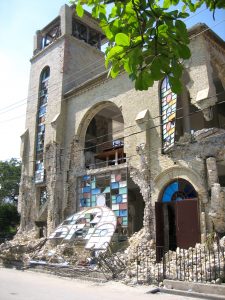 The city has also changed in other ways. There is less traffic then I remember, despite the influx of large, antenna-wielding 4×4 vehicles from aid agencies that accompany every emergency response. This is no doubt because many of the cars have been damaged, some 200,000 people, perhaps 10% of the population, have died, and another 500,000 have left the city to stay with friends or extended family elsewhere. But other changes, not earthquake related, are also obvious, and for the better. There are traffic light installed at many intersections – the only traffic light I remember from 10 years ago was one downtown, which was most of the time not working because of lack of electricity. Better even, people seem to respect the traffic lights! I have also seen several garbage trucks, including workers throwing garbage in them – unheard of in the past. Haitian police is more prominently present, and seems to be doing a reasonable job in maintaining order. Taptap drivers are sporting a bluetooth earpiece! Blue signs indicate where taptap’s, the shared taxis, are supposed to stop: for good measure, these are being completely ignored. There are many more bars and restaurants around then 10 years ago. Some of the roads have been improved – although many others haven’t, and I keep on telling my colleagues who are here for the first time that the huge potholes are not a result of the earthquake!

What remains the most visible change, though, is that every free space in the city, every piece of grass, whether a garden, a little square, the local football pitch or the national stadium, is occupied with tents and plastic sheets, with people living outdoors. Let’s hope it is just a temporary change. 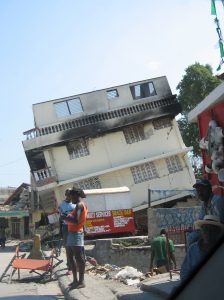 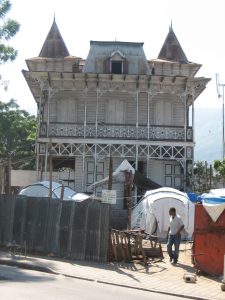 a surviving gingerbread house – but the garden is full of tents! 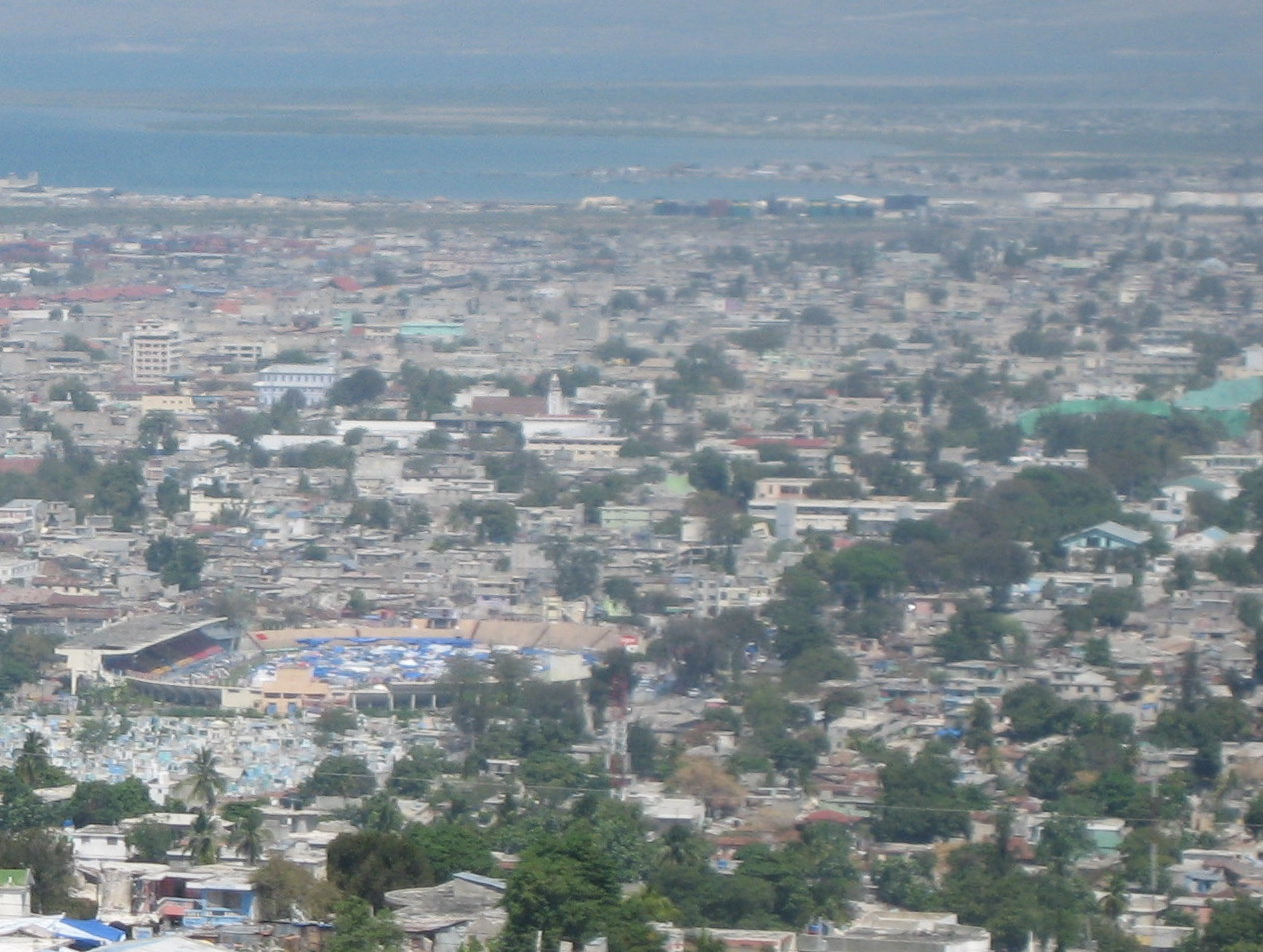 and even the national stadium is full

One Response to the city