the church the visits

It is less than 2 months after the earthquake. Everybody living through such an experience would be devastated, no doubt, and so are the Haitians; you notice it when you talk to them about what happened, to a police man who is guarding the totally collapsed Ministry of Economic Affairs, or to the men who are clearing the rubble from another heavily damaged site; you notice it with the driver when you go downtown and see the enormous damage, and he becomes very quiet, talks very softly. 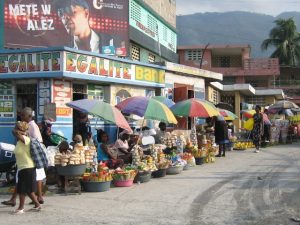 street markets are like before, colourful – albeit a little faded

And yet, Haitian society is bouncing back incredibly fast. Markets are up and running again, Madam Sara’s – the ubiquitous market women that dominate a whole commodities sector, whether charcoal or fruit or vegetables – have established themselves on the pavement and in the wooden stalls under colourful umbrellas along the road, the shops have opened where they can. Trade is brusque, multiple stands have emerged around the camps that have been established, and life is returning to what is called ‘normalcy’. Now it will take a long time to return to real normalcy, as in what life was before the quake, but it is heartening to see the resilience of Haitian society. 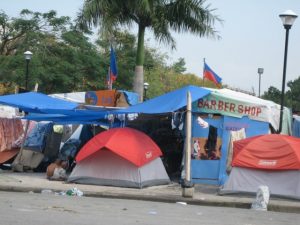 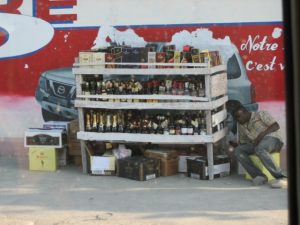 a trader – entrepreneur! – set up shop opposite the UN camp, where else to sell the booze at inflated prices?

I went shopping the other day, in Royal Market – no doubt recognizable for those who have been here before -, and outside I got to talk to some of the street sellers: a man with a beautiful bunch of flowers he wanted to trade with me for an extraordinary amount of cash and a woman who insisted on selling me mangos at a hugely inflated rate because I am a ‘blanc’ (the Haitian expression for foreigner no matter your skin colour, my Ethiopian colleague is just as ‘blanc’ as I am). In the end I didn’t buy the flowers, the man understood that my wife was in The Netherlands (“Ah, Kulit et Rikar!!”), too far away to get them – the flowers, not Gullit and Rijkaard – to her in any reasonable time frame. I did buy some mangos, and a papaya, and some avocados, all together for significantly less than the original asking price for the mangos. And we all parted amicably, having enjoyed not so much the trading process but more the social interaction, sharing a joke and a good laugh, satisfying curiosity. The buildings may have been damaged, the spirit of the Haitian people seems to have survived, and as long as that is the case there is hope that this country will sooner or later get back onto its feet. 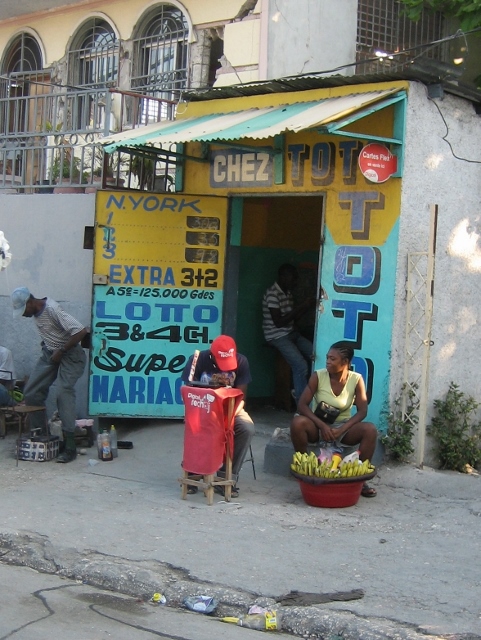 One Response to the resilience