To Chiapas Africa Museum – the Bizango

To Palenque and back to the Capital 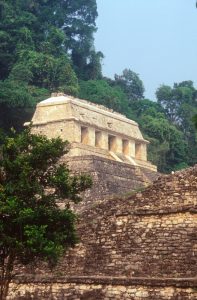 the main building at the preeminent Mayan site of Palenque

On our final days in Mexico we visit some fabulous archeaological sites, of which Palenque is the best known, and most impressive. There is a lot of stone in this one! 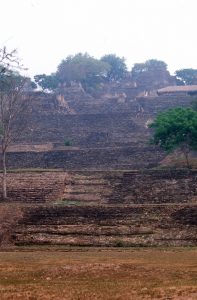 the Tonina ruins, our first Mayan site in Mexico 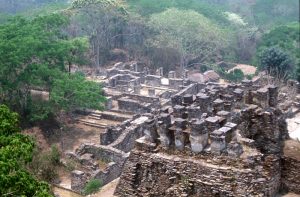 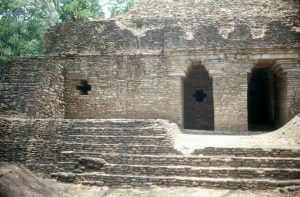 and some of the entrances and windows to the building

After a struggle to get out of Comitlan – ‘todo derecho, derecho’, only to be confronted with multiple junctions immediately ahead, and that five times – we drive to Ocosingo and to the Tonina ruins. This is the first Maya site we visited, and impressive it is, with a seven-platform pyramid with a temple on top, pieces of original stucco remaining, some buildings adorned with bas-reliefs, traces of paint still visible, and very few people. From here we move on to Aqua Azul, a tourist trap with water falls, but nice enough for a swim, especially above the falls and away from the crowds. The most memorable part is, however, the drive towards the falls, where very aggressive local people use ropes across the road to force you to stop, so that they can sell you their wares, food and artesanal stuff. At one stage, officially looking, one person actually sold us a ticket and gave us an officially looking receipt and all. Until today I still don’t know whether this was genuine or not, the receipt was certainly not recognised at the entrance of the park 2 kms further on, yet in the end we did seem to pay less than we were suppose to pay. Whatever, an ingenious scam if it was one. We leave late afternoon, to arrive at Palenque just before dark. That we have arrived in a more touristic zone again is clear from the souvenir stalls that entrepreneurial Mexicans have erected at each of the topes. 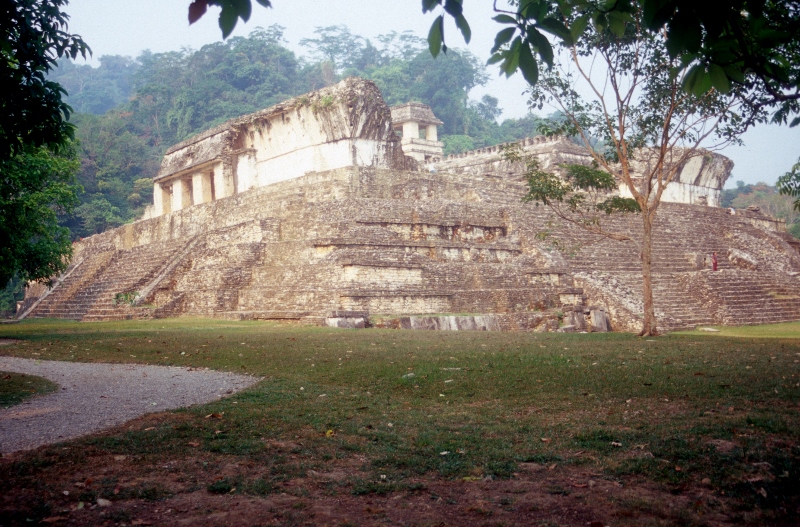 the main site of Palenque 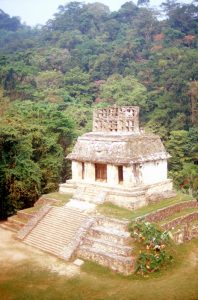 one of the smaller buildings 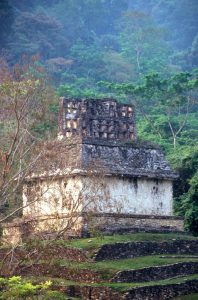 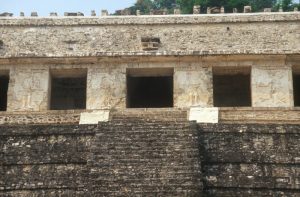 bas-reliefs on the outside of the temple 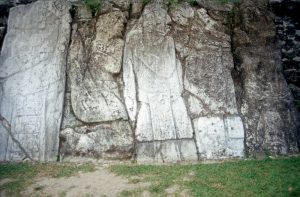 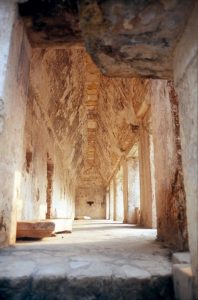 the inside of one of the main buildings 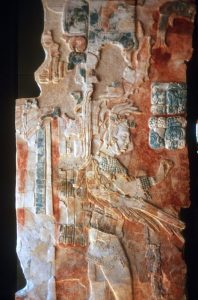 some of the friezes are still with colour

The American diplomat J. Stephens, who travelled in this area in the mid 19th century,  took five days to get from  Comitlan to Palenque, and that was already faster than the standard eight days. He travelled by mule, and he describes some of the worst ascents and descents that he has ever experienced. We took half a day or less, comfortably driving a car, but no doubt less adventurous. Perhaps our view was less spectacular, too, because of the many fires that were burning on the land, a possible cause for the haziness that we have experienced ever since we arrived in Mexico.

Palenque opens its gates at 8 am, perhaps in recognition of its tourist attraction potential. Get the foreigners first, and that worked well: we avoid the masses by arriving early, and when we leave three hours later the Mexican tourists are just queuing up at the entrance. We also ignore the suggested tour direction, and go against the flow, which means that we have the first hour or so for ourselves., including the massive Palacio. Stephens had to clear the jungle around the buildings, when he visited 150 years ago, but we found a well-maintained complex before us. In fact, large parts of the ancient city are still covered, but the most important buildings have been restored, and are easily accessible, demonstrating an impressive collection of architectural achievements, together with some remaining decorations. 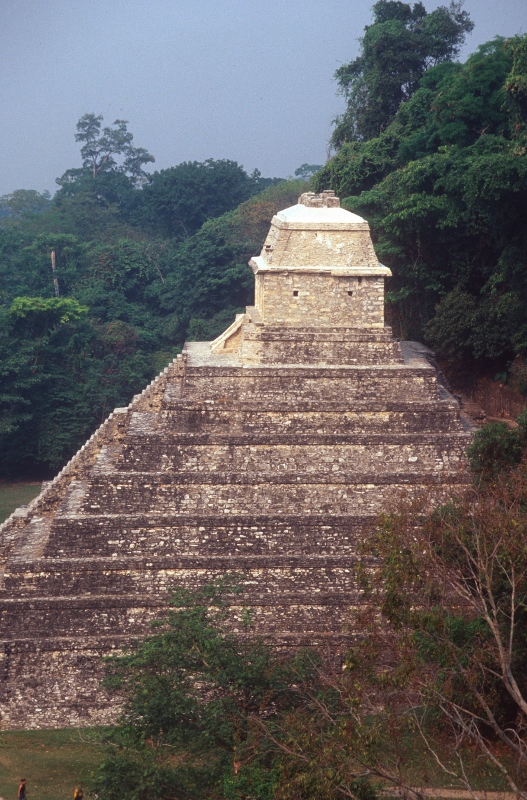 a perfect pyramid, steep stairs and many platforms 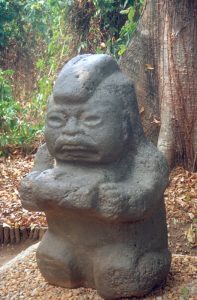 and another one, more complete body 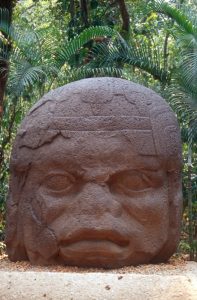 one of the basalt heads in Parque La Venta 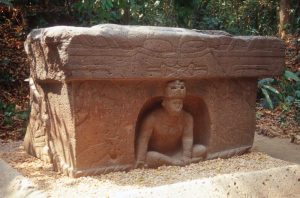 and a stone in the shape of a tomb, although I don’t think it can open

In the afternoon we move on to Villahermosa, an unattractive town, which, however, contains the Parque La Venta, where a leisurely stroll in a shadowy surroundings leads past some 30 huge basalt sculptures from the little known Olmec culture. Outside Villahermosa is the site of Comalcalco, another pre-columbian city, which is different from most in that it used sun-dried bricks rather than rocks for construction, the only alternative in a low-land environment. From here it is a long drive, first via a potholed but rather attractive mountain road back to Oaxaca and then past the rather disappointing Dominican ex-Conventos of Yanhuitlan, Teposcolula and Coixtlahuaca to Nautla, on the Gulf of Mexico. Unfortunately, it is a long weekend and all accommodation is fully booked; in the end we end up in Poza Rica, in the middle of a string of oil fields, rather than on the beach. But the d-tour is once again worth it, if only for the site of El Tajin, our last pre-columbian city, and a fabulous complex with intricate pyramids, enormous squares, and multiple ball courts in a hot and oppressive jungle setting. 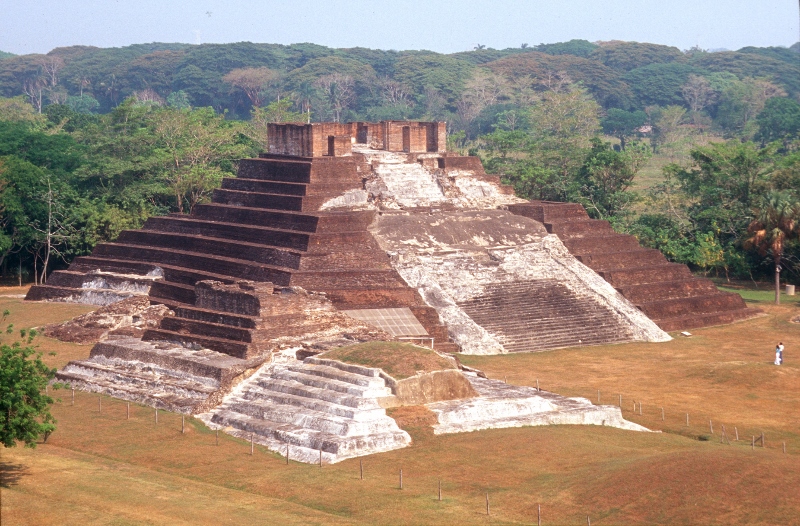 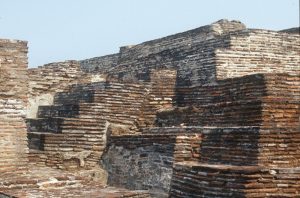 and bricks they are, in many thin layers 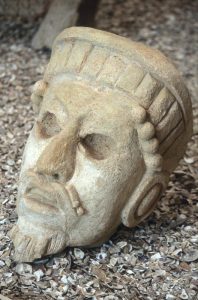 one of the few real rocks on the site 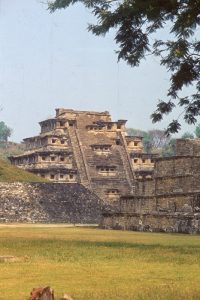 El Tajin pyramid, several plateaus on top of each other 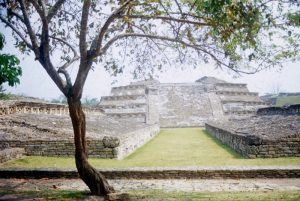 El Tajin pyramid in the back, and ball court in the front 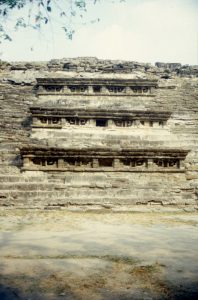 these look like windows in the side of the pyramid 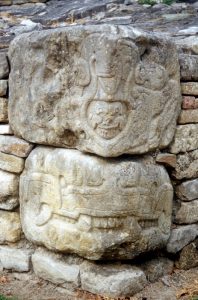 edges of the pyramid have been decorated with carvings 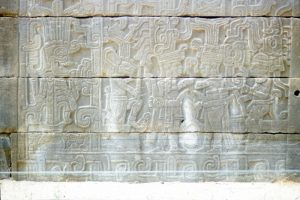 stone carvings on one of the sides

The road back to De-effe is long, slow and confusing, as driving in Mexico has been for three weeks, But: a worthwhile experience, having had the opportunity to visit so many unique places. 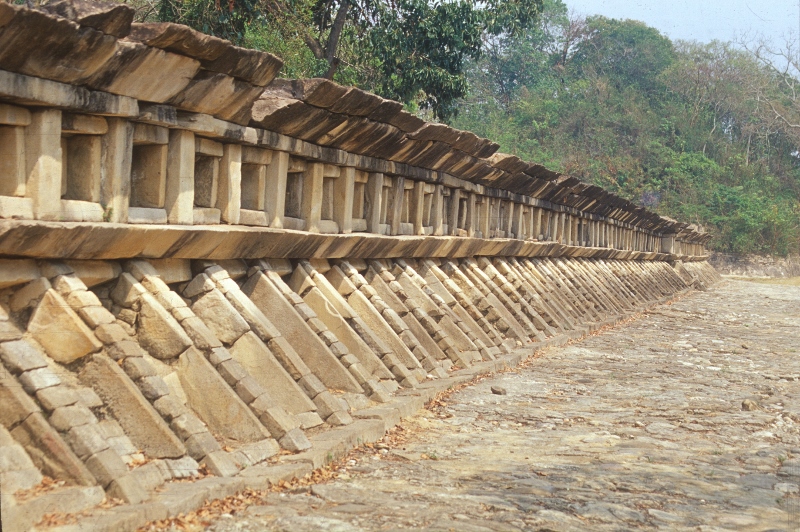 side of one of the large ball courts in El Tajin