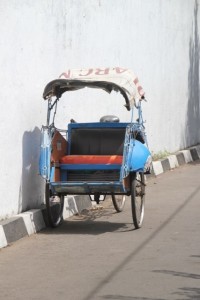 the transport of choice in central Yogya

A very pleasant train ride to what is reputed to be one of Indonesia’s nicest cities; touristic it is, but not disturbingly so, and different modes of transport are endless. 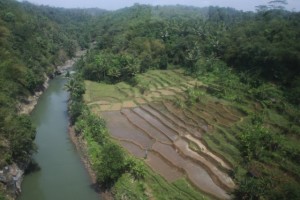 view from the train

Not yet having regained our faith in the public busses, and being offered the opportunity, we took a train from Tasikmalaya to Yogyakarta. And with a train I mean a train, this is how long distance travel was always supposed to be. The Lodaya Pagi, business and executive class only, connecting Jakarta in the west with Surabaya in the east of Java, took just under five hours from Tasik to Yogya, without traffic jams, without the noise of motorbikes, without narrow seats where you need to fold your legs over your shoulders. Large comfortable Pullman wagons, reclining chairs, warm lunch served around noon. Landscape of hills, palm trees, padis, more palm trees, volcanoes, more palm trees, villages and the occasional town, and more palm trees, slowly passing by. This is how travel was meant to be.

We had so far not met many foreign tourists, but Yogyakarta changed that. Close to Borobudur and other temples, and an attractive city  in itself, this is where the tourists congregate. It also changes the way people treat you, with more indifference than we had experienced elsewhere. In a way, that was a welcome change, like not so often hearing the “hello, mister” and not so often being asked to pose in the photograph. But it also erodes the spontaneity from the average Indonesian somewhat, everything becomes much more business-like, from restaurant waiter to becak driver, they have all seen it before. Still, we met plenty of very friendly people, too, from the market seller who makes me try his spicy krupuk to the head of the tourist information office, in whose restaurant we happened to eat. 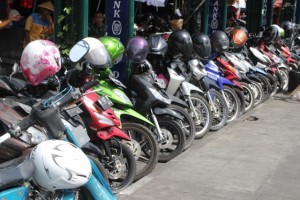 the motorbike is still transportation number one, of course

Remarkably, we met hardly any hard sellers in batik, something Yogya is famous for (hard sellers as well as batik), and most of the touts outside the monuments quickly backed off once they realized we were not interested in bamboo flutes, hats, sun glasses or books. We have had that different, in the past! 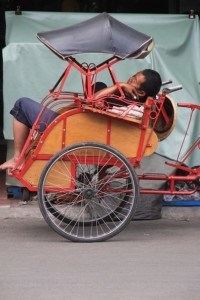 not every becak driver is always busy

Yogya is also good for food – a wide variety of kitchens, with so many foreigners to satisfy -, and for various forms of transport. The central part where everything is happening is relatively compact – I say relatively, because in the end everything is always much further than you think it is -, relatively compact, thus, meaning that some of the slower forms of transport are perfectly acceptable here. We tried the becak, a push bike with a double seat in the front, and with sun roof (well, double seat for Indonesian people, we Westerners are in fact too big to fit the two of us; also, with a sun roof, that needs to be folded away, as we Westerners are too tall), and the motorized becak, same thing but with a small moped engine, so much faster, and much less guild feeling. Then there is the andong, a horse-drawn cart, which picks up and drops off passengers as the driver sees fit, but as a foreigner you are generally expected to charter the whole thing. Which is all still perfectly affordable, with or without bargaining. What all of this does to the traffic of Yogyakarta, especially in the narrow streets of its centre, is easy to imagine, yet, most people seem to take it lightly. In fact, traffic here seems to be much better than in Jakarta or Bandung. I tell you more, Yogya is actually a very pleasant town to walk around in. 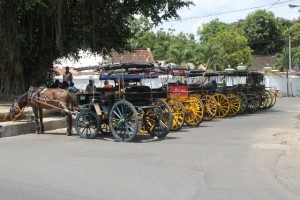 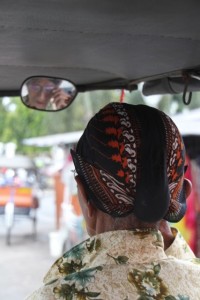 our andong driver, you wouldn’t imagine him on a motorbike

More about the sites later. But first, to the Borududur.

See here for our hotel choice, an absolute gem. 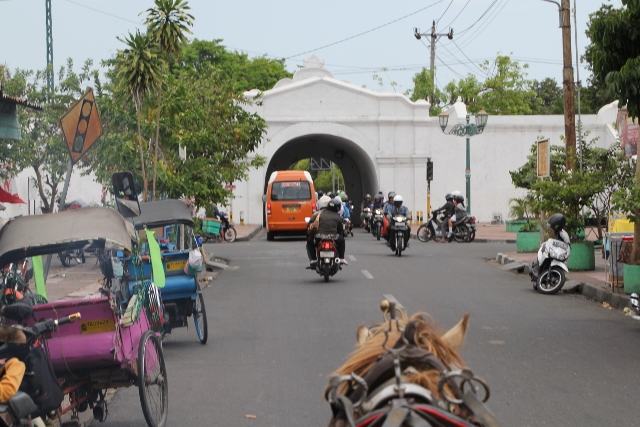 Yogya street view from the andong