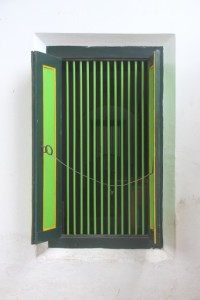 window in the sultan’s palace

Perhaps the most popular tourist town in Indonesia, Yogya’s attraction outside the Kraton is mostly from the unexpected, off-the-beaten track experiences.

Yogya is one of the two royal cities of Java, the other being the Solo. Home of the Hamengkubuwono dynasty, the present sultan of that name being the tenth generation, the city has occasionally played a political role in it 250 year existence, but by now is mostly recognised for is cultural role, promoting the traditional Javanese arts – thanks to generous support from the sultan and other royals. 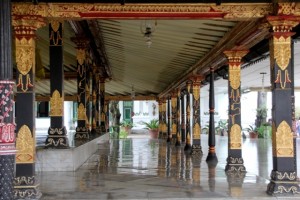 the central platform of the palace 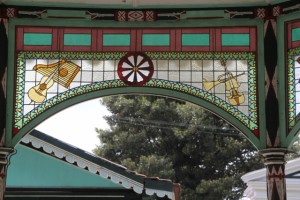 stained glass in what must be the band stand 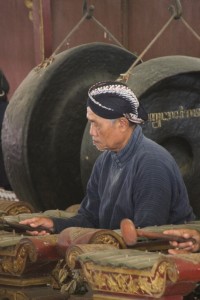 one of the players of the gamalan orchestra

The sultan’s palace, located inside the Kraton – the walled old city, with numerous kampungs surrounding the palace –  is the main sight in Yogya. The words that come to mind wandering through the various sections are “tasteful” and “humble”. No multi-story buildings and grandiose towers, no ostentatious display of gold and silver. Instead, simple buildings and pillared courtyards, decorated with stained-glass windows, where gamelan orchestras play their music, creating a peaceful atmosphere. This is further enhanced by the court attendants, all elderly men in traditional batik costumes, a kris – a traditional curved knife – stuck in their belt. 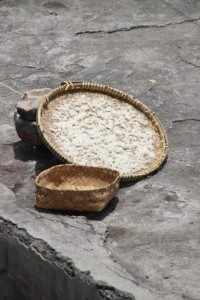 krupuk drying on the roof

Drifting through the Kraton outside the place, and losing all sense of direction in the narrow, winding streets, you could imagine Yogya a hundred years ago, not much seems to have changed. A parked becak, krupuk drying on the roof, and the ever-present laundry outside tiny wooden houses. Sometimes we end up in the yards of people’s homes, because distinguishing between what is street and what is private entrance is not always easy. 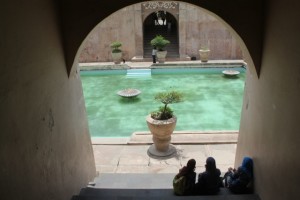 Also inside the Kraton is the Waterpalace, a by now disused playground for the sultan’s harem. Nicely restored, here again one walks in and out of kampungs through the various entrances and exits of the complex. Other obviously old structures are less recognizable, and have fallen in disrepair, but still add to the charm of this neighbourhood. 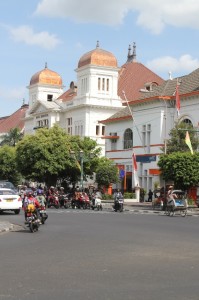 the Bank of Indonesia building

North of the Kraton starts Jalan Malioboro – indeed, named after the Duke of Marlborough, and I have no idea why. This is the main street of central Yogya, where all the action outside the Kraton is happening. Some old buildings, the Bank of Indonesia actually being one of the nicest, the restored Dutch fort Vredenburg being rather disappointing; plenty of shops left and right, and lively street life. 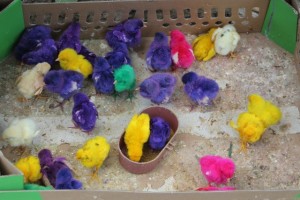 Another so-called attraction from the guide books is the bird market, nowadays located to the south of the Kraton. So we duly took our becak there, only to come away disgusted. Rows of cages with, indeed, the most precious birds. All desperately trying to get out. Other cages cramped full of birds, or lizards; cages so small that the owls inside cannot even open their wings – who on earth keeps owls in a cage?; young chicken dyed in all kind of colours, just for fun. This cannot have been the idea when man was put on top of the food chain.

After the main sites, it was time to explore the Yogyakarta outside the guide books. We had gotten a few tips from the director of the tourist information center, who also happened to be the owner of the restaurant we had lunch, one day, and they proved to be excellent suggestions. 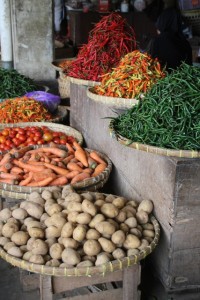 various chillies in the market 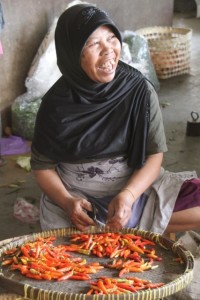 and one woman having fun chopping them up 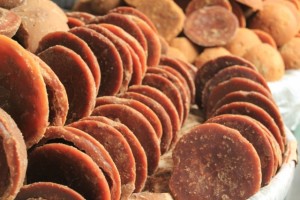 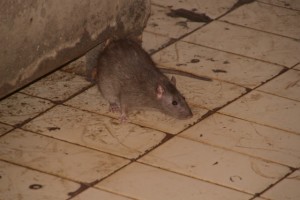 one of the more permanent inhabitants of the market

Along Jalan Malioboro, a large building is home to Yogya’s main market. At first it seems to contain mostly batik and cloths shops, who occupy the front end, as well as quite a long way inside. It didn’t look very attractive, until we reached all the way to the back, where the food and vegetable stalls are. All inside, but as colourful as a market ought to be (you know our fascination with markets, by now) – with pictures to prove it. Spices, chillies, dried fish, hundreds of types of krupuk. The meat section was the only one less well developed, or it must be for the shoe-size rats that were happily squirreling their way around (and I have big shoes!). 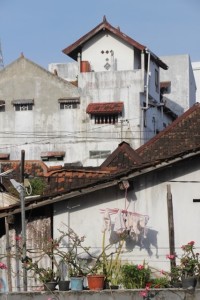 part of the neighbourhood along the river 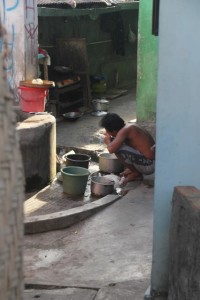 a man washing the dishes in his courtyard 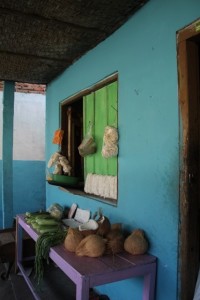 a shop, literally a hole in the wall, in the riverside kampung

There are also a couple of rivers flowing through Yogya – well, rivers is a big word -, and one of the things to do, is to wander along one of those at the end of the afternoon. The working day is finished, people have come home, are relaxed, start cooking. Charcoal grills are being fanned everywhere, sates being prepared. In their own neighbourhood, fewer women, hardly any actually, are covered, and it bothers nobody. This is mainstream Javanese society, this is how the majority of towns folk live, I suppose. Small houses, many neatly maintained; large collections of plants in front, some flowering; small shops, not much more than a hole in the wall; the inevitable motorbike, even in these narrow alleys. Wonderful atmosphere, everybody so friendly, smiling, asking where we are going – the concept of just taking a walk remains alien, of course. Here the “hello mister” or the “where are you from” is a lot less annoying, actually allows for the opening of a conversation, however basic. We easily forgive them having a little bird in a cage, in front of their house.

next: outside Yogya is a second big temple complex, Prambanan 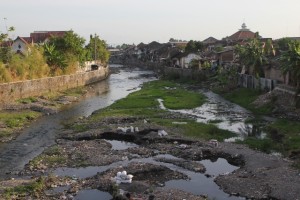 the view from one of the bridges