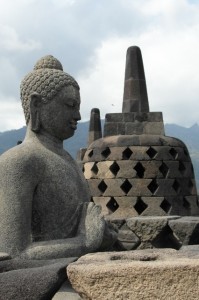 Borobudur, near the top (courtesy one haphazard, accompanying tourist)

Borobudur is the most preeminent tourist site in Indonesia, a Buddhist temple of impressive size and architecture as well as a gallery in stone of some exquisite bas-reliefs.

It’s somewhat ironic that the two biggest tourist attractions in Indonesia – the largest Muslim nation in the world – must be a Buddhist temple, and the beach paradise of Bali, thanks to its Hindu culture about the only place where as a woman you can get into the sea in a swimsuit. Bali we won’t do, averse as we are to tourists, but Borobudur is a must-see.

About an hour’s drive from Yogyakarta, this was perhaps a good moment to try the bus again. And it was indeed. After an uncomfortably long wait at the bus station, where luxury touring car after luxury touring car passed through, but none with destination Borobudur, our bus finally pulled in. An old, battered, non-AC vehicle which, despite significantly speeding wherever possible, took almost two hours to reach Borobudur, thanks to all the people that want to get in and get off outside the regular bus stations. To cushion the blow a bit, we had booked ourselves into a really nice hotel. 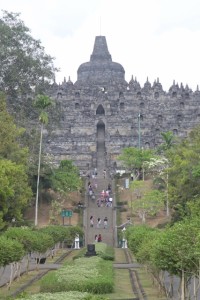 approach to the temple

To get up at 4.30 in the morning, or not to get up at 4.30, that was the question. The reason to get up early, is to see the sun rise, obviously, but when we arrived late afternoon, it was raining, and the weather forecast didn’t promise much better weather ahead. In the end we didn’t get up at 4.30, but at 7, which was great, because by the time we got to the temple complex, all the early groups were leaving, and the bus tours from Yogyakarta had not yet arrived. Perfect timing, we had the complex, although not entirely, pretty much for ourselves. 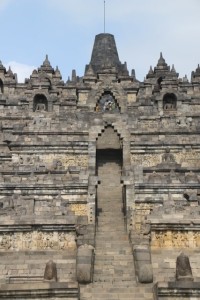 near the temple, stupa on the top, and note the bas-reliefs on the lower levels 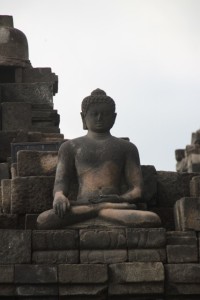 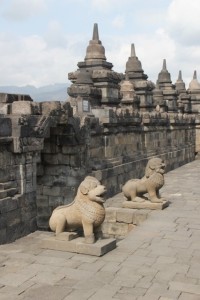 one of the upper galleries

The temple complex is in fact just one temple, with nine levels, reputedly built from 2 million blocks. At the top are a number of stupas, surrounding a bigger central stupa, but the nicest part is actually walking the lower levels, with extensive stone carvings telling the story of man’s path to enlightenment; the top level, with the stupas, represents the ultimate goal, nirvana. To be honest, I am not a specialist in Buddhist teachings, but many of the carvings are esthetically and artistically of high quality, a pleasure to look at even without understanding the larger context. Faces of many of the women are executed with nice, soft expressions, warriors look really menacing. The carving of a boat shows how far developed shipping in Asia had already been at the end of the 8th Century, when these reliefs were created. 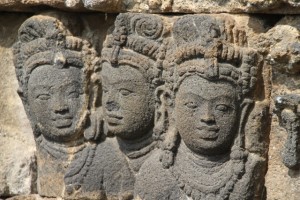 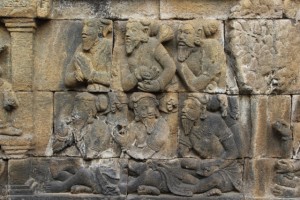 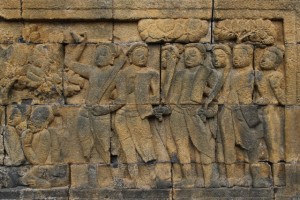 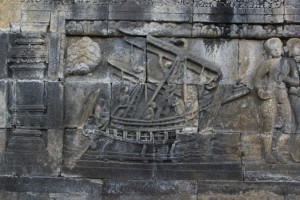 bas-relief of a ship 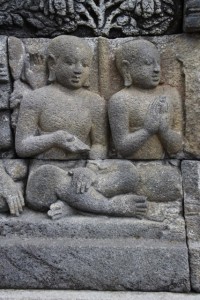 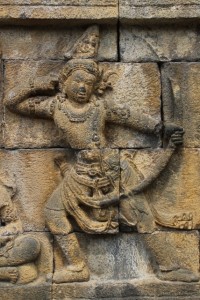 bas-relief of a warrior

Parts of the temple have been restored; after all, it is already remarkable that such a monument still stands in Indonesia, with its many earthquakes and volcanoes. I suspect vandalism will have taken its toll, too, many of the sculptures are missing their heads. Add to that bomb attacks, such as the one in 1985 by an anti-Suharto group, and one starts to appreciate the solidity of 8th Century construction! Except that the foundations proved to be rather shaky. The main restoration phase in the 1970’s and early 1980’s saw the temple being taken down almost stone by stone, and build up again after concrete foundation had been put in place. Yet, and intriguingly, when one visits the museum, on the way out, there are still hundreds of stones set out in the museum garden, like pieces of a giant puzzle that haven’t been fit yet… 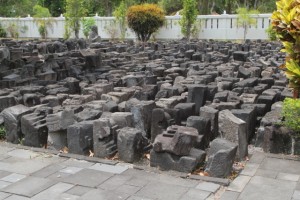 random stones in the garden of the museum, one big jigsaw puzzle