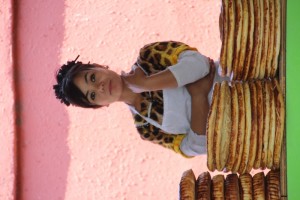 young woman selling bread along the road in the Fergana Valley

The eastern-most part of Uzbekistan, the Fergana Valley, is not particularly pretty, but the friendliness of the Uzbek people easily makes up for that

And now for the hard part; the easy weeks of our trip are already behind us. In touristic western Uzbekistan people speak enough English to help us out, if we don’t understand the locals, and quite a few things are written in Roman script. But already in Tashkent we experienced several challenges, menus in Cyrillic only, without pictures of the dishes, and quite a few times a complete lack of English, or any other Western European languages. Russian, yes, but unfortunately, our Russian, even Sofia’s, is almost non-existent. The further east we go, the more Cyrillic-only things become. 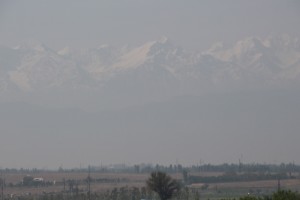 mountains along the dge of the valley just about visible

The eastern part of Uzbekistan, east of Tashkent, is called the Fergana Valley, a huge, fertile stretch of land that extends into Kyrgyzstan. You just have to believe it is a valley, because most of the time the mountains that define the extend of the valley are invisible, too far away, or too hazy to see them – only on our last day we saw them, spectacularly rising to great heights, abundant snow on top: this is where we will be going later, the Pamirs.

There are not many option to get to Fergana, the town in the middle of the valley of the same name. Unusually, there are no busses, and taking the train is complicated by the fact that the infrastructure is from the Soviet era, and at the time did not take into account the nominal borders of then-individual Socialist Soviet Republics, now independent countries. So on the way to Fergana the train will pass through Tajikistan, before getting back into Uzbekistan, and that requires additional visas again. (There are many more of these now-inconvenient train tracks, and also major roads, that pass from one country into another, to ultimately get to another domestic destination.)

So we opted for that other quintessential Central Asian transport solution, the shared taxi. In Tashkent, the shared taxis to Fergana depart from a stretch of land to the NE of the town, so we first took a taxi there. Upon arrival, we were, literally, besieged by some 40 or 50 men, all wanting to offer us their vehicle. Lots of pushing, shuffling, trying to get hold of our suitcases, yet, if you would have thought that this obvious example of supply and demand would create a flexible price, you’re wrong, the fare is fixed, everybody offers the same, about US$10 per person. So in the end we selected a friendly-looking guy – who turned out not to be the driver – and got in the back of a shared taxi. Very comfortable. 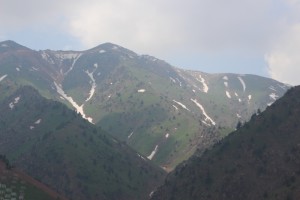 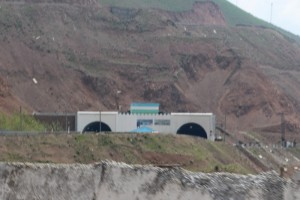 and this is the tunnel entry into the valley – everybody in the shared taxi panicked when I took this, obviously a highly sensitive strategic issue, most forbidden to photograph

To get to the Fergana Valley, we need to cross some mountains first. These days, a series of tunnels avoids the need to get over the pass, and shortens the ride somewhat. But tunnels, that is strategic national interest, of course, so photography forbidden. Also, thanks to total paranoia with who gets in and out of the Valley, there are several police and military check points, and sure enough, foreigners need to register – this means that passport numbers are being written down, by hand, in a large folio; who on earth will ever look at that again, beats me, but perhaps I should add that the Fergana Valley is not only a more religious part of the country, but in the past also the most troublesome, for the authorities. If anywhere, it will be here that the Islamic revolution of Uzbekistan will start, or so the government makes everybody believe – and uses this as a convenient argument justifying their ruthless approach to anything that smells of dissident. 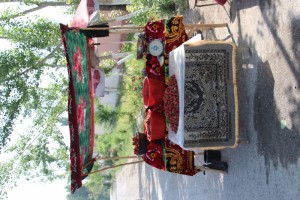 it is strawberry season, all along the road people are selling them 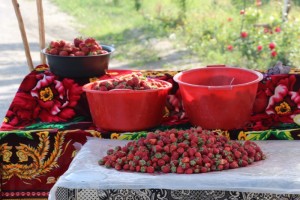 and they are delicious! 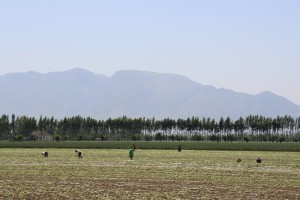 cotton is the main crop – the only crop, almost – in the Fergana Valley

Once back down in the Valley, landscape is not particularly attractive. Extensive irrigation has been used to establish a cotton mono-culture, wherever you look are cotton fields, now with just some small emerging plants in endless rows, but at harvest time in the autumn the fields will be full with cotton workers; school children, students, civil servants, everybody will be called upon – euphemism for “is forced to” – to help, to achieve the production targets that are still set by the state. Who is also the sole buyer, through one of the companies owned by the elite; needless to say that prices are set by these same companies; needless to elaborate about the price level, which is ridiculously low. 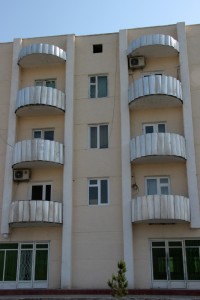 even the balconies and the palatis look better, newer in Fergana

Fergana itself – the town – is another of these spaciously laid out cities, with a lot of green. Somehow, it doesn’t have the air of creeping in decay that stuck us in Tashkent, things look better maintained, of perhaps just more recently constructed. Strikingly, the dominant business seems to be photo studios and ‘aviakassa’, or travel agencies, both of which are way over-represented in town; I have no idea why. There are restaurants, mostly fast-food, another popular business, with terraces outside, very pleasant, but not many serve beer, quite possibly the influence of stronger religion, or simply because there is no market for it (which is related, of course). Our hotel, not the newest of hotels, was the first hotel since many years of travel experience that did not have internet, or wifi. And they were quite unapologetic about it, “maybe next time when you come”. 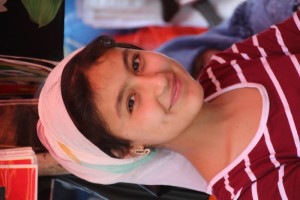 the future of Uzbekistan 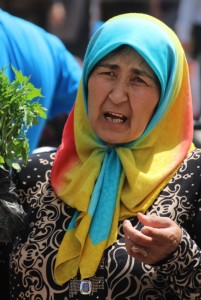 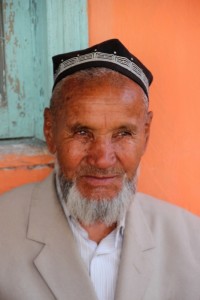 and another Uzbek man, with skull cap 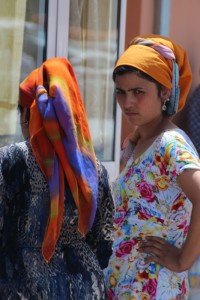 not everybody is charmed by me taking photos… 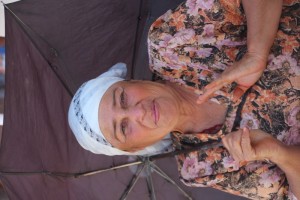 but plenty people enjoy the limelight (and eternal fame on theonearmedcrab) 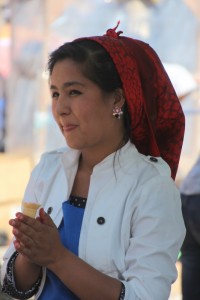 more of the future

There is nothing to see, in Fergana, yet, we had a very pleasant few days. If these people are Islamic terrorists, let the whole world be Islamic terrorists; never have we encountered friendlier, more helpful people. Having got lost looking for a silk factory, somebody asks if he can help, in Uzbek, and when we have difficulty communicating, calls a friend on his mobile phone who speaks English, and can explain us how to get back. Using a pitch dark underpass in the evening to cross a busy road, a youngster hurries to our aid with the light of his phone. Trying to ask the way to a specific shop, and once more lost in communication, no less than three young people turn up to see if they can help. And so many more examples. The problem is that your problem becomes their problem, and they will go out of their way to solve it, even walk you to the shop if necessary.

So, no monuments, perhaps, but a monument to the Uzbek people: God knows that they have suffered multiple despots, lunatic, or paranoid, or both, from Tamerlane to present-day dictator-for-life Karimov, yet it doesn’t show in their dealings with what they consider to be guests to their country. How often didn’t we hear “hello, welcome to Uzbekistan”.

One Response to 16. the Fergana Valley