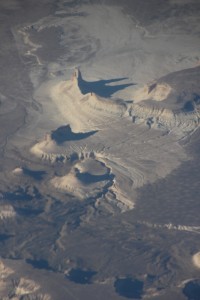 The end of the journey, to Tashkent and back to Europe across the Kyzyl Kum desert

As our flight back home departed from Tashkent, we made our way back to the Uzbek capital, via Khujand, Tajikistan’s second city and another old Khanate, but with not enough time to explore properly, we just passed through. The one thing of note we did was cross the Syr Darya, that other big river, called Jaxartes by the Greeks in antiquity, which also empties in the Aral Sea – or used to empty there, now it is being drained for irrigation of cotton in the Fergana Valley. 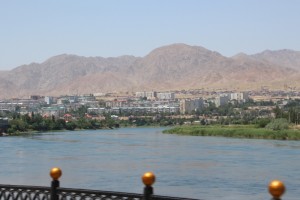 the Syr Darya, in Khujand

The border crossing between Tajikistan and Uzbekistan went as all our border crossings, smooth – yet we hear so many stories of people who have great difficulty at these borders, delays, harassments; I don’t know, perhaps it is just our relaxed attitude, but we mostly discussed the swallows in the nests inside the customs office, and we never had to open our bags. We spent our last weekend in the relative comfort of a good hotel, enjoyed some nice food, and visited the arts museum that was closed earlier on. We didn’t find the painting of K.L.Osipov, but we found lots of other paintings, including further avant garde works no doubt frowned upon in earlier Soviet times, as well as attractively displayed carpets and felts, wooden doors, armoury and parts of Bukhara and Samarkand buildings. A really nice museum. 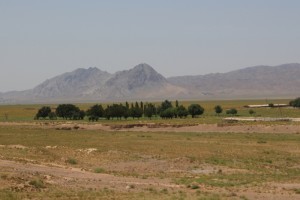 countryside at the Tajik – Uzbek border 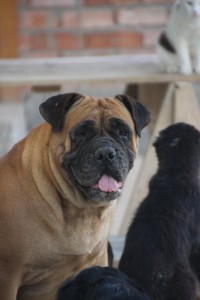 a dog at the animal shelter 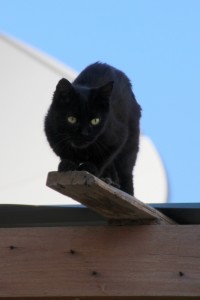 and a cat, a little uncertain

The Sunday afternoon we spent with an acquaintance we had met earlier, who runs an animal shelter with her mother. An incredible place, full of cats and dogs, who happily seem to live together, even eat from the same plate, the young ones wandering in and out of the kitchen, the older ones kept outside in a large garden. Running such a shelter anywhere else is already a challenge, but in Uzbekistan, where most people really don’t understand why you should do something like that at all – what’s in for you? – this is quite a feat. Requiring quite a lot of commitment. 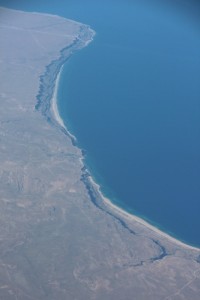 the Caspian sea shore, from the plane 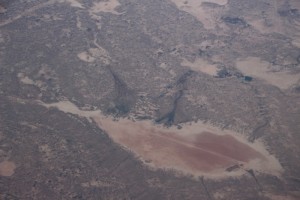 perhaps this is why the desert is called Kyzyl Kum, the red sand 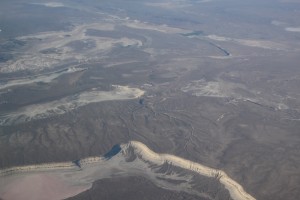 structures you wouldn’t see from the car

The early morning flight back – once again, like our outward flight, rescheduled – cruised across the desert for a long time, which from the air is actually quite beautiful, wholly different from the mountains of the past weeks. We flew over Nukus, where we started our journey, and over the Amu Darya, still an impressive river from the air. But mostly, we flew over endless stretches of sand, which nevertheless show quite a lot of variety when viewed from above. Whether we would have appreciated this equally down below, from the windows of a car, I doubt it. But have we seen a lot, this journey, have we seen a lot! and this is not an avant-gardist painting, but Russia from the plane