45. the way back Some history 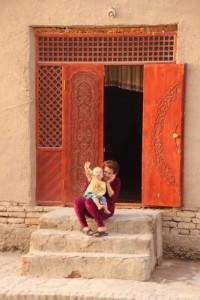 people everywhere in Central Asia are friendly and hospitable

Some impressions and observations that haven’t been covered yet, during our Central Asia trip

In the end, our six-and-a-half weeks in Central Asia has become much more than our initial, 15 year old plan to do the continuation of the Silk Road. We ‘did’ the oasis cities Khiva, Bukhara and Samarkand, but we also used the opportunity to see the extraordinary museum in Nukus, as well as further Russian and Soviet avant garde art works in Tashkent and Almaty. We admired the architecture, the blue-tiled mosques and madrasses, the old minarets, but also the Soviet-style ministries and theatres, the decorations in metros, the mosaics outside and inside. And not to forget, the extraordinary creativity of the people who extended their palatis – fantasy-lacking, as well as lift-lacking, half-high apartment blocks – through closing their balconies, a fascinating aspect of every Soviet-era town. We have seen every conceivable type of market or bazaar. We travelled not only the desert of Uzbekistan, but also the green hills and blue lakes of Kyrgyzstan, as well as the high mountains of the Pamirs in Tajikistan. We even crawled along the Afghan border. 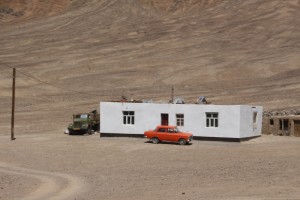 one of the similarities: bright-coloured Ladas everywhere 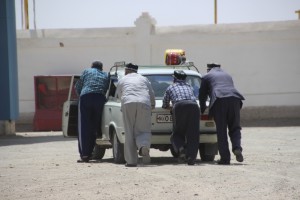 and another one of the similarities….

The notion that Central Asian countries are all a bit the same, needs refinement. Yes, there are similarities, which is on the one hand inevitable, after 70 years of Soviet domination, yet on the other hand you would have expected quite a bit more differentiation, after 25 years of independence. The lack thereof is perhaps more a lack of progress, lots of people still think life was better under Soviet rule; it is striking how little individual initiative there is, except from moving from the rural areas to the cities. Agriculture is still mostly cotton culture, and especially in Uzbekistan not much has changed in terms of forced labour for the harvest, and state-controlled, and thus artificially low prices. Far too many people are just walking their animals again, nothing else, after having lost their communism-guaranteed job 25 years ago. There are no industries making anything, and mineral exploitation is still mostly in the hands of foreign, Russian or Chinese, companies – and western oil companies in the case of Kazakhstan. And is still mostly exported, no value added in-country. 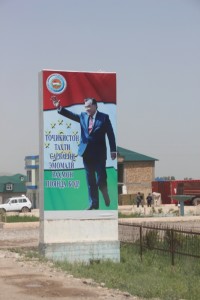 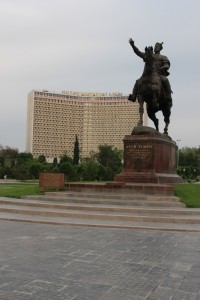 No doubt this is largely a function of repressive, dictatorial regimes in many of the Central Asian countries, regimes that have a strangle-hold over everything remotely lucrative: cotton, but also leasing of air bases to American and Russian forces, or trafficking of drugs from Afghanistan via Russia to Western European markets, to name just a few money-spinners. There is enough in the Central Asian reading list to convince you that these regimes are pretty nasty, many of the dictators are already in power from before independence, as Soviet commissioner. Their excuse is invariably the fear for jihadist infiltration and take-over, and it is impossible to assess how real that fear is. In Uzbekistan and Tajikistan especially more religious Muslim movements that would be interested in playing a political role are forcefully repressed, but how extreme, or not, these are, is anybody’s guess. Of course, repressing them won’t make them less extreme, that is for sure. 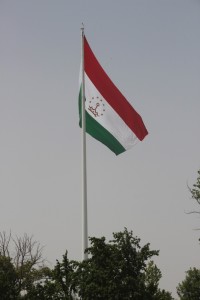 nationalism expressed in the flags 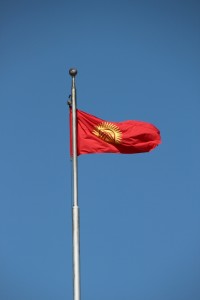 flags in every country 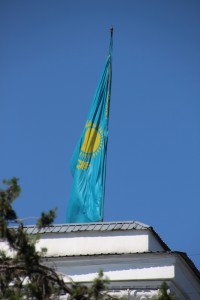 even if not always convincing

What doesn’t help, either, are ethnic tensions, in all of the countries we travelled through. They have come to the boil before, for instance in the case of Uzbek minorities in Osh in Kyrgyzstan, and they are bound to keep playing a role. The large oasis cities of Bukhara and Samarkand are Uzbek, but the business elite here is Tajik, many of whom are, forced or otherwise, leaving, which brings more Uzbeks in for them unusual, but powerful positions. The Eastern Pamirs in Tajikistan are almost entirely populated by ethnic Kyrgyz, who do not seem to get much financial transfer from the much richer west of the country. And in Kyrgyzstan itself power seems to fluctuate, from revolution to revolution, between the northern and the southern tribes, despite all being Kyrgyz. 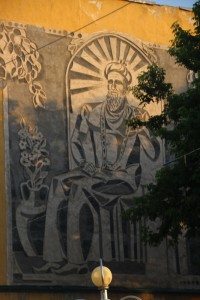 So despite having shared the region for thousands of years, and having been overrun by armies, not only murdering but also raping, during their entire history – think Alexander the Great, Ghengis Khan, as well as local hero Tamarlane, and the tsarist Russian and later Bolshevist occupation -, despite all this, ethnicity matters in Central Asia. Uzbeks, mostly Turkic-type settlers, are clearly different from more Mongolian-looking Kyrgyz nomads, Kyrgyz are different from the sharp-featured Tajiks. Although quite a few have left in the past 25 years, Russians are still an important part of the population mix, not in the least because many don’t have a place to go to, they were born in Central Asia. Chased by Chinese in the 19th Century, there are Uiygurs in parts of Kazakhstan and Kyrgyzstan. Deported here during WWII, there is a Korean minority, one that doesn’t speak Korean anymore. And despite sharing a longer or shorter common history, none of those groups have mixed a lot. 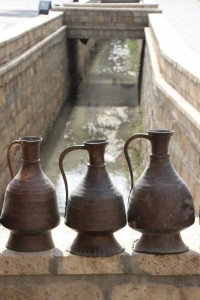 water is key to the politics of the region

All of this makes Central Asia a fascinating region for the traveller. An enormous variety in things to do, and in things to see. An enormous variety in landscapes and natural beauty. A rich, if somewhat repetitive, history. And a tantalising variety in ethnic versus national identities – ask our Tajik driver of Kyrgyz ethnicity which football team he supports, Tajikistan or Kyrgyzstan, and he admits that he doesn’t know. How further, with Central Asia? What happens whenever the dictatorships expire, through revolution or natural death, is anybody’s guess. But it seems to me that, for the moment, institutions are too weak to survive any upheaval without forceful, and by nature undemocratic, leadership. Whether that comes from an expanding Russia, or from a religious revival in one form or another, or perhaps from one or more new, internal, and more benign forces, I don’t know. Future will tell, I certainly cannot.

But let that not stop you from visiting the Stans, if you can! 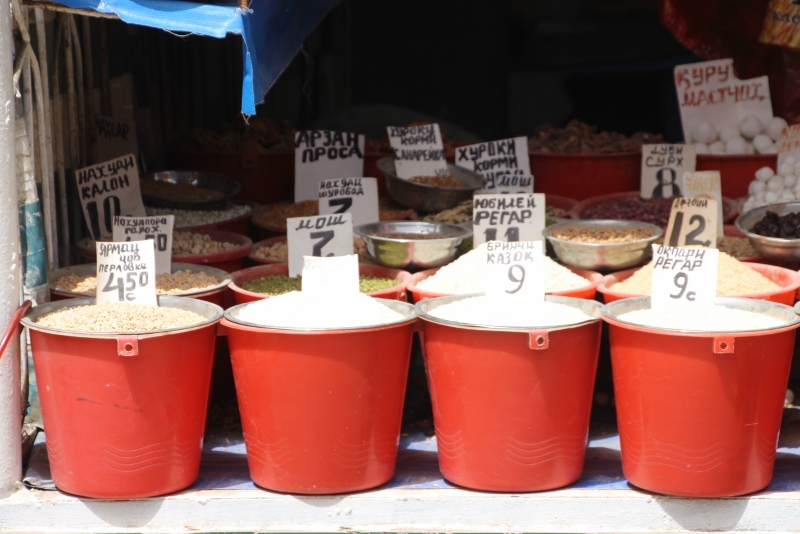 and so is food, markets, business