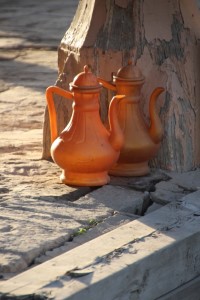 Back in the lowlands, Istaravshan is a pleasant town, with mosques and markets, and with our own palati experience

Across yet another mountain ridge – or rather, through yet another mountain ridge, as we pass through the Sharistan Tunnel, a Chinese-built piece of engineering that contrasts sharply with the Anzob Tunnel -, we get once more into a different country. No more high mountains, except in the far distance, here we enter lowly lands again, agriculture and pastoralism exercised seemingly in harmony.

The main town is Istaravshan, also referred to as a poor man’s Bukhara. But it isn’t, really, Istaravshan is a city on its own merits, and just because it has an old town doesn’t call for any comparison. In fact, the old town isn’t that interesting: we had hoped for some atmosphere, but life is mostly behind closed doors, in closed-off court yards. The few times we were invited for tea was by men who were rather loud, unshaven, and strongly smelling something wholly different than tea. But the old town does have its gems, like a tall minaret from Timurid times, a rather new-looking wooden mosque next to it, and a much more attractive, authentic looking wooden mosque deeply buried in the maze of small streets. The postcard picture of the town, however, comes from a madrasse with lots of tiles and a blue dome – perhaps this is the reference to Bukhara? – called the Kok Gumbaz (which means as much as ‘blue dome’). 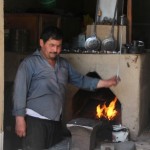 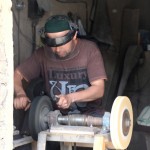 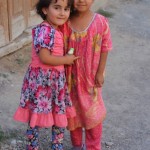 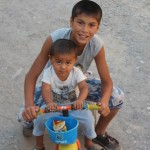 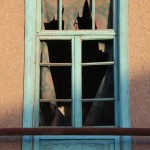 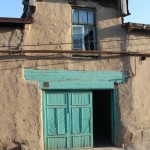 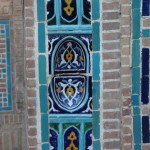 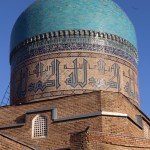 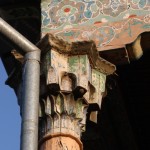 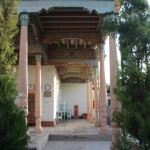 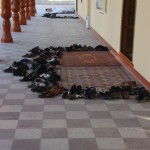 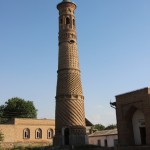 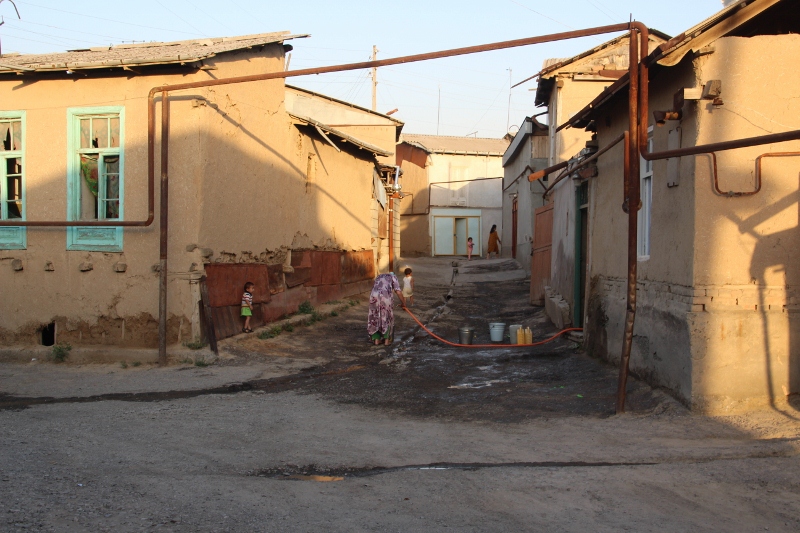 street scene in the old town, with the gas pipes outside houses 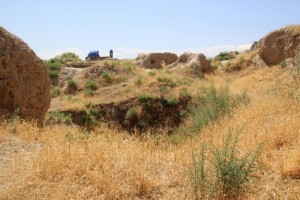 the Sogdian fortress remains, with the newly-constructed Mugh Tappa in the back

Just outside town, on a hill, is the Mugh Tappa, another modern reconstruction of the original fortress gate way, and as reconstruction not particularly interesting. Which was compensated, however, by the traces of an old Sogdian fort on the same hill – my guide book says that ‘it bears more than a passing resemblance to builders’ rubble’, a little unfair as the same book called Penjikent, which looks very similar, but just a little bigger, ‘the Pompeii of Central Asia’. Quite a few structures can be recognised as such, which is the more impressive once you realise that this was one of the fortresses attacked by Alexander the Great well over 2400 years ago. 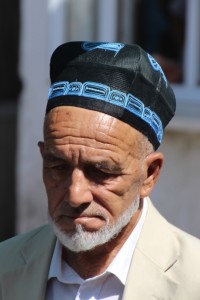 a man in the market 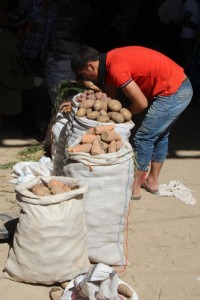 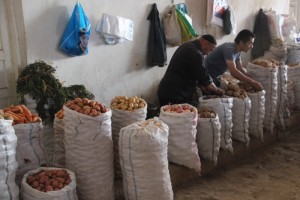 all sorts of potatos and carrots around 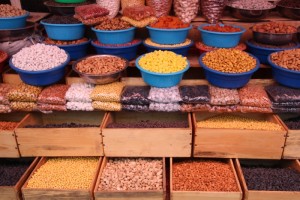 We are back in flat lands, pretty much Uzbek-dominated so near the border, and the effect is immediately visible in the bazaar. No containers, or very few, but well organised sectors for plastics, food, and especially carrots, potatoes and onions; I have never seen so many of those together! One area Istarafshan is famous for is its crafts people, smiths still forging tools by hand. 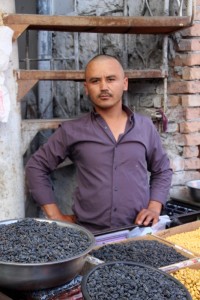 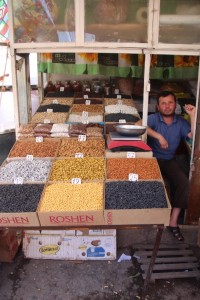 and many more sultanas, raisins, nuts 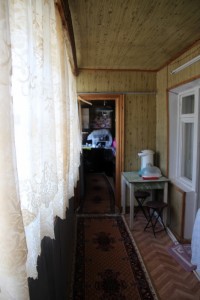 our own closed-in balcony 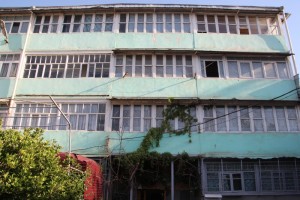 our palati guesthouse, first floor on the right 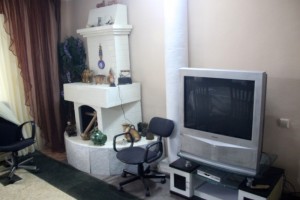 inside the palati, fake fire place and real television

But all of this fades into obscurity compared to the highlight of our stay in Istaravshan, highlight of the trip, perhaps. You must have noticed my obsession with palatis, the featureless apartment blocks of the Soviet era, which you find back in each and every Soviet-influenced country. My Romania and Bulgaria blog shows quite a few examples, and this trip we have seen many more, in all different stages of abandon. And now we had the opportunity to stay in one! Our guesthouse essentially comprised of several apartments, in a palati, and one of them, two rooms and closed-in balcony, was ours for the night. Fabulous! A dream come through – just for one night, of course, more would be a nightmare. 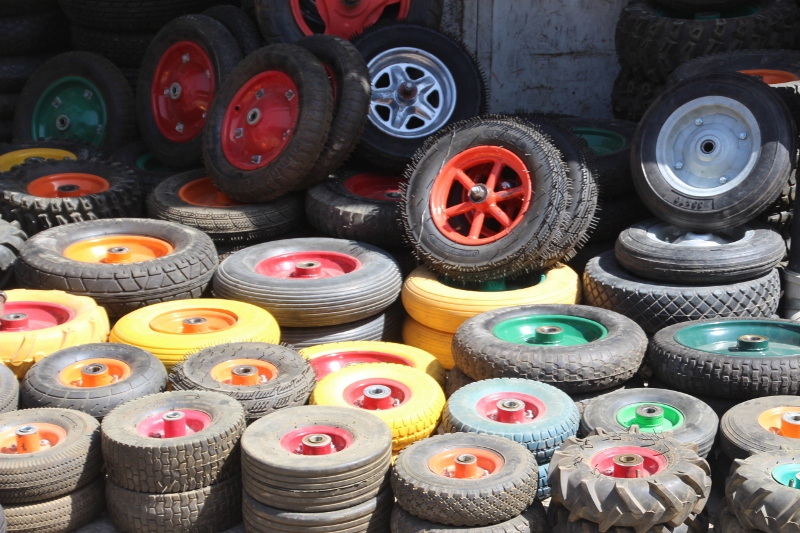 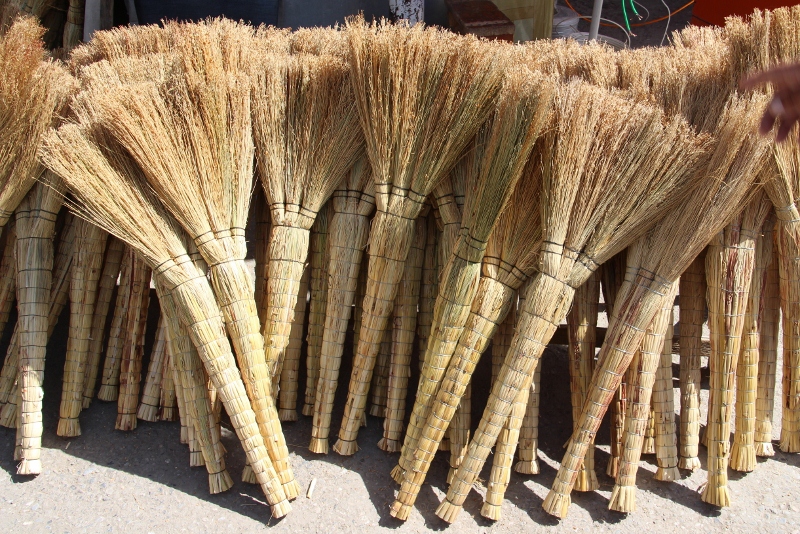 and brooms, in the market