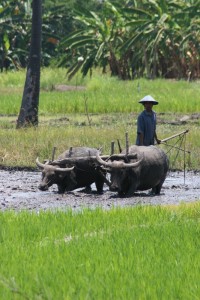 work in the padis near Larantuka

From Ende land inwards, to Moni and the Kelimutu crater lakes, and then on to the north coast beaches, and the towns of Maumere and Larantuka 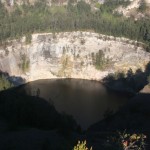 The road continues inland, zigzagging through the mountains, valleys dominated by rice padis – beautiful in the late afternoon sun – to Moni. This small village is the base for Flores’ biggest tourist attraction, the three differently coloured lakes at the top of Kelimutu volcano. In fact, to facilitate the hordes, a tarmac road up the mountain reduces the four hour climb to a half-hour drive, and a 15 minute stroll across a well-laid path and on concrete stairs, to Inspiration Point, another concrete monument from where all three lakes are visible. As with all these attractions, sunrise is touted as the best time to visit, so at 4 am there is a flurry of activities in preparation of the ascent – and my hotel was such that, like it or not, you ‘ll wake up. In this case, someone had started a truck engine next to my room at 4, and helpfully blew the horn a little later, to ensure that everyone knew about it. In reality, it is probably best to get up much later, and avoid the chill at the top, and the wait until the sun is really high up, which is when the lakes start taking their distinct colours of turquoise, black and brown. And the best place to see the lakes is in fact at the crater rim, where there is a promontory that allows you to sit in between two of the lakes, with a fantastic view – but not for the faint hearted, or those suffering from vertigo, as the crater walls plunge vertically down to lake level, perhaps 100-200 meters below. 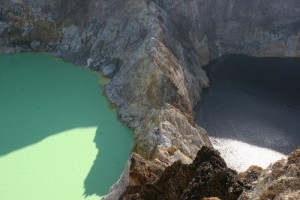 two crater lakes, with a natural barrier in between 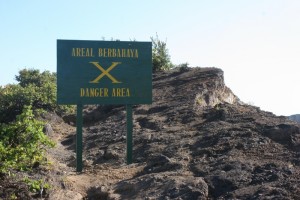 they are steep slopes, into the lakes… 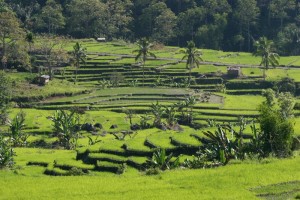 the padis near Moni, in the early morning sun 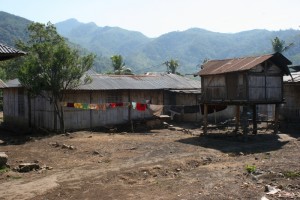 a court yard in Moni 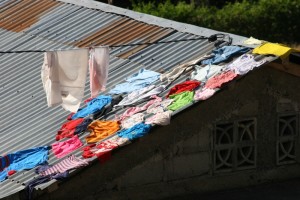 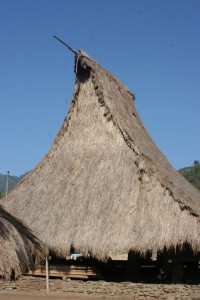 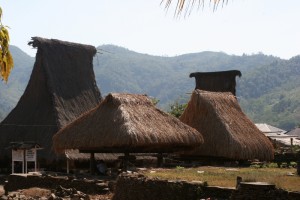 Driving back to Moni was also beautiful, as in the early morning sun the light green padis were as spectacular as they get.

The village itself supports a Rumah Adat, but for the rest the place it totally geared up for the tourists, and not in the best sense: arrogance, poor service, and worse. So leaving was not that difficult, except that my driver had disappeared….

Stranded: Moni was also the place where my driver decided to abandon the trip, and worse, to take the car with him. He had asked for an extra advance, to replace the badly damaged flat tire we had had the previous day, and he must have coolly calculated that he had now received more than he was due on a daily basis, and thus he left, back to Labuanbaju, whilst leaving me in my hotel waiting for him to change the tire – which he no doubt never bought. He did have the decency to leave the three plastic bags with artifacts I had bought on the way somewhere along the road opposite the hotel, something the hotel staff casually pointed out about an hour later – they were obviously part of this scam, as well as everybody else around me, making me feel even more stupid than I already did. An unfortunately negative blob on an otherwise very positive journey. Luckily I got a ride from other tourists, 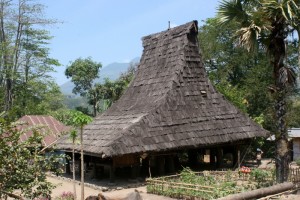 one of the traditional houses in Wolomere 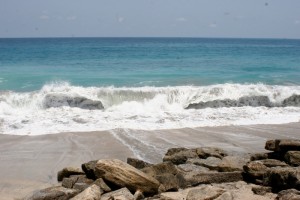 the surf at Paga beach, on the north coast 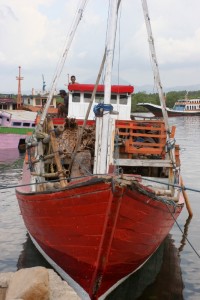 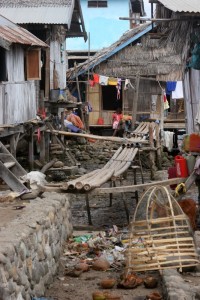 the village of Wufing, largely on stilts 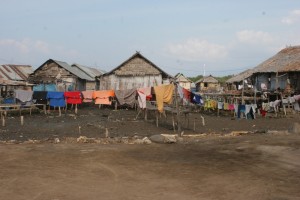 where the women of Wufing dry their laundry 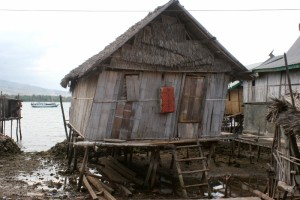 one of the village houses, at low tide 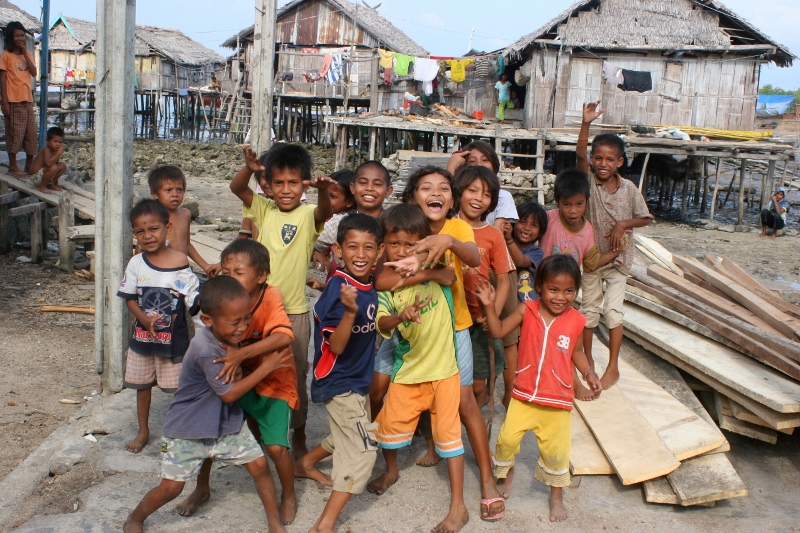 at least the kids have a good time, posing for the photo

It took only 3-4 hours to Maumere, the largest town on the island, despite stops in Wolomere, yet another type of traditional village with another type of houses, and Paga, at the beach, a delightful stretch of sand and a strong surf. Just before Maumere is Wufing, a fishing village largely built on stilts.

Maumere being the biggest town on the island still does not mean much, you explore the center in less than an hour, spending most of the time in the harbour, which sees some big passenger ferries. 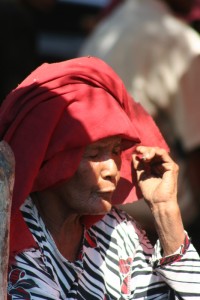 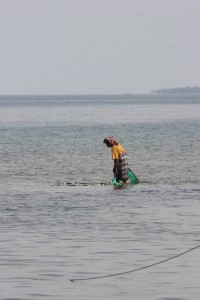 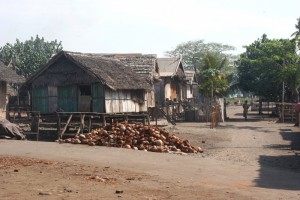 the dusty village of Nanggaha 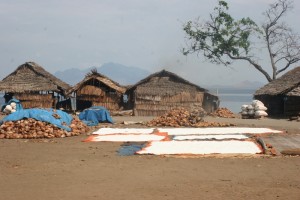 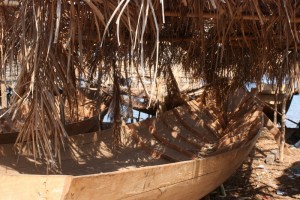 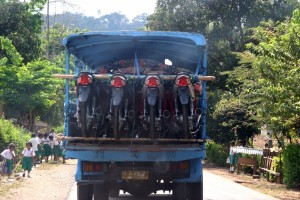 the preferred way of transport, being transported 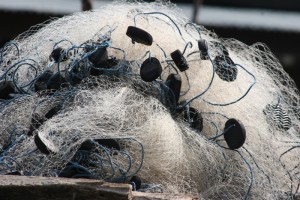 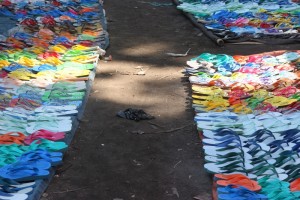 plenty flip-flops for sale in the Talibura market

East of Maumere the road follows the coast, past Gunung Egon, another volcano, and past some very beautiful villages, like the boat building and salt processing center of Nanggahale, and the market village of Talibura. Then into the low hills, and under the towering presence of the twin volcano Lewotobi, with the peaks “male and ladies”, according to my driver, and down to the east coast – padi culture area again – and the busy small port of Larantuka, with a flurry of activities and boats and ferries coming and going, to further away parts of the archipelago. 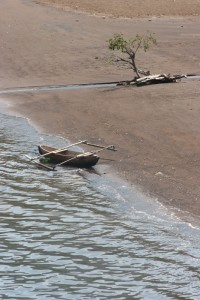 fishing canoe along the beach

The Merpati Airlines officer in Maumere had advised me to be at the airport no less than 2.5 hours before departure, as manual check-in was going to be slow, especially with the no less than 100 passengers he expected. Based on my earlier experience with Merpati, 100 sounded optimistic, and my concern was more flight cancellations rather than overcrowding, In the event, there were just enough people to justify a flight, and check in – 1 hour ahead of departure time, to be sure – took less than 2 minutes, at a clearly oversized airport, at the end of a specially built and very wide approach boulevard, and all of that for the two flights a day that Maumere sees. 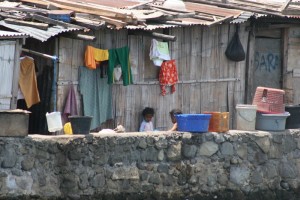 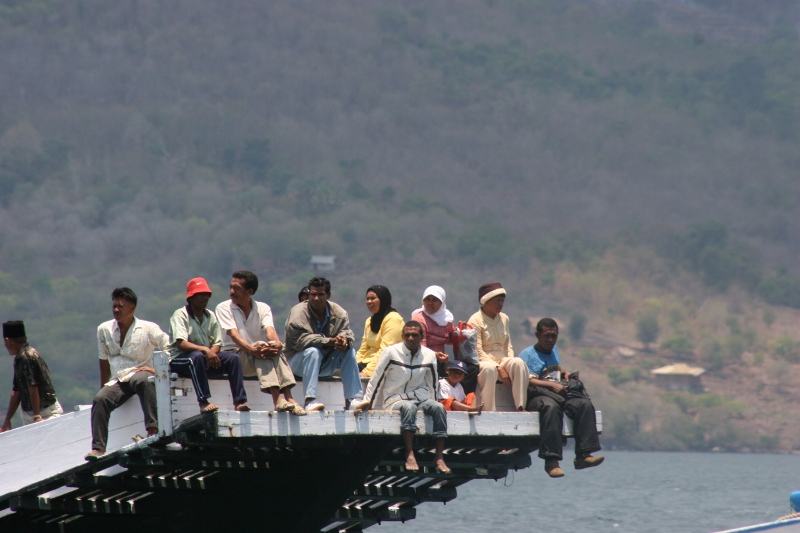 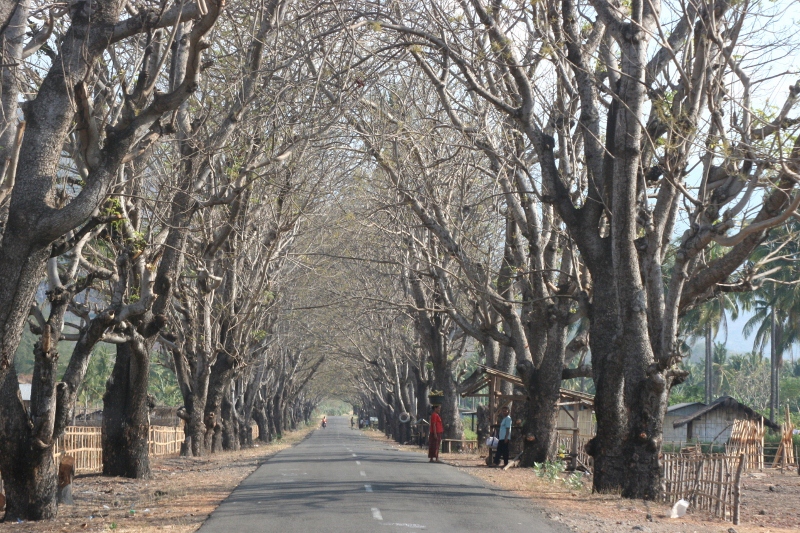