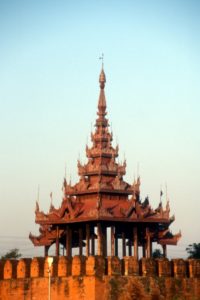 watch tower on the wall of the Mandalay Fort

The old Myanmar capital is, as so many other places here, quite run down, but is surrounded by fascinating ‘deserted cities’, full of temples and pagodas, also in various states of disrepair. 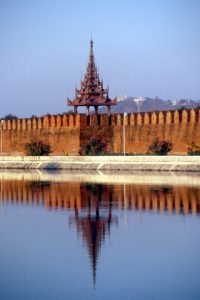 the wall and moat of the Mandalay Fort

Mandalay is the old capital of Myanmar, before Yangon got promoted by the British. ‘Old’ in this respect is relative, because the city was only founded in 1857, so served as capital for barely 30 years, yet, the city, the second largest in Myanmar is still an important cultural centre. Mandalay itself has little to offer: the local palace, home to the last royal dynasty of Myanmar, defeated by the Britsh in 1885, has been heavily restored, and all other buildings in the city are in various stages of disrepair. The Mandalay Fort, which was constructed in the 19th Century but burnt out after WWII fighting between the Brits and the Japanese, is impressive from the outside. However, its restoration – mostly using convict labour – has produced awful results, as so often in this country. 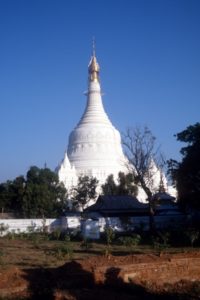 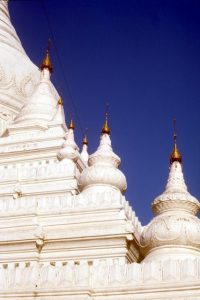 detail of the Ava pagoda, and all the little pagodas 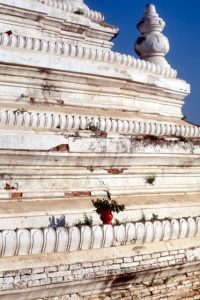 the side of a temple in Ava 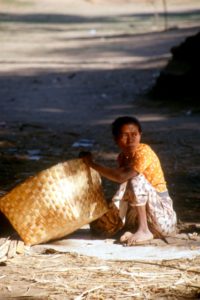 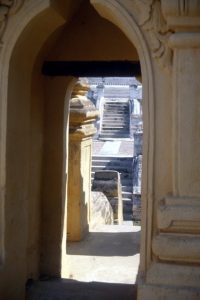 entry to a temple in one of the deserted cities 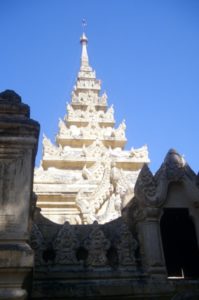 another temple, same deserted city (I don’t know the name) 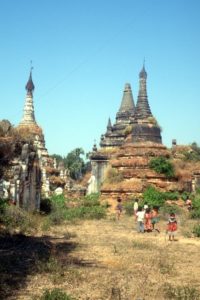 children playing in between the deserted pagodas 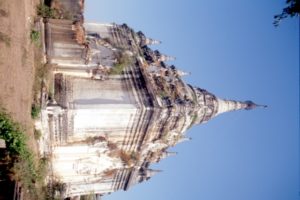 a stupa, overgrown, in one of the deserted cities 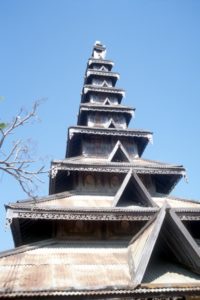 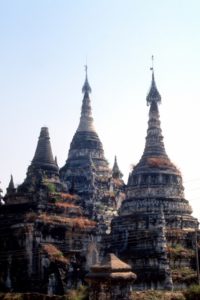 deserted pagodas in a deserted city 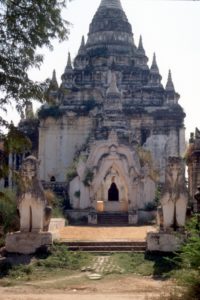 The main reason to come to Mandalay is to visit some of the fabled old cities that surround the town on both sides of the Irrawaddy River. These vary widely, some being not more than a collection of old, crumbling buildings, like Ave, and others vast sites of ruins, with villages in between. Across the river from Mandalay is the deserted city of Sagaing, this one with its stupa structures all rebuild, restored or repainted. Temples and pagodas scattered around; quite impressive, especially if you take the trouble to climb to the top of the hill here, which provides a view over the surrounding collection of abandoned religious real estate. 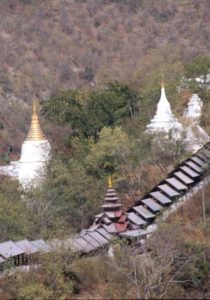 pagodas on Sagaing Hill, and the way to the top 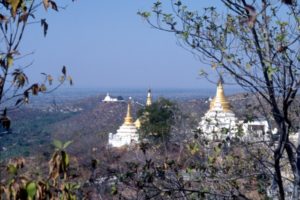 the view from the top of Sagaing Hill 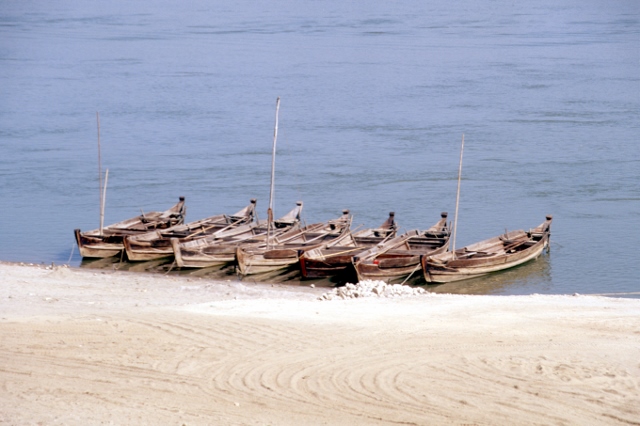 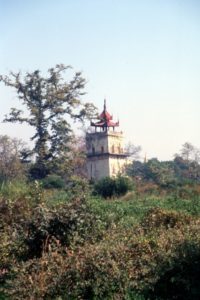 a stone tower in the middle of nowhere, part of one of the deserted cities 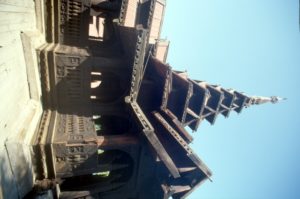 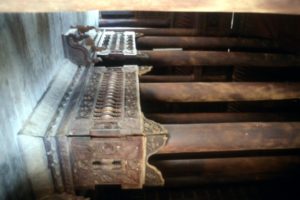 wooden pillars of the Bagaya Kyaung 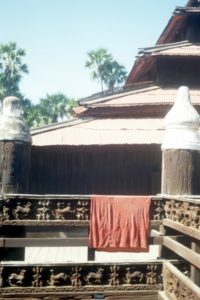 outside the wooden temple Bagaya Kyaung 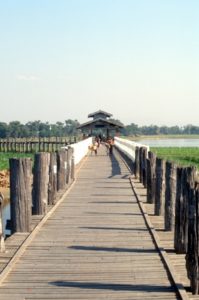 the wooden bridge near Amarapura 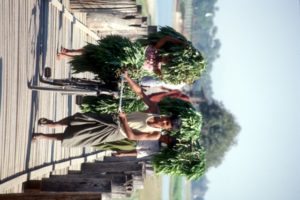 the bridge is being used 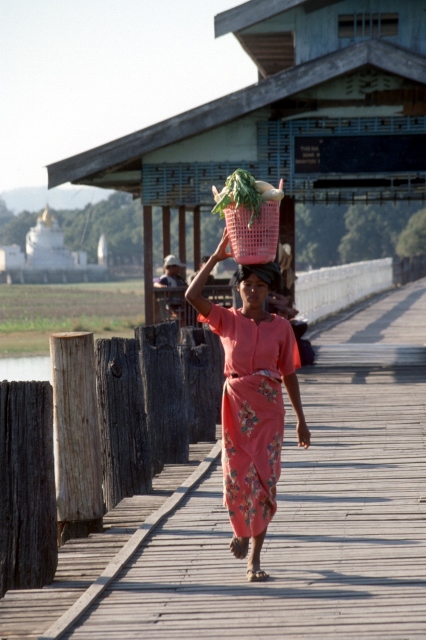 young woman on the bridge 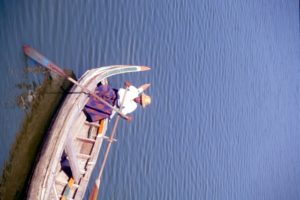 and a canoe being used

Of particular interest are the wooden buildings. At Amarapura, just outside Mandalay, a 1200 m long wooden bridge across a tributary, attractive village on one side, leads to a reasonably original temple complex, Kyauktawgyi Paya. A little further is the wooden monastery of Bagaya Kyaung, an incredible structure and proof of intricate workmanship, and still in good shape, both in terms of construction as well as religious activity.

Great place to wander around for a few days, and explore the country side, as a preparation for a visit to Bagan, the temple complex further downriver. 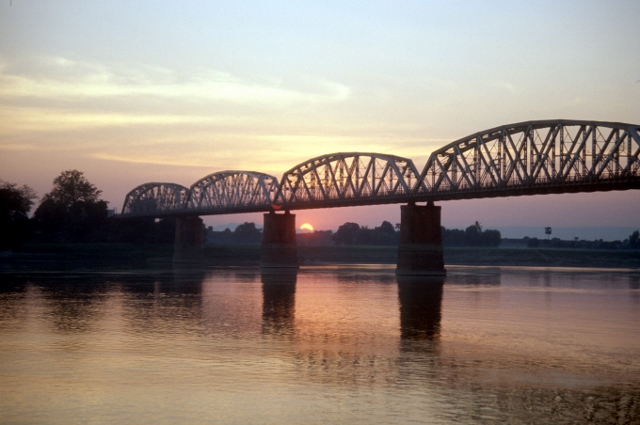 the British-built bridge at Mandalay, long the only bridge across the Irrawaddy River