The art of Dunhuang Tiya 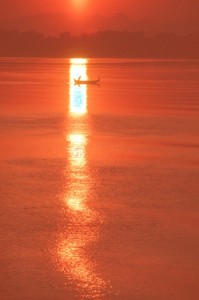 sunrise on the Irrawaddy

The 11th Century town of Bagan on the Irrawaddy River is one enormous Buddhist temple complex, impressive in its extent and in the quality of some of its architecture, mysterious in its setting.

The deserted city of Bagan dates back to the 11th Century, when the place was conquered by one King Anawratha, who subsequently established this complex of temples and pagodas on the bank of Myanmar’s main river, the Ayeyarwady (perhaps better known as the Irrawaddy). Although the earliest inhabitants of Bagan, the Pyu people, were already Buddhist, Anawratha spread the Theravada Buddhism, dominant today in Myanmar. The real builder, however, was Anawratha’s son, called Kyansittha, who used 30,000 slaves to establish what was then known as the City of Four Million Stupas. Whether there were ever so many is doubtful, but it is estimated that in its heyday Bagan contained over 6000 structures. The party lasted for a little over 200 years, until Kublai Khan ransacked the city in 1287, never to be rebuilt afterwards. Today, there maybe something like 2000 structures remaining, the rest having succumbed to earthquakes, and to the erosive power of the river. In an attempt to promote tourism, the military regime of Myanmar decided to restore several temples in the 1990s, but according to art historians they messed up badly by using modern materials and not honouring many of the ancient architectural designs. Also according to UNESCO, that still has not awarded the site World Heritage status. 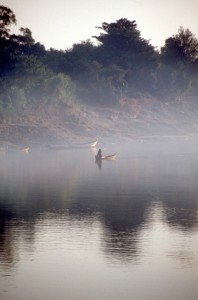 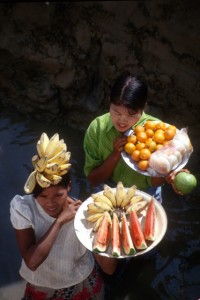 girls selling fruit along the river 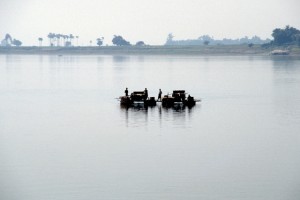 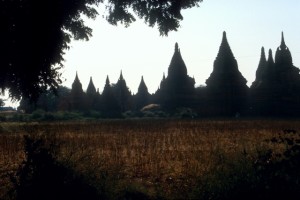 To reach Bagan we took the boat – a regular ferry – from Mandalay, a full day’s trip. We left early morning, at sunrise. Really! Worth it, for the special light, and for seeing the river waking up. There was not much available in terms of food on board, but luckily, there was plenty on offer from local vendors, wherever the boat moored to let off or take on passengers. On the way, entertainment was provided by other users of the river, and those on the river banks. Never a dull moment! 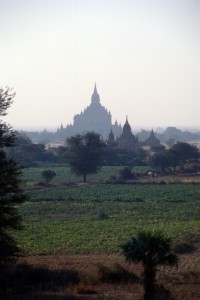 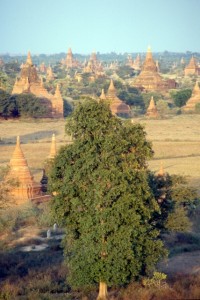 the place is full of temples, let that be clear

The first impressions from Bagan, from the river, do not disappoint. It is indeed a huge Buddhist temple complex, with hundreds of structures concentrated in the area called Old Bagan, perhaps a square kilometer (and many more outside of this centre): tombs, stupas, temples, what have you; big to very big, and small to very small; well maintained or crumbling. 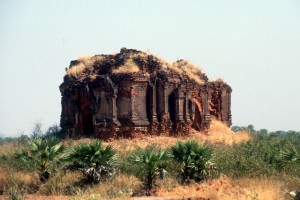 and some are crumbling 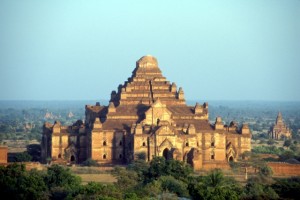 some of them pretty big, like the biggest of them all, the Dhammayangyi Temple 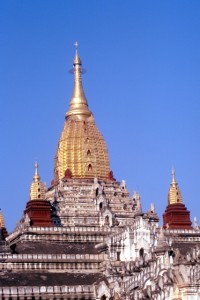 one of the better maintained temples, the Ananda temple 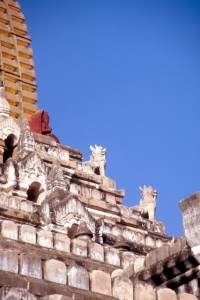 stupas of the Ananda temple decorated with small-size sculptures 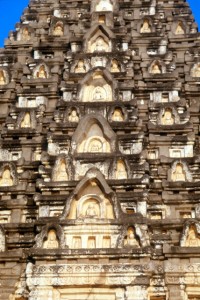 a thousand Buddhas on a stupa tower 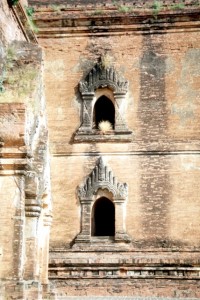 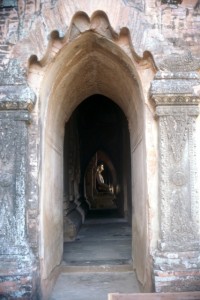 Buddha sculpture inside one of the temples 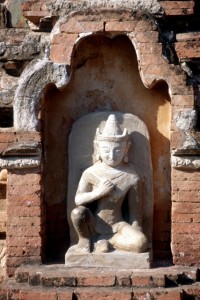 another sculpture, on the outside of a temple

Some of the buildings have been exquisitely decorated, either with sculptures, or through the design of the towers. Many of the structures are closed, there are simply no doors or other openings, at least not to the untrained eye. But especially the bigger buildings can be entered, through nicely designed corridors. There is also some inside decoration, with fresco drawings, but this is the exception rather than the rule. Artistically, they are fine, but not special. Buddha sculptures, however, are plentiful, also inside. 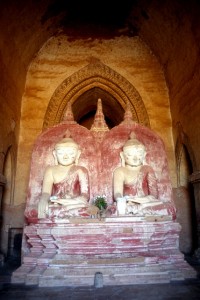 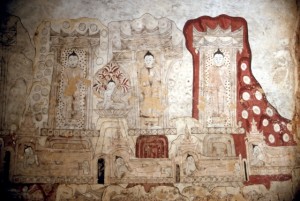 some of the walls inside have been decorated, but this is the exception rather than the rule 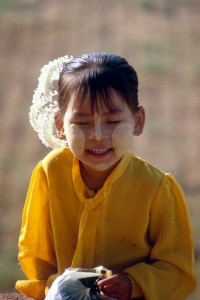 Of course, there are also people around in Bagan, and not all are involved in the tourist industry – given the size and the uniqueness of the complex a rather humble industry when we were there, early 2000, although that may now have changed. Farmers use simple equipment to work the fields, and to collect hay and fire wood. Not much mechanization here, yet. The small town has an equally small market, which tries to prepare for the tourist invasion with a brisk pottery industry. 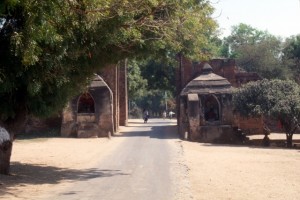 Tharaba Gate, the only remaining original entrance to the town 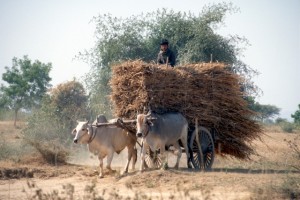 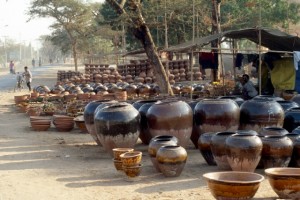 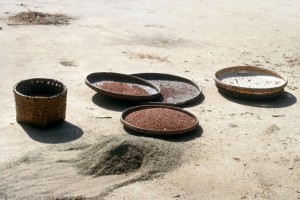 food is being sorted 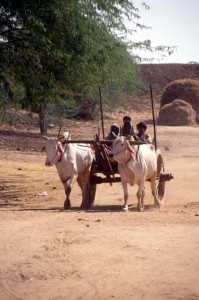 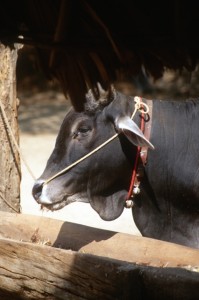 a cows waiting for the next job 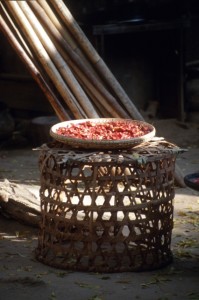 chilies in the market 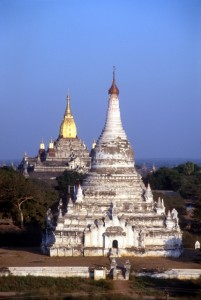 late afternoon light on the temples

All together a fabulous experience, on par with Angkor Wat in Cambodia, or the pyramids in Egypt, but – despite the restorations – so much more authentic in not-so-developed Myanmar. It is not so much individual temples that make the difference, although some are impressive. It is the sheer quantity, the density of temples on the Bagan plains that makes this a unique site. At any moment of the day, but especially so at sunset. 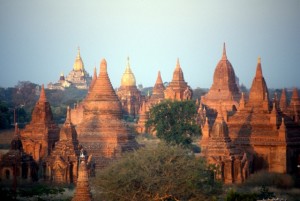 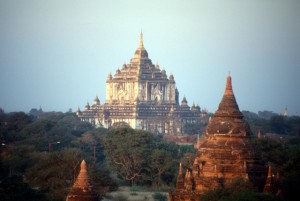 another big one, the Thatbyinnyu Temple, built in the 12th Century and shaped as a cross some towers turn golden in the light 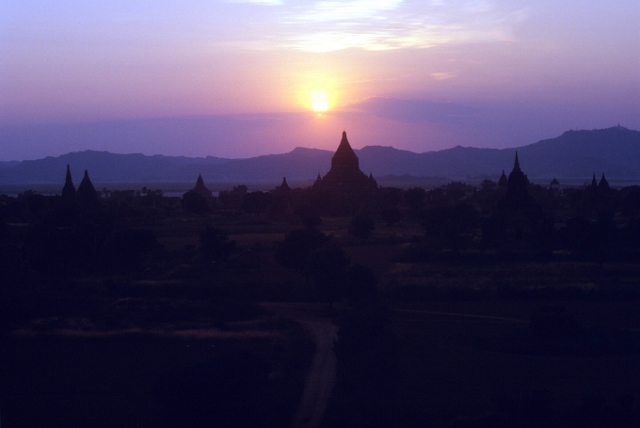