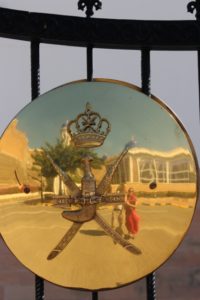 Royal shield at the Sultan’s palace in Muscat

For those familiar with the capital cities on the Arabian Peninsula, Muscat is a humble place. Arrival is at the relatively down-to-earth airport, nothing compared to the flashy neighbours (but rumour has it that this will change soon, too, and evidence of a new terminal building is there). And elsewhere in town, too, no high-rise, no ostentatious expressions of oil wealth; no senseless competition to build the highest tower or the most luxurious artificial island. Humble is the word that fits Muscat.

In fact, Muscat is a string of coastal villages, many of which have their own bay, with a beach and often a natural harbour, in between rocky promontories. Expansion is limited to the coast, in western and south-eastern direction, because behind Muscat rise the Hajar mountains. Thus where the international airport, named after Sultan Qaboos, used to be a fair bit out of town, nowadays Muscat’s urbanisation has not only encroached, but has overtaking the airport, from which a highway, also named after Sultan Qaboos, leads into the capital of Oman.

Most visitors to Muscat, including ourselves, start their exploration in Mutrah, the neighbourhood just past the main port, named after – guess who? – Sultan Qaboos. In the morning, fish is being landed here, and traded in the fish market, once again a rather humble affair. A small covered area is dotted with tables where a great variety of fish is being displayed. Rather than praising their wares loudly and aggressively, the traders are stoically sitting behind the piles, waiting for a buyer to turn up. This, too, is going to change, though: the new fish market, for what I could see from behind the fences, is an attractively designed tall round building, almost ready to be opened – I wonder what it is going to be called. 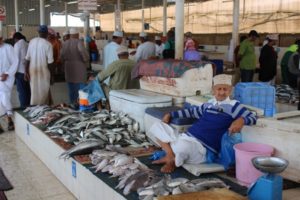 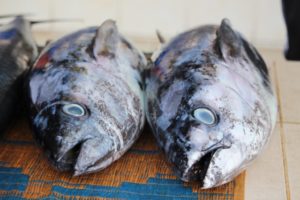 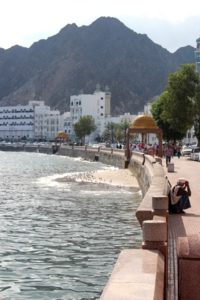 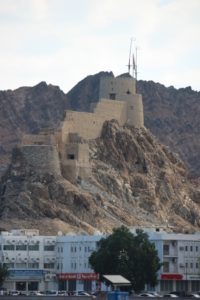 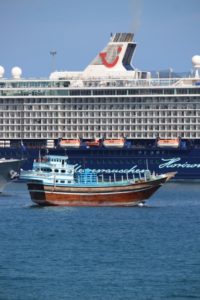 a dhow in front of visiting cruise ship in Muscat 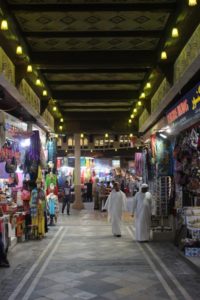 the inside of the Mutrah souq, a pretty modern passage 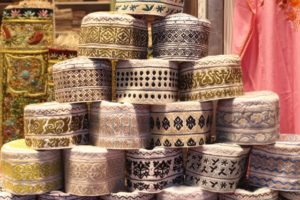 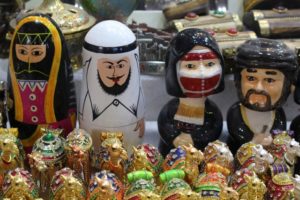 and souvenirs, depicting the local scene 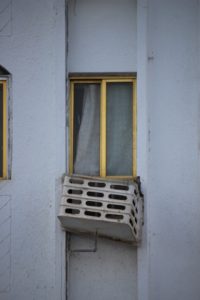 not everything along the Corniche is equally solid 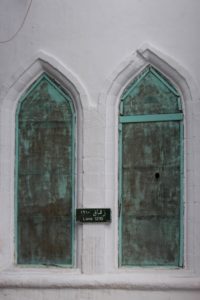 two windows in Mutrah, also not the most modern ones

The fish market is at one end of the Mutrah corniche, the sea front lined with slightly deteriorating commercial buildings. The occasional dhow (perhaps even the Royal Dhow?) floats in the harbour, but the view is mostly dominated by the huge visiting crew ships, a stark contrast. At the other end of the corniche is the Mutrah Fort, one of the few originally Portuguese 16th Century castles, and the Souq. The formal entrance to the souq looks grander than is warranted by the few seemingly not so old covered passages and the network of small alleys that make up this market area. The merchandise is dominated by souvenirs and crafts, as well as frankincense, Oman’s other export product, besides oil and gas. Some of the merchandise is no doubt produced in Oman itself, but much of it has a distinctly Indian look and feel – which is being reinforced by the many Indians, that seem to work here, as shop attendants (Oman foreign population is probably 95% Indian, Pakistani and Bangladeshi). Having just been to Iran a few months ago, the souq was in fact somewhat disappointing. What didn’t help was that the dominant customers were the hundreds, if not thousands of Germans from the cruise ships moored in the port. Who we met later on again, in almost equal numbers, in the fairly small museum Bait al Zubair…. I suppose there is a difference visiting Muscat when there are, and when there are not, cruise ships around. 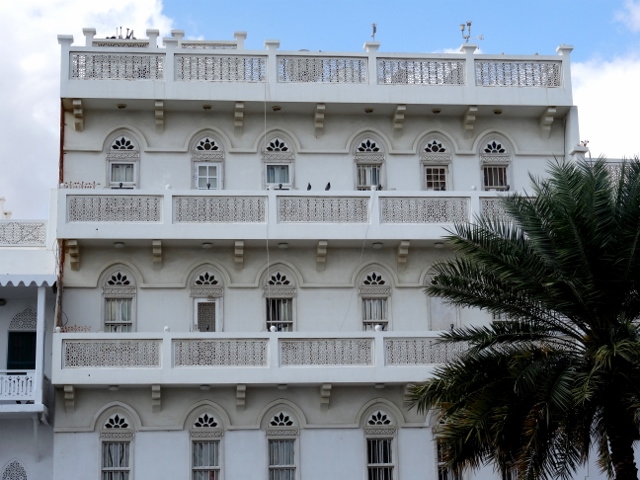 one of the buildings along the Corniche 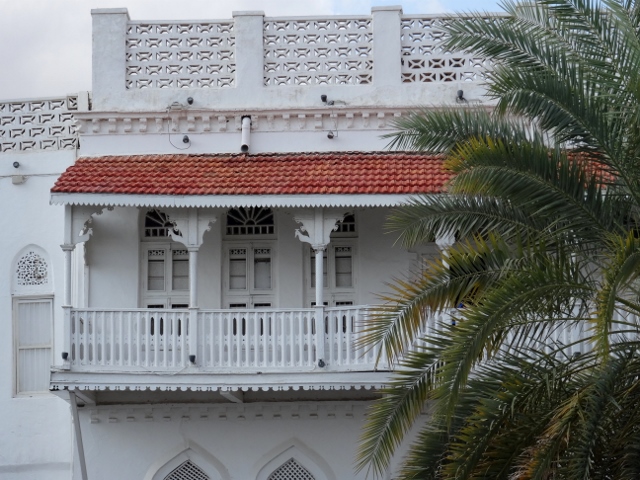 and another one, with balcony 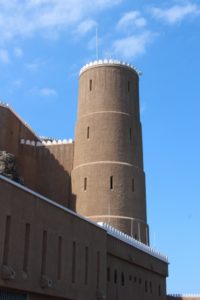 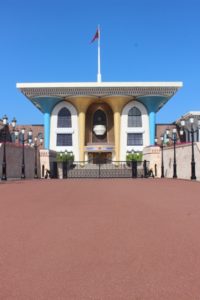 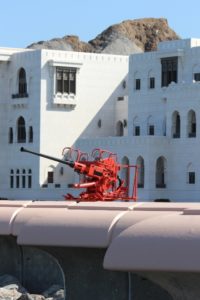 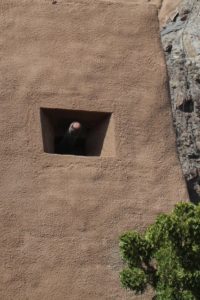 The next village, once again around a promontory, is what is called Old Muscat. But don’t expect – like we did – a maze of narrow winding streets flanked by old, decrepit houses, with children playing, women washing, men lurking the shisha. Old Muscat is the area of flashing government buildings, of the imposing national museum, and last but not least, of the Sultan’s Palace, a huge mushroom-like construction in blue and gold. The palace is defended with bright red anti-aircraft guns – obviously, no need to camouflage those, next to such an expressive building, no doubt easily recognised from the air. In earlier days the bay was defended by two imposing forts, but next to the palace they look, well, humble almost. And so look their defences. The palace is flanked by spectacular hedges of Bougainvillea, from which a wide promenade leads away to the National Museum. 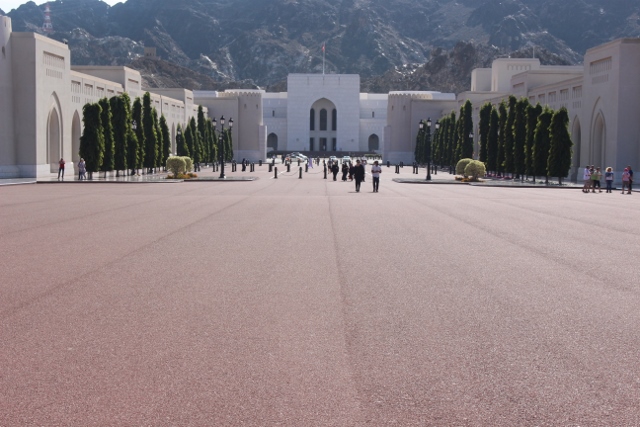 the stretch between palace and National Museum 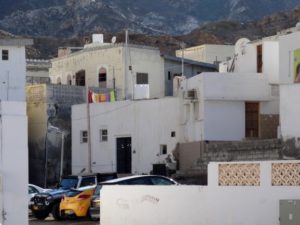 In all fairness, there is an older part to Old Muscat, just past the museum in southern direction, where older houses, with grated windows, crenulated rooftops and rusty satellite dishes. Small neighbourhood shops, ice-cream parlours and coffee houses are the only commercial undertakings here, it seems. Similar neighbourhoods appear further south along the coast, in the villages of Sidab and Haramel. One end of the beach in Sidab is given over to small fishing boats, now drawn up the sand, waiting for the next tide, perhaps. Fishermen are mending nets, cleaning engines or just sitting around, in an utterly peaceful atmosphere that is far removed from the big city around the corner. Haramel, in between the main highway and the coast, is accessible from one road only, that leads to streets lined with simple two and three story houses, and another small port. 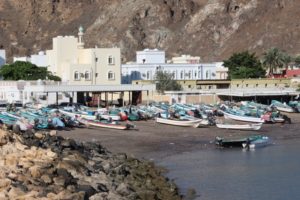 the fishing beach of Sidab 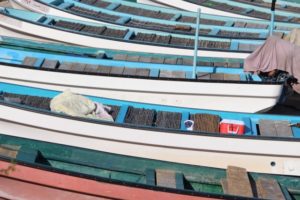 some of the fishing boats 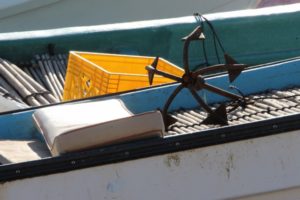 and some of the equipment on board 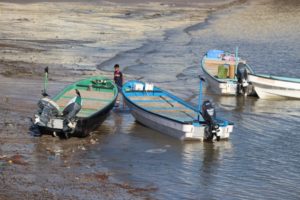 At the other end of Muscat is Al Bustan, mostly known for its flashy hotel with private beach and numerous pools, all full of people– more so than that the area is known for the parliament building, which is several times bigger than the hotel, but totally deserted – there is no visible activity what-so-ever. Perhaps that, too, is fitting this country.

next: to the Wadis 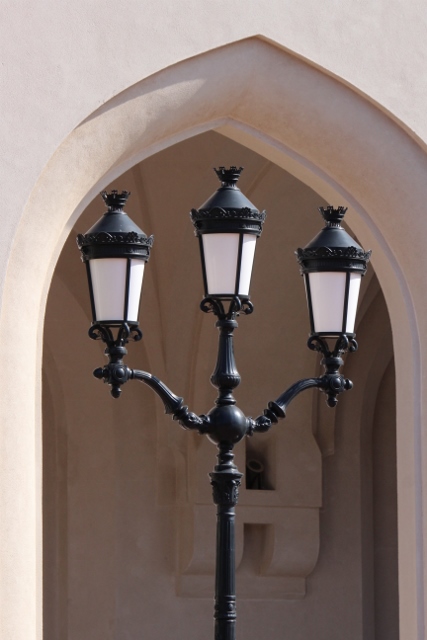 the lights on the stretch